From the RuneScape Wiki, the wiki for all things RuneScape
(Redirected from Varanus)
Jump to navigation Jump to search
The Keeper? (edit)? (edit) 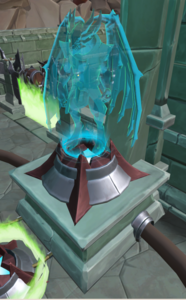 The Keeper, previously known as Varanus, is a Nodon dragonkin. He is found in the Orthen Oubliette on Anachronia.

Varanus was part of the dragonkin that escaped the Great Revision by the elder gods aeons ago.

Varanus specialized in hunting, dealing with the local wildlife that inhabited the area around Orthen. Although he hunted alone, he worked with Skeka, an Aughra mystic that helped them refine his hunting skills. One of her contributions was the ability to turn the dinosaurs' traits back on them, allowing Varanus to control a pack of varanusaurs (whom Skeka had named after him) to assist him in larger hunts. One of these hypnotic dinosaurs took a liking to Varanus, who felt sentiment for the first time.

As Varanus continued to hunt, scouts from larger landmasses reported a massive rex they dubbed Raksha, who they claimed was larger, more aggressive and intelligent than the rexes that Varanus had hunted. He expressed an intention to hunt the Raksha, seeing it as a challenge. Varanus successfully captured the Raksha, but as he was triumphing over his feat, the Raksha unleashed a fake vision, using it as a distraction to impale one of its spikes on him. Varanus was mortally wounded from this attack, as the poison was too strong and it was unlikely a cure could be found in time. The Kindra Council wished to study the Raksha, despite Varanus' concerns with how dangerous it was. Using what little time he had left, Varanus ensured that the Raksha could not harm his fellow dragonkin before succumbing to the poison. He was subsequently revered for his heroic actions and interred at a crypt north-west of the bazaar on Orthen, the crypt itself being named after him.

Unbeknownst to the other dragonkin, Kerapac was able to salvage Varanus and turned him into the custodian of the Raksha underneath the Anachronia Swamp Fortress as The Keeper, as he felt none of his fellow dragonkin should be given such a burden, coupled with being the only one with experience. Although kept in stasis, Varanus did not mind, as he could ensure that he could protect his fellow kin even after "death". However, Varanus himself was also linked to the Raksha, so whatever befell it would also affect him. He did not disclose his identity to those who visited, feeling that they would try to break him out of his second "prison" and accidentally release the Raksha.

Since the Raksha thrived on shadow anima, when the supply had been depleted, Raksha slipped into a coma, with Varanus following suit due to his link.

The following takes place during Raksha, the Shadow Colossus (miniquest).

When Kerapac drew forth a version of Anachronia to supplement his plans to kill the Elder Gods, he unintentionally brought back Raksha and Varanus. The device that he created prior to its original destruction was fully functional and began creating shadow anima, which woke Raksha and Varanus once more.

Zaros, seeking to claim a vat of shadow anima that was keeping Raksha in check, found Varanus and spoke to him, informing him of all the events that had transpired during his slumber. Varanus did not care for Zaros' name, simply calling him the "purple deity". He opposed his intention to take the vat, but was powerless against him. The World Guardian arrived shortly afterwards, which allowed Zaros to take the vat, as he was confident that they would keep Raksha in check, much to Varanus' horror. Fortunately, the World Guardian was able to subdue Raksha after a fierce fight.

Varanus thanked the World Guardian for their assistance. He learned from them that they were the only human who could visit him, as the shadow anima engulfing the area would kill anyone else who tried to enter. He did not regret the collapse of dragonkin civilization, simply stating that all that mattered was keeping Raksha subdued. Upon learning from the World Guardian that the device Kerapac used to create the shadow anima was destroyed, he told them that Raksha would fall into a coma, and he would follow suit alongside him due to his link. 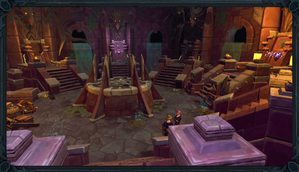 The Crypt of Varanus at Orthen

The Keeper speaks in:

Transcripts The Keeper is the author or co-author of: