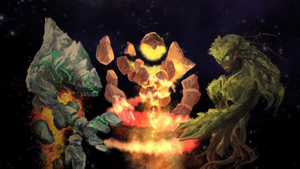 From left to right: Ful, Jas and Bik, creating planets, one of which is Gielinor. Though this image no longer accurately represents their appearance. [1]

The Elder Gods, also known as the The Elder Choir[2] and Creators,[3] are legendary and divine entities responsible for creating the planets and life in the universe. They occupy the highest tier of godhood. There are five of form:[4] Jas, Ful, Wen, Bik, and Mah. Jas is the oldest[5] while Mah is the youngest.[6] According to Zaros, there is also a sixth which he describes as not being of form, but rather "something else".[4]

Currently, the next generation consists of three as yet unhatched Elder Gods;[7] the reincarnations of Ful, Wen and Bik.

Like lesser gods, the Elder Gods may be killed, but this is nearly impossible due to their immense power. They may also die from a lack of anima due to their insufficient experience in creating worlds when they hatch, but this had not occurred until the current cycle.[source needed]

After finishing creating planets, the Elder Gods lay their eggs reside in the Elder Halls of the "perfect" world of that cycle's creation. The eggs gradually absorb anima from the Elder Halls. When the eggs absorb enough anima, they are ready to hatch. However, it is required that the current adult Elder Gods physically touch the eggs to commence the hatching. This touch imparts the adults' identities and memories into the eggs. After hatching, the newly born Elder Gods immediately begin draining the anima from around them, doing so quickly enough to kill all life around them in seconds. It takes only minutes for the entire planet's anima to be completely drained, leaving it a lifeless and barren wasteland. The Great Revision begins - a process in which the Elder Gods drain the anima of the planet they were on and destroy all other planets, retaining the knowledge and ability to create more.[8][9][10]

They were not aware that the creation of the planets also created sentient life, and as such, they believed themselves to be the only living beings.[source needed]

From visions Ariane had, it is suggested that the adult (or possibly the young) form of all Elder God consists of a long, worm or snakelike body ending with a flower-like head. Ful matches this description, as does possibly Jas, whose head is only seen. If Jas has the same body design, the rest of her body was hidden from the World Guardian's view.[11] If an Elder God is born stunted due to insufficient anima, their body deforms into a humanoid. This was seen with Mah.[12]

It can be deduced that the Elder Gods then spend their time and energy trying to create the next perfect world to produce the maximum amount of anima so that their offspring can be nourished. Zaros claims that the Elder Gods could die or be stillborn during the process, which could result in the universe ceasing to exist.[source needed]

In the previous revision, one of these planets housed the dragonkin, who were somehow aware of the existence of the Elder Gods and the Great Revision. An unknown amount of dragonkin fled into the deepest parts of the Abyss to escape the Elder Gods. In this previous cycle, the planet Freneskae was considered to be the perfect world.

Unfortunately, this cycle was also the first in which the Elder Gods faced their own mortality; four of these "eggs" - Jas, Ful, Wen and Bik emerged, but Mah did not. As the Elder Gods needed to work together to create the perfect world, they lost an immense amount of knowledge that Mah should have retained. As the four Elder Gods drained Freneskae of anima within minutes, they were not aware that Mah had survived stillborn.

With one Elder God assumed dead, the remaining four created Elder Artefacts in an attempt to replace the knowledge and power that was lost.[13] Jas sacrificed her egg for the next cycle to create the Stone of Jas, meaning that she gave up her existence at the start of the next cycle.[14] Using the Elder Artefacts, they tirelessly worked to create the perfect world, learning with each creation.[15] This eventually culminated with the creation of Gielinor, and the Elder Gods seemingly vanished after its creation. 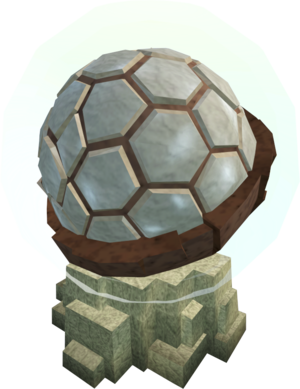 The Stone of Jas.

The Elder Gods briefly woke after sensing that a toxic substance was being fed into Gielinor's animasphere. The dragonkin Kerapac had created a device which could generate shadow anima, harmful to the Elder Gods. This was the first time they saw sentient life other than themselves, referring to them as "mortal". They destroyed Orthen and the other dragonkin settlements. Jas bound the dragonkin to the Catalyst, linking their pain receptors to its usage to drive them to protect it from being used. The Elder Gods soon returned to their slumber.

The Elder Gods still reside on Gielinor, and rest beneath the locations where the elder chronicles are found, next to their mouthpieces.[5] Jas is under the Kharidian Desert, Ful is under Karamja Volcano, Bik is under Entrana, and Wen is under Ice Mountain and White Wolf Mountain. A fifth mouthpiece chamber is found beneath Lumbridge, but is empty. Azzanadra dismisses the possibility that this chamber is for Mah, and speculates it is for something else which he chooses not to reveal.[16]

While the Elder Gods were known to the early human settlers of Gielinor, little knowledge of them has survived to the present day, and outside the Gods, Dragonkin, TokHaar and Mahjarrat, most know nothing of them. The Elder Gods are spoken of by TokHaar-Hok; they are the "masters" that created the TokHaar using the Elder Kiln to create and shape the mountains of the world. TokHaar-Hok explains to the player that their gods are far more powerful than the gods they know of; he views the other gods as corporeal beings who stole his masters' artefacts to gain power, and as such, do not deserve their worship. He also reveals that he, along with the rest of TokHaar, are waiting for their masters to return so they can serve them again.

In addition there is also hidden lore about the Elder Gods from the point of view of the TzHaar. This lore is found in a bookcase next to the Fight Cauldron, and can be translated with the aid of TzHaar-Ga'al-Kot.

With the death of Guthix, the gods returned to Gielinor. It is unknown if the Elder Gods were affected by Guthix's edicts, seeing that they surpassed him in power. The Elder Gods slowly began to wake during the Sixth Age, when Xenia attempted to dump Gielinor's anima into the Abyss to prevent them from waking. The World Guardian encountered a prehistoric abyssal that informed them that dumping of the planet's anima had caused them to slowly wake up.

The Mahjarrat Sliske was soon able to make contact with Jas through unknown means. The Elder Gods saw many mortal lifeforms; curious, Jas appointed Sliske as her agent, requesting that he bring the lesser gods to her with the Catalyst.

Sometime after the 18th Ritual of Rejuvenation, the Mahjarrat on Gielinor soon noticed that their powers were draining at an alarming rate, despite having undergone the ritual a few years ago. An emergency meeting was held, where Zaros appeared and requested they head to Freneskae to be permanently empowered. Zamorak appeared after Zaros left and tried to convince his brethren not to go, believing it to be a trap, but his words fell on deaf ears. It is revealed during the quest that Mah's awakening since the World Guardian's last visit to the planet compelled her to recall all of her divine energy. Zaros and the rest of the Mahjarrat reversed the ritual to draw from Mah. Seren, who had also arrived to the planet, tasked the adventurer with quelling Mah's nightmares, only to learn from them that "someone close to her" willed a streak of corruption that caused Mah to be stillborn. Seren proceeded to mercy kill Mah to end her suffering, making her the first Elder God to be killed.

Sliske brought the lesser gods and a few other participants to his Endgame, where a massive labyrinth was constructed. Jas' innate powers slowly stripped all of the gods of their divinity. At the end of the game, Kerapac appeared and destroyed the Catalyst with the Mirror. An enraged Sliske then decided to kill the World Guardian for good, but he was eventually slain by their hands, but not before transferring some of his essence to them. The World Guardian soon arrived at a massive chamber with Zaros and Seren, where they were speaking to Jas. Zaros requested that they make him an Elder God with the death of Mah, showing her core as proof of her demise, but Jas refused his request, stating that he had to make life from nothing. Zaros and Seren soon left the chamber, upon which Jas took notice of the World Guardian.

Jas believed mortal life to be unexpected and dangerous after hearing a variety of responses from them, but she found herself particularly interested in them and proposed an experiment. She told the World Guardian that if they could prove to her and her sisters that mortal life deserved to exist, they would leave the current cycle alone. She was not particularly helpful in explaining how, simply stating that it would need to be proven with actions.

Despite being free of the curse, Kerapac still desired revenge against the Elder Gods for the pain that they had put his kind through. After obtaining the Needle with the World Guardian and Charos' help during Desperate Times, Kerapac flew to Orthen to begin the final steps in his plan. With his device, he created a barrier of shadow anima that would protect him from the Elder Gods. The World Guardian, seeking to stop Kerapac, met with Jas after she granted them an audience, who revealed that they were aware of his attempt to kill them. Although they could intervene, they chose not to for the World Guardian's benefit for the time being, but would do so should they fail to act in time. Jas gave the World Guardian a device that would allow her to regain control of the Needle from Kerapac before she teleported them away.

The World Guardian infiltrated Kerapac's laboratory on Orthen and killed the black stone dragon inside. This dissipated the barrier of shadow anima around the laboratory. Kerapac refused to listen to reason, forcing the World Guardian to use the Eye of Jas. Jas immediately reclaimed the Needle and bound Kerapac and his sleeping Nodon to her. Ful was particularly unhappy with Kerapac's assassination attempt and emerged from the Anachronia volcano, destroying it and the laboratory. With the situation under control, the Elder Gods returned to their observing state.

Kerapac's tampering of the anima caused the eggs to shake slightly, with Seren realizing that a second, more powerful tampering would cause them to emerge prematurely. She also sensed her three "cousins" - the Elder Gods of the upcoming cycle.

The three eggs were later discovered by the World Guardian, Azzanadra and Ariane underneath the Heart of Gielinor in relatively good condition. Azzanadra warned them to not destroy an elder artefact or kill a god in the halls, lest the eggs begin moving once more. It is unknown what Zaros plans to do with the eggs.