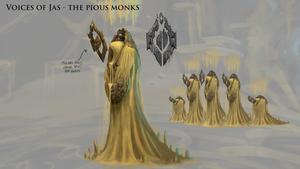 Concept art for the Voice of Jas. 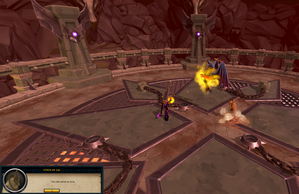 Jas binding Kerapac whilst speaking through the Voices of Jas.

The Voice of Jas is a temporary construct of stone and sand, created by the Elder God Jas in order to communicate with the player and their cohorts during Sliske's Endgame and Desperate Measures. At the moment of its creation, it speaks a single word or short phrase before dissolving into the sand below. Jas summons several of these constructs while conversing with the player because if she would speak with her own voice, the player, Zaros, and Seren would be obliterated by the force of her voice.

This information has been compiled as part of the update history project. Some updates may not be included - see here for how to help out!
Retrieved from ‘https://runescape.wiki/w/Voice_of_Jas?oldid=35819439’
Categories:
Hidden categories: