From the RuneScape Wiki, the wiki for all things RuneScape
Jump to navigation Jump to search
This article is about the area. For the outfit unlocked from rune dragons, see Kethsi outfit.
For the music track, see Kethsi (music track).
A map of the accessible areas of Kethsi. 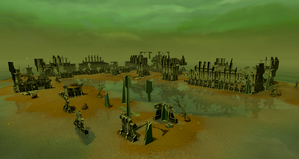 The Isle of Sann on Kethsi.

Kethsi is a planet near the aviansie homeworld of Abbinah,[1] and which once housed a prosperous civilisation which was destroyed by the dragonkin, wiping out the Kethsian civilisation and killing all inhabitants. Kethsi remains dead and ruined to this day, and ash still falls from the sky.

There are 2 parts of Kethsi available to the players:

Kethsi features heavily in the quest Ritual of the Mahjarrat as the history of the Stone of Jas and the dragonkin are revealed by exploring Kethsi during the quest. The only parts of Kethsi which are currently accessible are the Isle of Sann and Mount Firewake.

Kethsi was a large, advanced civilisation of an unknown age which was mainly inhabited by a Mage Conclave. Late in the summer of the Year of the Babbootang, the Stone of Jas was brought to Kethsi by Elder Mage Etheron after a six-year expedition. The inhabitants of the plane relocated the Stone to the Mage Conclave on Mount Firewake.

The act of bringing the Stone of Jas to the Kethsian plane through the World Gate brought great prosperity to all Kethsians. The inhabitants were able to tap into the power of the Stone in order to work various spells which improved the living conditions of Kethsians and helped repel any enemies. However, prolonged use of the Stone of Jas provoked and empowered the dragonkin, leading to the invasion of Kethsi from the east by dragonkin.

The efforts of the Kethsians were futile, and soon the headquarters of the Conclave were destroyed. A small remainder of the surviving Kethsians retreated to the Isle of Sann in the hopes of escaping the dragonkin.

In a final effort to stop the dragonkin, attempts were made to create a weapon using bane ore. Weapons made from bane ore may be magically "tuned" to be harmful to certain creatures. Smelting the ore and using the bars on Kethsian anvils located on the Isle creates bane bolts and arrows, proven to be able to take down dragonkin. However, the supplies needed to mass produce such weapons were not available, and it is assumed that the dragonkin were eventually able to destroy Kethsi, resulting in its present condition.

The events leading up to the attack on Kethsi and the attack itself are chronicled by Dathana in a message left behind on the Isle of Sann.

A mural in Kethsi depicting an attack by Dragonkin

The only entrance or exit to Kethsi is a fairy ring located to the very south-east corner of the area. Just north of it, there are some ruins, with a wall in the middle with a mural on it. It shows dragonkin, as seen by the legs and feet, destroying a city. It is unknown whether this has been drawn on the wall before or after Kethsi was destroyed, which makes it impossible to know whether the mural is about the Isle of Sann or another city.

On the opposite side of the mural is some rubble, and upon searching it a Tetrahedron 4 can be found and is used to gain the coordinates to find a key used in Ritual of the Mahjarrat.

On the first floor to the north, a wall design can be seen. When investigated, it shows four different columns which do not seem to fit together without intermediate pieces. One of the symbols on the columns look like an upside-down Dorgeshuun goblin insignia. There is a statue next to the wall design, which when examined says "It doesn't look like it's meant to be human."

At the southernmost part of the first floor there is a ledge which can be jumped across. This has a hard skill requirement of level 77 Agility that cannot be boosted, and will reward 2 experience in Agility. To the other side of the ledge is another statue, similar to the one at the first side of the ledge, but with its left arm missing. A little to the north, there is a wooden plank which seems to partially cut through at height of the first floor's ground. During the quest Ritual of the Mahjarrat, this plank is knocked down to gain access across the gap to the anvil to the north.

To the north of this separated area, behind the plank, is a small platform with a "Kethsian anvil", with the examine "I may be able to make Kethsian items on it.". This anvil is used after the Ritual of the Mahjarrat to fashion items made from bane ore.

You will appear at the last part of Kethsi. You can climb down the stairs or walk the nearby plank to obtain the second tetrahedron. 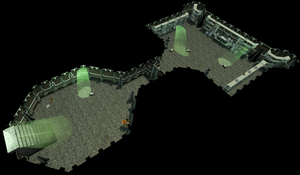 A view of both of the underground rooms on Kethsi; the stairs and the library.

To the west of the rope swing there is another anvil looking identical to the Unusual anvil on the first floor of the main hall. A fairly long distance to the west is another building of two floors high, with two ladders in it. There are parts of a ledge and hand grips at this building. South of this building is another which is also two floors high. South of this is a staircase which goes underground, and south of that is a ledge leading to a small island which is empty other than some ruins, a tree and another searchable rubble containing the second tetrahedron.

Mount Firewake is a great volcano on Kethsi, and was the resting place of the Stone of Jas while it was on that world. Following Kethsi's destruction, the Dragonkin Forcae made his way to this place, and built a laboratory there, creating the rune dragons with his experiments. Players can visit Mount Firewake using the World Gate following completion of Fate of the Gods and Ritual of the Mahjarrat to battle rune dragons.

On 14 June 2011, Kethsi was added as a fairy ring location via a hidden update. This allowed players to access the Isle of Sann by inputting the code: DIR, followed by AKS. Players could search a nearby pile of rubble in order to acquire the tetrahedron 4, which at this time did not yet have a use.

A few months later, on 14 September 2011, the Grandmaster quest Ritual of the Mahjarrat was released. This included a segment in which the player travelled to Kethsi, and made use of the tetrahedron. The release of the quest also allowed the player to explore more of the Isle of Sann. 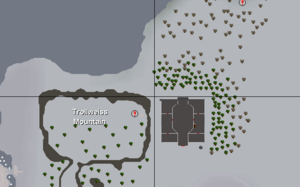 A map of the coordinates shown in the postbag

On 7 October 2010, the 44th Postbag from the Hedge was released, including hints for Herblore Habitat and Do No Evil. However, the journal included a final hint which read:

Origins lie in ruined Kethsi, but now they return from the stone prison to lay waste .?[sic] The strong remembers, the weak falls.

The year provided in the journal shares the same format as coordinates used in Gielinor. When treated as a coordinate, "2212N1145E" leads to a point just west of Zemouregal's fort which is located just adjacent to the Wilderness. "The strong" in the post, a singular noun, is a reference to Robert the Strong, a hero from the Fourth Age who fought against the dragonkin. Robert succeeds in imprisoning the dragonkin, but it is revealed in a note that he leaves behind in Kethsi that he was aware of his impending reincarnation as Bob the Jagex Cat. Additionally, in the epilogue of While Guthix Sleeps, the dragonkin reveal that their anger is escalating due to the increased use of the Stone of Jas, heightening their desire to lay waste to the world.