From the RuneScape Wiki, the wiki for all things RuneScape
Jump to navigation Jump to search
StrisathStrisath (Syrtes fledgling)? (edit)? (edit) 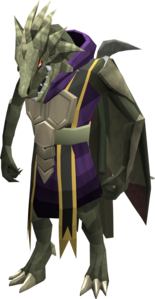 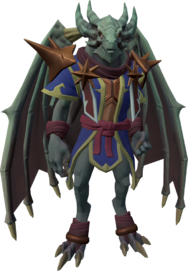 Strisath is a Necrosyrte dragonkin and former philosopher who plays a role in the quests While Guthix Sleeps, Ritual of the Mahjarrat, Missing, Presumed Death, One of a Kind, Hero's Welcome and Desperate Measures. He claims to be the leader during Hero's Welcome, although Sithaph is shown taking the lead in While Guthix Sleeps and Ritual of the Mahjarrat, and Sakirth is referred to as 'Syrtes Elder' in Desperate Measures.

Strisath escaped the Great Revision by hiding in the Abyss alongside his fellow dragonkin. He was a member of the Syrtes and was Sakirth's subordinate on the Kindra council. According to Kerapac, he was able to infer meaning from chaos and decipher patterns from complexity. This talent was lost when Strisath was driven completely mad by the curse of Jas. 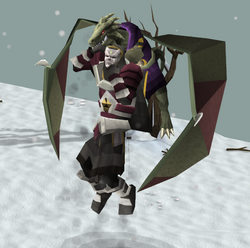 Strisath lifts Lucien, who then smashes him down.

Strisath initially appears in a cutscene during While Guthix Sleeps where his body is seen to be glowing in a manner just like the player's during the quest after making contact with the stone. He and his fellow dragonkin Sakirth and Sithaph talk of bringing pain to the mortal races of Gielinor.

Following the rejuvenation ritual, Lucien summons the Stone of Jas. The dragonkin make their way to the ritual plateau where they proceed to attack the false user of the stone. Strisath is thrown to the ground as he attempts to lift Lucien skyward, before Lucien is stabbed by Sakirth.

Capture by Sliske and theft of the Staff[edit | edit source] 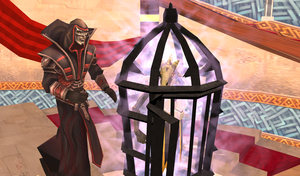 After the ritual, the devious Mahjarrat Sliske lured Strisath - who was guarding the Staff of Armadyl at the time - into the Shadow Realm so he could trap him and steal the staff while he was gone. To Sliske's delight, Strisath actually brought the staff with him, and he was easily able to take the powerful weapon for himself. Sliske then trapped Strisath in a cage surrounded by shadows, and used the staff to kill Guthix. Sliske also claimed he used the staff to reveal the dragonkin's connection to the Stone of Jas, allowing him to locate and retrieve it.[1]

Strisath, angered at the False User.

Sliske later gathered all the gods together within the Empyrean Citadel of Armadyl, before proceeding to mock them all and revealing the Grim Reaper and Strisath, both locked in cages. He used to the threat of killing Death and thereby trapping the Gods' follower's souls in their bodies to control some gods. To others, he threatened to release Strisath. Declaring that the Stone of Jas would be awarded to anyone who killed the most gods in his upcoming gladiatorial games, he was frustrated with the lack of action upon his announcement. To kick things off, he released Strisath from his cage. Strisath, empowered by the recent use of the stone, began to attack the player, who had previously touched the stone, which caused the gathered gods to flee, one by one. After Icthlarin fended off Strisath, the adventurer managed to free Death before the trio teleported to safety.

Following the quest, the Statue of Death remarks that the citadel took some cleaning up as "he really lost his temper" before his rage ran its course. 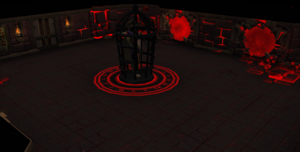 Sometime before after cooling down, Strisath was by a fellow dragonkin named Kerapac. Kerapac took him to his Daemonheim laboratory for study in an attempt to help cure his madness, storing him in a cage-like magical construct. The World Guardian resent at the Ritual and Sliske's Ascendancy travelled inside the construct to defeat a physical manifestation of Jas' curse, the Echo of Jas. After the Echo was defeated, Kerapac reported that Strisath's rage subsided - albeit temporarily.

Even though his rage had returned, Strisath appeared to control himself slightly better and witnessed the use of the Elder Mirror to kill V with Sakirth and Kalibath. Upon returning to their lair in the Ancient Cavern, Strisath stopped an argument between Sakirth and Tarshak, their prisoner. He chastised Sakirth for his anger, believing that he was going power-mad from having killed two False Users - Lucien and now V. He then ordered Kabilath to restrain Tarshak, who protested their decision. Strisath stated that it was justified for the Dactyl having vivisected many of his fellow creed members, before Tarshak resisted and attacked the three of them.

Strisath was horrified to see Tarshak mutating, wondering if it was an effect of the curse or a disease - rather, this was caused by the Elder Mirror. Tarshak then fled the scene, upon which Strisath ordered Sakirth to put the Elder Mirror back in the Vault. He stated that he would try to contact more of his creed to inform them of this revelation before leaving to recover.

He later accompanied Sakirth and Kalibath following Tarshak's death, confronting Kerapac's group in Brimhaven Dungeon. He called Tarshak's transformation a "necessary evil" and that they now had a way to kill the False Users, before taking note of the World Guardian's presence and why they were with them. The two dragonkin factions then got into a scuffle while the World Guardian escape, which they all survived.

He is later freed of the Curse when Kerapac destroys the Stone of Jas, but his current whereabouts are unknown.

Transcripts Strisath is the author or co-author of: