From the RuneScape Wiki, the wiki for all things RuneScape
Jump to navigation Jump to search
SakirthSakirth (Syrtes elder)? (edit)? (edit) 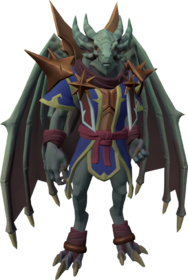 Sakirth is a Necrosyrtes Dragonkin who first appears in the final cutscene after completing the quest While Guthix Sleeps and is seen wearing a turquoise robe. Sakirth is referred to as the 'Syrtes Elder' in Desperate Measures, this is despite Sithaph appearing to lead the Necrosyrtes in While Guthix Sleeps and Ritual of the Mahjarrat, and Strisath referring to himself as leader during Hero's Welcome - though Sithaph was not present.

Sakrith was one of the Dragonkin who survived the Great Revision by hiding in the Abyss, before arriving on Gielinor. He was the leader of the Syrtes (the predecessor to the Necrosyrtes), and proposed to find Jas, believing that if they were shown respect, they would likewise return it. Unfortunately, this proposal never came to pass, as Kerapac activated his shadow anima device, enraging Jas, who bound the Dragonkin to the Stone.

Sakrith soon became crazed by the urge to destroy the False Users. He likely participated in Kethsi's destruction and the Dragonkin Conflicts in the Fourth Age before going into hiding. 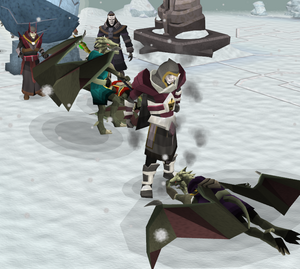 Sakirth hits Lucien with the Staff, killing him.

Sakrith is seen with two of his fellow Necrosyrtes, Strisath and Sithaph when they note the theft of the Stone by the Mahjarrat Lucien, expressing a desire to destroy.

He attacked Mos Le'Harmless with his fellow kin. At the climax of the 18th Ritual of Rejuvenation, Sakrith accompanies the two, but secretly hides while the other two confront Lucien over his misuse of the Stone. When Lucien knocks Strisath to the ground, Sakrith appears behind Lucien, picks up the Staff of Armadyl and bashes Lucien from behind, breaking the staff. With Lucien on the ground, Sakrith then proceeds to impale the broken staff on Lucien, killing the False User. 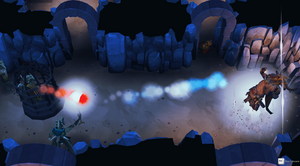 Sakirth uses the Mirror to channel V's energy into Tarshak, a captured Dactyl Dragonkin, which kills V in the process and mutates Tarshak. Upon returning to their lair, Sakrith starts arguing with Tarshak. Strisath orders the two to stop and tries to have Tarshak contained, but Tarshak refuses to go along quietly. Seeing this, Sakrith attempts to attack Tarshak, only to be wounded back by him. The trio of Necrosyrtes then attack Dactyl, only to be horrified when he mutates even further due to taking V's anima. When Tarshak leaves, Strisath orders Sakrith to return the Mirror back to their vault, before he leaves to recover, while Kabilith goes on to interrogate a prisoner. The World Guardian confronts Sakrith, who launches a fireball at them, but due to his wounds from Tarshak, the attack does not kill them. Sakrith reluctantly answers their questions in the hopes that they would leave sooner.

After mutated Tarshak is killed by the World Guardian, Sakrith arrives with Strisath and Kabilath, calling the Dactyls useless for breeding monsters. Kerapac called him stupid for creating an abomination, when he defended by stating that he had killed a False User, demanding that the Dactyl fall in line to use this power against them. Kerapac stated that the endeavour would kill them all. Sakrith and his allies get in a scuffle with the Dactyl, which they all survive.

He is later freed of the Curse when Kerapac destroys the Stone of Jas, but his current whereabouts are unknown.

Transcripts Sakirth is the author or co-author of: