From the RuneScape Wiki, the wiki for all things RuneScape
Jump to navigation Jump to search
The Old School RuneScape Wiki also has an article on: osrsw:Forcae

Forcae was one of the Dactyl dragonkin and worked with Kerapac in an unknown laboratory. The two worked together and created the first bronze dragon in history, although Kerapac viewed it as a failure due to its lack of intelligence. However, they continued to work together to create a stronger dragon, which resulted in the creation of the first iron dragon, which killed the bronze dragon easily.

Forcae wanted the dragons they created to have more metallic dragon characteristics, although Kerapac disagreed, stating that they were "inferior" to the Dragonkin. However, Forcae managed to convince him to create a new foundry. They began to argue a bit, with Forcae wanting to work on metallic dragons, while Kerapac began working on dragons with elemental properties, such as frost dragons and white dragons. Forcae needed a stronger material and realised that there was mithril available, so he decided to begin creating mithril dragons. 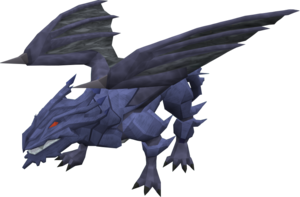 A mithril dragon, one of Forcae's first creations

Forcae's mithril dragon was stronger than Kerapac's white dragon, and he realised that something could be done with it. However, Kerapac still refused to believe that the metallic dragons could offer a solution, and in anger, Forcae left him and began to work by himself. This completely destroyed their relationship, with Vicendithas stating that just mentioning his name was enough to enrage Kerapac to the point where he wouldn't suspect others of anything on that matter.

As a result, he now had the Brimhaven laboratory to himself and decided to create adamant dragons, since it was a stronger metal than mithril. He took a black dragon egg and infused it with adamantite, although it died when he tried to infuse more adamant into it. Forcae realised his mistake quickly, finding out that he should have superheated the egg first and then cooled it with pure water, and he took eggs from Kerapac's frost dragon experiment to sustain himself. He named his first successful adamant dragon after his daughter, Lasthes. He then heard about a stronger material and decided to go after it to create an even stronger dragon.

However, his success was not long-lasting as the Necrosyrtes eventually found his lab. During their attack, he managed to repel one of them, although his dragon died doing so. Knowing that there would be more Necrosyrtes coming for the lab, he destroyed all of the evidence relating to the dragons but left the adamant dragons behind. He decided to head for Kethsi as the Necrosyrtes had already destroyed the planet and would most likely not come back to it. 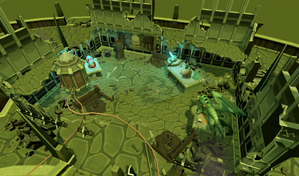 Forcae eventually ended up in Mount Firewake and found a crude laboratory that the Kethsians had left behind. He created a forge and began to harvest all of the rune ore he could find and began creating rune dragons. However, the dragons disappointed him greatly as he noted that the metal slipped from their scales and he released them, although they circled the ruins surrounding the mountain.

However, the failed dragons eventually left the mountain, leaving Forcae with peace and quiet. He then decided to make another rune dragon egg, but this time, he added his own blood to it, hoping that this would make the dragon even stronger than his previous experiments and, most importantly, that the shared blood would create a connection between the dragon and himself. The experiment seemed to succeed, as the metal was bonding better with the egg, but he was still unsure if it would survive. Fortunately, the egg eventually hatched and the rune dragon impressed Forcae, who considered it to be a beautiful creation. Moreover, the failed rune dragons returned to the mountain, attracted to his newest creation. His latest creation, better armoured than its predecessors, killed the failed creations easily, much to Forcae's delight. Forcae then planned to use this dragon to take revenge on Robert the Strong for stealing from him.

Due to the armoured rune dragon's success, Forcae began imbuing more rune dragon eggs with his blood, but this began to weaken him. As a result, he was no longer able to focus on his work and noted that the successful dragons were noticing that he was getting weaker. He noted how the armour plating made the dragons impervious to magical and mundane attacks, although he suspected that the material used by the Kethsians against the Dragonkin probably could bypass that armour. He dismissed the danger of the material, however, as the material on Kethsi had since long been exhausted.

The first batch of eggs hatched later, but Forcae was still unsatisfied. Realising the potential metal dragons had, he decided to try to create an even stronger dragon, made of orikalkum. He was reluctant to start the experiments immediately, as he had run out of dragon eggs to experiment on, which meant he had to return to Gielinor, where the necrosyrtes were still hunting. He didn't have any orikalkum either and realised he had to return to the Dragonkins' homeworld, the only place he would find a pure vein of orikalkum. He planned to manipulate the energy of the nearby World Gate to return to his homeworld, but then noticed that the rune dragons were becoming restless and agitated. He resolved to discipline them so they learn to respect him, commenting in his journal that he was their god after all.

Years later, the World Gate was found and activated again on Gielinor, and adventurers used the portal to go to Kethsi, reaching Mount Firewake where the rune dragons are still roaming. Forcae's ruined laboratory and unknown charred remains can also be found there, suggesting that he had tried to punish the dragons for their disobedience, but had failed and was killed by his own creations.

Transcripts Forcae is the author or co-author of: