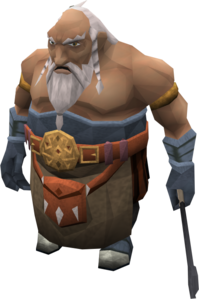 Doric is a dwarven master smith and warrior who lives in his hut north of the Falador lodestone with his son Boric. He is a veteran of the Kinshra-Faladian War of 164 and the subsequent Misthalin–Morytania War.

He runs a metalwork business out of his hut, supplying customers with various weapons. His hut contains an anvil, a furnace and a whetstone on the ground floor[UK]1st floor[US], and an underground area with another furnace and anvils which must be excavated first.

Doric is the quest NPC for the What's Mine is Yours and Devious Minds quests. He also plays a key part in the novel Betrayal at Falador.[1]

He is the self-proclaimed best maker of pickaxes in Gielinor, but he has a running order with Nurmof and will not sell any.[source needed] He maintains a small wheat garden north of his hut. Occasionally, the Puro-Puro portal will open there, resulting in a crop circle.

Like most dwarves, Doric is hardy and often keeps to himself, but he is loyal and sympathetic to those whom he considers his friends without limit. He is clever and his experience and age allow him to keep calm in dire or emotional situations. Doric is also brave, having faced an adult werewolf in combat on multiple occasions despite the probability of losing.

In spite of the burden, he raised his son Boric entirely by himself and was eager to send him to Keldagrim to learn to become a smith, thinking the dwarves there would be able to teach him more than he himself could. He later regretted not having offered him a choice when Boric returned home years later, but was glad that he had turned out well and decided to rename his business "Doric & Son".

Doric maintained a friendly relationship with the various farmers and lumberjacks that lived in the farms around him, although he did not have much contact with them. After an angry and drunken mob of them burnt down and pillaged his cabin with a dozen H.A.M. members, he was angry with the source of their fear rather than the men themselves. Likewise, when he found out the monster had entered Falador upon seeing the gem that was stolen from him in a gem shop in the city, he was only concerned with warning the citizens rather than getting his property back, disproving the avarice commonly ascribed to dwarves.

He is also an honourable dwarf, as evidenced by his risking his life for Kara-Meir by returning to the Monastery with Theodore and Castimir to rescue her and Gar'rth, since he owed his own life to her due to her actions in the Dagger Alley house. When they first met, she addressed him in Ancient Dwarvish, to which he bowed before her with genuine respect.

Apart from being a master smith with extensive knowledge of minerals, gems and engineering, Doric is very skilled in combat, having been able to knock out one of Jerrod's teeth in a skirmish with him, and felled several Kinshra soldiers at the Battle of the Monastery with his axes, thrown with astounding accuracy.

Doric's early history and exact age remain unknown. He is known to be more than 106 years old, meaning that he was born some time before 64 of the Fifth Age.[1] Doric was born in the dwarven capital city of Keldagrim some time before humans knew of its existence. Like most dwarves, he was raised a follower of Guthix, although the religion was not actively practiced.

Doric trained to become exceptionally skilled in hand-to-hand combat, his preferred weapon being a battleaxe, although he would use smaller throwing axes as well. In the mines, Doric is known to have fought a number of dangerous foes, which would later harden his nerves and improve his effectiveness in combat.[source needed] At some point, he had a son named Boric, whom he raised by himself after his wife left them while Boric was still young. 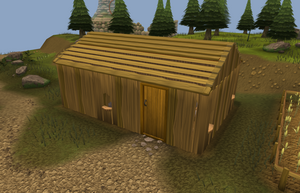 In approximately 140, Doric left Keldagrim for unknown reasons, opting to take up permanent residence in the wooded region north of Falador, on the fringe of Asgarnia.[source needed] Although this placed him near the Ice Mountain Dwarven Colony and the Dwarven Mine, Doric usually avoided contact with his nearby kinsmen. Doric constructed a log cabin south of the Goblin Village, and became largely self-sufficient. To keep himself supplied, Doric raised a number of mountain goats, although he was occasionally forced to trade with nearby settlements and farmers.

By all accounts, Doric was fairly friendly with most of his neighbours, and maintained healthy relationships with most of them. Kinshra raids, such as those led by Commander Sulla in 155, tended to focus on more easterly settlements, and the threat of the Kinshra was never cause for extreme worry on Doric's part. As the years progressed, however, small settlements and farms tended to move further west, crowding Doric and causing him to become slightly more hostile to some of his neighbours. Although most were willing to tolerate this change, a handful did bear Doric some resentment.

Believing that the smiths of Keldagdrim could teach more than he knew, Doric soon sent Boric to the city to get an education. He was unaware that Boric took this the wrong way. 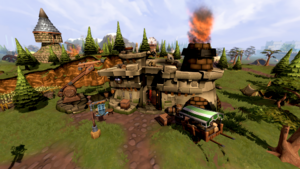 In 164, when humans were being attacked by the werewolf Jerrod, a group of men suspected Doric and robbed his house of gems and livestock and burned his hut down. The White Knight Squire Theodore found Doric getting his secret stash of adamantite bars from the ruins of his hut. Doric accompanied Theodore to get justice from the Falador White Knights. There, Doric identified Kara-Meir's sword as one made of adamant. While staying in Falador, he found one of his stolen gems being sold on the market and tried to take it back, but stopped after the guard threatened to arrest him. Following the Siege of Falador, Doric successfully petitioned for the return of his stolen property which once again made him rich. Ebenezer also offered to make him one of his heirs, but Doric refused, given how he was older than Ebenezer and already had a fortune.

During Midsummers Eve, he travelled with Ebenezer to Varrock to meet up with Theodore, but had to wait for him to return from an outing. After Gar'rth was arrested and forced to lead an embassy to Morytania, Doric volunteered to go alongside Theodore, Castimir, Kara-Meir, Arisha, Gideon Gleeman, and Albertus Black, who replaced the comatose Ebenezer. Prior to leaving for Paterdomus, Doric spoke with Horvik and turned his adamant bars into adamant arrows and obtained a wolfbane dagger. He arrived in Canifis and took a room at the Hair of the Dog, preferring to stay there with Albertus and Gideon while the others went exploring. After the Myreque attacked the town he fled with them, and overcame Imre in single battle claiming he wanted a wolfskin rug while Imre wanted to eat dwarf meat. In exchange for his life, Doric made Imre promise to help them if need be. He joined the Myreque at Hope Rock and joined them on the hot air balloon Hope Soars, grumbling about being in the air. After the balloon was downed he joined the survivors in running for the river, calling upon Imre to mislead the werewolves hunting them. He managed to make it back across the river with the straggling remains of the Myreque.

The following takes place during What's Mine is Yours.

In year 169 of the Fifth Age, Doric's business began to fail miserably, with both loyal and new customers abandoning him after a few orders. He only had one loyal customer remaining by this time; Sir Amik Varze of the White Knights. He had also been informed that Boric had finished his studies in Keldagrim, but did not return home, which caused him much worry as he could not work thinking about his son.

A passing human adventurer entered his business and Doric explained the situation he was in. An order had just come in from Sir Amik, so the adventurer suggested to make his best weapons to increase his profile. Doric sent the adventurer to obtain some high quality copper and tin ores from four specific mining spots across Misthalin.

While obtaining the ore, the adventurer spotted a cloaked figure and Dark Wizard Elijah animating the ore, causing living rock brawlers, slaying each one to obtain the ore. They also found the wizard's diary and a strange amulet which Doric recognised as a Gofannon amulet. Doric learned that someone was targeting him, but was unsure of who as he was not on bad terms with any of his customers. Once the two weapons were made, Doric sent the adventurer to the Artisans' Workshop to fine-tune the weapons. During this time, the adventurer learned that Boric was trying to sabotage his father's business, and brought him to Doric.

Doric was shocked to learn that Boric was sabotaging his business and driving away his customers. With the adventurer's help, the two were able to come to terms with each other. They then decided to rename the business as "Doric & Son", revitalizing the business after having the adventurer provide more space for them. The misunderstanding was soon dealt with and the business grew significantly, with both new and old customers looking for his services.

He was summoned to Seren's council as part of the Desperate Times teaser on 11 May 2019. Unsure as to why it was him who was summoned, he claims that "all the other dwarves were too busy".[2] In order to deal with the threat to all life by the Elder Gods, Seren proposes the creation of a great garden that may appease Bik. When asked about what lands, workforce or seeds can the dwarves spare, he responds that dwarves cannot help with any of these, and has no advice to give to the World Guardian on these matters.[3]

Doric may occasionally appear at the Anachronia Dinosaur Farm on Anachronia. He may be sold scimitops in exchange for beans. As a large-sized animal buyer, he will appear or renew his order for scimitops every three days and purchase up to 6 animals before leaving, unless the player is at least 'Senior Master Farmer' rank in the farming reputation system; then he will buy up to 12.

After the quest What's Mine is Yours has been completed, the player may complete a number of members only tasks for Doric.