From the RuneScape Wiki, the wiki for all things RuneScape
Jump to navigation Jump to search
Zarador? (edit) 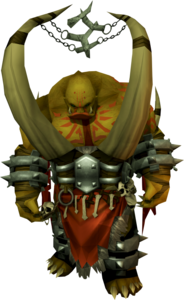 Zarador, previously the Bandosian chief engineer, is a hulking ourg and was the right-hand man for Bandos during the war between Armadyl and Bandos. He acts as the general of Bandos' army, and directs troops and soldiers to battle. He is one of the four known ourgs in RuneScape, the others being General Graardor, Blorgak and Yoykrad.

One of the few ourgs in existence, Zarador lived with an unknown group of ourg shamans who were tired of the Gielinorian God Wars, retreating to a hidden vale. Dispirited and broken, they believed it more important to keep Bandosian lore alive than die gloriously in battle. Zarador was the last generation of the newly born ourgs, and when the elders passed, he decided to leave the vale and explore the world, living with the other races and learning how to become an engineer and warrior; his upbringing with his tribe allowed him to speak fluently. Zarador did not like his tribe for not dying gloriously in battle, but knew that if it were not for their cowardice, he would have never accompanied Bandos.

In one of these battles, Zarador and his village were outnumbered by a massive goblin force. He placed several cannons which were pointed at the village. The goblins, believing that they had a death wish, laughed and tried to use the cannons on them, only for Zarador to command the spirits within to explode the cannonballs, wiping out half of the attacking force and killing the rest in the confusion. Bandos personally congratulated him for his cunning.

While fighting, Zarador realised that he would eventually slip and be bested by another opponent, hence why he became an engineer, some of these constructions getting Bandos's approval.

During the second World Event, Bandos had Zarador construct his divine weapon, the Scarecrow, to kill his rival Armadyl. Bandosian convoys were sent to harvest divine energy, and strike forces to intercept Armadylean convoys. Despite the efforts of the Bandosians and numerous human recruits who joined his cause, Bandos's arrogance cost him his life, as Armadyl harvested more energy than him and launched a strike that decapitated the war god. Zarador was able to survive the collapse of the Scarecrow and regrouped with his fellow Bandosians, blaming his loss on Zanik and the Dorgeshuun as they had resisted his attempts to subjugate them during the Fifth Age, which took away a significant portion of his power.

During the battle, Bandos appeared to be much more different, and told Zarador that he wanted to create the perfect warrior race who would worship him, that being the ourgs. He revealed that he pondered what he had done to the inhabitants of Yu'biusk, and the doom of his own people. Zarador assured him that they were proud and joyous to serve him once again.

Zarador and the rest of the Bandosians also purged their ranks of the humans that had joined them in the conflict, believing them to have been useless.

Following Bandos's death, Zarador and the other Bandosians made their way to the Lumbridge Swamp Caves in an attempt to reach Dorgesh-Kaan and obtain revenge. The Dorgeshuun had sensed their arrival and collapsed several tunnels to cut them off. Ur-Tag and Zanik pleaded with the World Guardian to meet with the group, as they would most likely listen to them.

The World Guardian noted that the group was leaderless, stating that Graardor didn't deserve to be leading the operation as Zarador was Bandos's second-in-command during the fight against Armadyl. The other leaders began arguing over who was the rightful leader of the Bandosians. Zarador knew what the World Guardian was attempting, but was silenced by Graardor. When they suggested a tournament to decide the new leader, General Wartface remembered the Kyzaj. Zarador tried to dissuade the others from hosting one, but he was threatened by Graardor, who took the comment as an insult to his strength. With no other choice, he reluctantly agreed, and pointed out that Bandos had always allowed other races to participate, suggesting the Dorgeshuun be allowed in as they were culturally different compared to the other goblin tribes. He suggested taking Zanik as their champion, but the World Guardian was able to sense his intentions and stated that they would fight in her name.

Zarador tried to stop the World Guardian from intervening, but Bork soon chimed in and remembered that the champion could be served by a trained attack beast, forcing Zarador to accept them into the tournament, and told them to head to Bandos's remains as a portal to Yu'biusk had opened there following his death. Zarador informed them of how the tournament would work, and that some of their fans had arrived at their camp.

When the World Guardian arrived at their camp, a goblin messenger arrived to inform them that they would be fighting Yelps in the first round. However, the group noted that this goblin was unusually off, and found him to be a human in disguise and disposed of him. The World Guardian found a note that implicated more members on Yu'biusk and informed Zarador of this, who forced them to clear the area of the infiltrators before resuming the tournament.

In the first round, Zarador informed them that they could bring as much bodyguards as they wanted, much to the World Guardian's frustration as they had none. Despite this, they were able to defeat Yelps. In the second round, he informed them that they could not use any armour, much to their frustration a second time as trolls had rock-hard skin, but were able to defeat Lol. Zarador, like the other Bandosians, believed the World Guardian would fail, but was proven wrong by their strength. He admitted to them that it was good to see all of Bandos's people assembled together, and for the final round, gave them the Kyzaj, which they would have to use against Graardor. Despite having only learned of the weapon just now, they were able to defeat Graardor with Zanik's help on the weapon.

Following the final round, Zarador soon revealed that they had captured Zanik and ordered the World Guardian to slay her. Though this would mean the Dorgeshuun would be disqualified, Graardor would be content with her death and cancel his invasion. The World Guardian had the option to kill or spare her. If they killed her, both Zarador and Graardor were pleased, making Graardor the leader of the Bandosians, but proclaimed to all present to acknowledge the World Guardian's strength. If spared, he was initially disgusted, but after her speech, he realized that she was the Chosen Commander after all, and what she said made a lot of sense to him.

When the tournament ended, Zarador and most of those assembled returned to Gielinor, although he would occasionally visit Yu'biusk from time to time. He did not remain with Zanik, as though he commended her intentions to make Yu'biusk hospitable, there needed to be someone to remember Bandos and his ways, which only he could fulfil.

The following takes place during Desperate Times and Desperate Measures.

Zarador was invited to attend Seren's council, which he accepted. Seren informed them of the Elder Gods and their threat to Gielinor, which he dismissed as absurd as tales of the apocalypse, that Seren herself was irrelevant due to abstaining from the God Wars. Zarador offered access to the area around Feldip Hills for a garden, but this eventually failed as the other members could not agree on one location. When Kerapac came in to inform them of another solution, Zarador immediately agreed, as Bandos would never cower even to the Elder Gods.

Following Kerapac's backstabbing of the group, Zarador agreed to find and kill the treacherous Dragonkin.

The Battle for Gielinor[edit | edit source]

After hearing of the battle to save Gielinor, Zarador proceeded to inform Graardor and the rest of the Bandosian forces of these events before heading to the city of Senntisten himself. Once there he expresses annoyance that no one invited him or any other Bandosian to such a large battle and tells the World Guardian that Graardor is assembling his armies to join in the defence.

This information has been compiled as part of the update history project. Some updates may not be included - see here for how to help out!
Retrieved from ‘https://runescape.wiki/w/Zarador?oldid=35751621’
Categories:
Hidden categories: