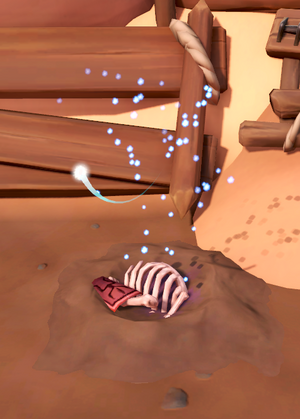 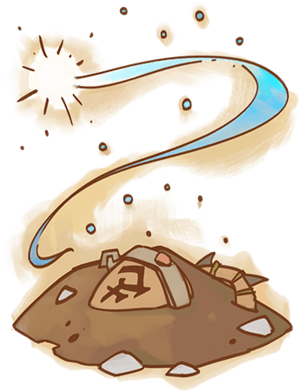 Time sprites are an Archaeology mechanic, akin to rockertunities, that provide increased experience when players excavate at hotspots that a sprite is hovering over. Doing so will provide the player with the Sprite Focus buff which increases Archaeology experience gain and boosts mattock precision; higher tiers of potency can be reached for these benefits the longer players excavate the correct hotspots.

A time sprite's appearance is that of an orb of light with a blue tail whirling above an excavation hotspot, with some additional light particles floating above the same spot. A sprite will not appear until the player has started excavating a hotspot nearby at that location.

Time sprites periodically move around between other nearby excavation spots of the same type if you are excavating at their location - if you are not excavating at the sprite's currently inhabited hotspot, it will remain there until you move to that spot, begin to excavate at a different set of hotspots nearby, or leave the area. Time sprites are localised to each player, so the location of one player's sprite does not necessarily coincide with the locations of others'. When the sprite moves, it triggers the filtered game message The time sprite has moved to another location.

With an archaeology cape equipped, an extra 1% sprite focus is gained when excavating at the correct location.

Equipping a pontifex observation ring or its upgrade, the pontifex shadow ring, will increase the active time at hotspots.

When the cosmic focus is carried, sprite focus will not drop below 10% while excavating at spots without the sprite present (though it will still decrease when not excavating). Upgrading the cosmic focus to a cosmic accumulator raises the minimum sprite focus to 20%, and each excavation action (denoted by experience drops as mentioned above) has a 1% chance to activate the accumulator, increasing sprite focus gain by 1% for 60 seconds; this stacks with the archaeology cape for a total gain of 4% focus every 4 ticks while the accumulator is active and the cape is worn.

The benefits of Sprite Focus are:

The experience bonus only applies to excavation hotspots. The sprite focus does not grant any extra experience when excavating material caches or restoring damaged artefacts.

Time sprites are blue, fluorescent creatures of an unknown origin that were first discovered in the Feldip Hills shortly after Mobilising Armies was dismantled. Wizards from Yanille spotted their blue glow in the distance and, after investigating the source, found at least a dozen sprites who led them to the Warforge and the goblin artefacts that were buried there. The wizards reported their findings to Guildmaster Tony, who wrote about the event in his journal and gave the creatures the provisional name 'Time Sprites'.[1]