The Edimmu resource dungeon is a resource dungeon in the Meilyr Clan district of Prifddinas. It requires 115 Dungeoneering to enter; this requirement cannot be boosted. It contains the Motherlode Maw, which also requires level 95 in all other skills and can be used once per day; a crystal-flecked sandstone rock, which can be mined for 25 sandstone every day; and a Dragonkin altar, which can be searched to obtain Vicendithas' Scribblings. In the same chamber as the Motherlode Maw is a dragonkin mural which may be examined. Players will be granted 100,000 Dungeoneering experience upon first entrance to the dungeon.

The dungeon contains Edimmu, and is the only known location in which they exist outside of Dungeoneering. A Meilyr Guard stands watch outside the Edimmu room. He will only let players in if they have an Edimmu or Creatures of Daemonheim assignment. 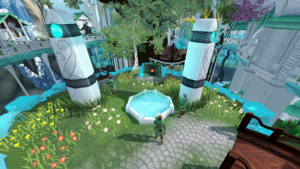 Vicendithas' Scribblings reveal that the Edimmu resource dungeon is located deep beneath Daemonheim, and once was a testing chamber. Examining the Dragonkin mural near the Maw confirms the location to be somewhere deep below Daemonheim. This testing chamber is where Vicendithas created the crystalline dragon and, indirectly, the gemstone dragons. The area where the Motherlode Maw is located is "The Feeding Trough"; the area where the altar and sandstone are located is the "Rest and Respite" room; and the area where the Edimmu are located is the "Learning and Knowledge Center", where humans were brought in as playthings. These humans likely became the Edimmu after they died, along with Meilyr explorers who died exploring the chambers thousands of years later.

At the other end of the Edimmu room is Vicendithas' personal quarters and laboratory, though it is inaccessible to players.