From the RuneScape Wiki, the wiki for all things RuneScape
Jump to: navigation, search
The Old School RuneScape Wiki also has an article on: osrsw:Dragon rider
This article is about the lizard race. For other uses, see Dragon rider. 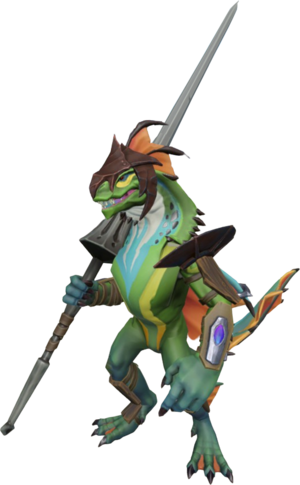 The Ilujanka (pronounced /ɪlu:jæŋkə/, il-loo-YAN-kah), also known as the Lizardmen, are a race of reptilian humanoids originally from a world known as Iaia. Most of them were brought by Zaros to fight for him during the Second Age, and after showing their talent at riding Dragons, they became known as the Dragon Riders.

They were first mentioned briefly by the warrior Viggora, during The Curse of Zaros. They were mentioned again in Postbag from the Hedge 43, where the Mahjarrat Enakhra denied their existence, before featuring in the Last riders book, and are also featured in the quest One of a Kind.

The Ilujanka have a well-developed culture, although it is fairly primitive due to the lack of magic or technology on Iaia. They live mostly as farmers and, given that at least one Ilujanka is known to wield a lance, presumably craftsmen as well. They live in peace with one another and with large creatures inhabiting Iaia's marshland known as gurhs. In return for helping them search for food and tending their eggs, these animals allow the Ilujanka to use them to plough their fields.

There used to be many tribes of Ilujanka, but due to their infertility, only one village remains. In the last decade, only one new Ilujanka was born.[1]

Superstition is an important part of the Ilujanka's lives. They believe in an Olun'dai, a sort of predestined fate in accordance with which all events occur. Ilujanka highly value their own role in the Olun'dai, called the Olun'det. Because of this philosophy, they see themselves as equals to the other species on their planet, even if only they are sentient. In the philosophy of the Olun'det, they do not fear their extinction. They prepare the world for the other species and have accepted death.[2]

They are able to bond with the gurhs and share their minds, thoughts, experiences and memories, a trait unique to their race. When a group of Ilujanka were brought to Gielinor by Zaros, they found that they were able to execute this ability on dragons as well. The Ilujanka proceeded to tame and bond with dragons and served in Zaros' army as Dragon Riders. Unlike gurhs, some of the more ferocious or tormented dragons are harder to calm down, such as metal dragons.

The book Last riders, dropped by the King Black Dragon, gives the greatest insight into their history. Written by Hannibus, last of the Dragon Riders, it details how they originated from another world, where they knew only peace, and lived alongside creatures similar to dragons known as gurhs, which they helped find food for in return for being allowed to ride them, so as to plough their fields. However, they had somehow become infertile and were at risk of dying out.

Just as things seemed desperate, however, they were approached in their settlement by Zaros himself, in the form of a shadowy man. Zaros offered them a cure for their infertility; all they had to do was accompany him from their world to his. Faced with such a prospect, such new hope, they accepted, and followed the Empty Lord through a portal to Gielinor, a world much different to their own.

It was in this world that the race developed an affinity with dragons, the closest animals to the gurhs that they had left behind, and thus they became known as dragonriders. They were able to tame the creatures, and ride them. They also had to quickly learn concepts that were redundant in their old world: combat, war, betrayal, loyalty and lies, with loyalty coming easiest to them, doing as Zaros commanded in the hope he would reward them with offspring. Despite it being a novelty to them, war also proved to be one of their strengths, and they began to be feared by Zaros' enemies, by whom they were dubbed the name by which they are most known: the Dragon Riders.

However, as time wore on, the Empty Lord did not gift them as he had promised, despite their petitions, telling them to wait until after the war, as Zaros required the powers of an Elder God to give them fertility, which would be obtained once the war was over. Ultimately the Dragon Riders, who once numbered in the dozens, were reduced and diminished to but a handful of five: Hannibus, Morvannon, Apropos, Balustan and Ablenkian. At this time Zamorak, Zaros' finest general, offered to fulfil Zaros's promise on one condition; that two of their remaining five join him as personal bodyguards. They agreed, with the impatient Morvannon and Apropos agreeing to join Zamorak.

After a week since this event, Zamorak - through the events narrated in the Curse of Zaros miniquest - acquired the Staff of Armadyl; a weapon which was believed to have enough power to kill Zaros himself. And so Morvannon and Apropos returned with this news, suggesting that the five of them should ride with Zamorak; however, Balustan and Ablenkian disagreed, believing it unwise to betray the Empty Lord, who promised to end their infertility after the war - if they warned him of the plot, surely he would reward them. Only Hannibus maintained a neutral stance, thinking that either action could lead to their extinction, and if they remained neutral, the winning side would thank them. Due to their infighting, they did not partake in the betrayal, as shown in Kharshai's memories of the event.

In the end, both Zaros and Zamorak disappeared - and all five were labeled traitors by their own allies. The Zarosians viewed Balustan, Ablenkian and Hannibus as traitors for not coming to Zaros's aid, while the Zamorakians believed Morvannon and Apropos abandoned Zamorak in his time of need. The two would eventually return in the Sixth Age; Zaros did not mention the Dragon Riders, while Zamorak believed that Morvannon had betrayed him.

Balustan and Ablenkian were killed by Zarosian-aligned ripper demons, Apropos was killed by Zamorak's vampyre allies, while Morvannon was torn by hellhounds commanded by the Twin Furies. The Zarosians also attempted to hunt Hannibus, but he was able to elude his pursuers and return to the cave wherein his race had been brought to the world, with his dragon still at his side. Hannibus would be able to hide here for many years until Enakhra would eventually hunt him down and turn him into a statue, intending to give him to Zamorak, but she was unable to deliver it to him, and the statue eventually came into the hands of Robert the Strong. Robert attempted to free him, but was unable to. His exact whereabouts were unknown afterwards, although he was still alive, albeit imprisoned, until the Sixth Age.

Morvannon, who had been killed by Zamorak's forces, was pregnant - no one had suspected it, as they believed the Ilujanka were infertile. Her mount Gorvek survived, found the egg and hid it in stasis until the time was right. From this egg hatched Vindicta, who vowed to avenge her people by bearing her mother's equipment. Vindicta would be trained by Gorvek, affiliated herself with Zaros and decided to avenge her mother and the others by killing the Twin Furies.

Decline and the End[edit | edit source]

In the Sixth Age, Hannibus would reappear and begin a journey to attempt to return home. He would be reunited with his descendent Sharrigan who would tell him and the World Guardian that Ilujanka have not been able to produce any eggs for the last ten years, and that the deaths are starting to mount, and the population is in decline. They had begun to carve their history into a great tree on their home plane, and were prepared to meet their fate. Hannibus, at the suggestion of the World Guardian, would choose to either return home or take Kerapac's offer to be put in stasis and seek one more chance at a cure for his people.

Regardless of their decision, Kerapac eventually created a serum after destroying the Stone of Jas and gave it to Hannibus. Hannibus in turn used it on his people. While incomplete, the serum began to have promising effects and more of the Ilujanka were able to bear children. After speaking with the World Guardian, Kerapac departed to make sure that Hannibus was using the serum correctly.