Guildmaster Tony’s dealt with grumpy goblins, disquieting deserts, and vexed vampyres, but don’t worry! It looks like he’s going back to his roots in this latest journal, which deals with a quaint old treasure-hunter and his interest in the cellar of a local pub. How wholesome!

Today I finally got on with some proper Guildmaster-y duties and met with the chap we’ve got running the Jolly Boar dig site. Normally I’m not fond of private individuals stomping around all over our excavations, but in this case, I agreed to make an exception simply because we were struggling to find anyone else to work there. I’m not surprised, really – pub cellars just don’t have the same allure as floating citadels and buried fortresses, although pubs are certainly appealing to some!

To be honest, this Movario fellow wasn’t quite what I thought he’d be. I expected some old eccentric hunting down battered jewelry to show off at the Grand Exchange. And while he was old, and plenty eccentric, something about him… his demeanour, maybe, as if something bigger is driving him? It feels at odds with this peculiar little site.

For one thing, he’d brought along his own tools! When I first encountered him this morning he was pottering around the edge of the site with an odd-looking device in his hand. Every so often it would beep and he’d swing round to face the sun, then scowl, press a few buttons, and start walking around again. I thought it looked highly amusing, and wasn’t able to hide my smirk before Movario turned around – a mistake I won’t be making again! 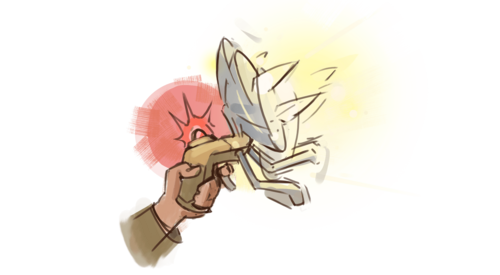 Far from the doddering old hobbyist I’d expected, it seems that Movario (if that is even his real name) is one of those truly unpleasant treasure hunters – the kind that lets nothing get in his way. He seemed to take offence to me being there, although I was too polite to remind him where his funding is coming from! And besides, I was a little put off by the armed bodyguard hanging out by the tent.

I felt I had to speak up when I saw him swat at the poor Time Sprites who’d gotten a little close to his machine, though. They were just trying to show him where to dig! But it’s no use reasoning with these people.

Movario insisted that it was the Time Sprites that were interfering with the device. Apparently it was working perfectly before they showed up, and now it keeps swinging eastwards. It’s supposed to detect ‘powerful energy’ or somesuch nonsense. Personally, I think it’s a load of rubbish, but as long as it doesn’t interfere with his work on the dig site I’m willing to let it slide.

Overall, not a bad day! I can’t wait to see the look on Movario’s face when he turns up nothing but broken pottery, though…

We really don’t hire anyone normal, do we?

I was woken a few hours ago by the sound of someone moving around outside. Not wanting to lose another journal page to those vultures at the Gielinor Gazette, I leapt into action and ran to the window. There, in the darkness, I could just make out the shape of a hooded figure moving through the Guild.

Now, by this stage I’ve frankly had quite enough of mysteries and shadows and bloody weirdos, so I fetched a lantern and went outside to put a stop to any nonsense.

The figure seemed totally absorbed in whatever he was doing – which meant I was able to follow him all the way to the centre of the guild, and up to where the Monolith is still lying in the ground.

I don’t know what came over me – all of a sudden I was ready to leap out of the bushes and do something really embarrassing. Luckily, the stranger turned at the last second and I saw who it was. Movario!

For a moment I thought he’d spotted me, and I prepared to put on my most stern Guildmaster voice to tell him off, but then someone else stepped out of the shadows towards him. It was Reiniger! And she was angrier than I’ve ever seen her.

I couldn’t hear most of the conversation (it’s very embarrassing to be caught hiding in a bush, actually) but a few choice phrases stood out, including ‘pothunter’, ‘treasure hunting lunatic’, and ‘we will cut your funding’. Gave me a good chuckle and sent Movario packing, too.

Still, I’m concerned by his interest in the Monolith. Why would a treasure-seeker like Movario be interested in an old rock like that? Could it be that his detector is working correctly after all?

Perhaps it’s time to do some investigating of my own…

Ah, so the elderly goth we’ve seen hanging around the Jolly Boar is a dig site supervisor, hmm? An interesting choice. Here at the Gielinor Gazette we don’t generally judge people by their fashion choices, but we can’t help but wonder if that Movario might be up to something.

Speaking of suspicious activity, while our intern was gathering these journal pages, she managed to capture the following image: 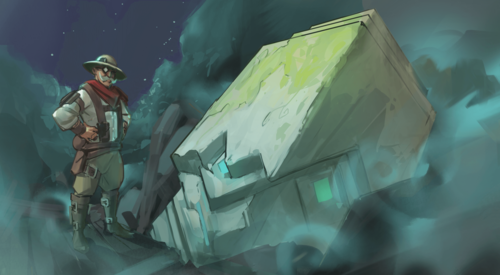 Is that… Guildmaster Tony? What could this mean?

Reveal Archaeology’s mysteries for yourself on March 30th, and in the meantime, keep your eyes peeled for the Road To Archaeology videos, which might just contain some mysteries of their own…