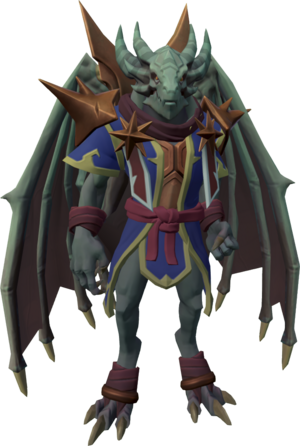 The Necrosyrtes are a war-like faction of Dragonkin[1] as opposed to the Dactyl, who started experimenting with offspring and withstand the curse of the Stone of Jas, retaining their sanity.

The Necrosyrtes were originally called Syrtes, being one of four Dragonkin factions; the Dactyl, Nodon and Aughra. They wished to prove themselves to the Elder Gods following the Great Revision, but this was halted when Kerapac activated his device and caused Jas to curse them. They were unable to withstand the curse and became crazed for power, relishing in killing those who abused the Stone.

The Necrosyrtes include all Dragonkin that have given into their urge to cause destruction and are often seen taking out their anger on False Users.[2]

The Necrosyrtes are responsible for the destruction of Kethsi and the Elder Mage Conclave, when the Kethsians began using the Stone for their own benefit. It has also been speculated that they destroyed the Fourth Age city of Saranthium.

According to Fairy Aeryka, they also smithed dragon armour, known to them as Orikalkum, which is now distributed by the Consortium of Extra-Planar Merchandise Transferral Specialists.[3]

The Necrosyrtes are most likely responsible for the Dragonkin Conflicts in the Fourth Age. They were defeated and apparently sealed by Robert the Strong after he killed an unnamed Necrosyrte.

When the Stone of Jas was taken by Lucien after it was discovered in an ancient Guthixian temple, the Necrosyrtes appear to be aware of its theft and plot in their castle, where they intend to 'bring terror and pain to the small races'.

Three of the Necrosyrtes, Sithaph, Strisath and Sakirth begin to cause some havoc in the fringe of human territories, starting with the pirate island of Mos Le'Harmless, causing minor damage. The three then decide to go for a larger settlement while searching for the False User bringing them pain.

After Lucien uses the Stone of Jas to empower himself after the rest of the Mahjarrat present turn on him, the three Necrosyrtes appear to confront Lucien over his misuse of the Stone. Idria, a representative of the Guardians of Armadyl, attempts to parley with them, but they simply incinerate her on the spot. They then battle Lucien, appearing to be on the losing end, only for Sakirth to appear (who had been hiding) and kill Lucien. They then take the staff's shaft and fly away.

Even though the adventurer used the Stone, the three Necrosyrtes call them a "stone-toucher" and do not kill them on the spot as with other users. They then decide to show the adventurer a vision of "what is to come", with a ruined Draynor Village. They state that they have started and attacked Edgeville following Lucien's death, but the town was eventually rebuilt with the adventurer's aid.

Sliske, the Mahjarrat, tracked down the Necrosyrtes after they obtained the Staff of Armadyl. Sliske found that Strisath had been guarding the shaft. Sliske captured Strisath in the Shadow Realm and then proceeded to repair the staff by attaching another orb made from the shards beneath the Ritual Plateau. Sliske then killed Guthix with the repaired staff.

Strisath was then put as a hostage in Sliske's "Grand Ascendancy". Strisath was released after Sliske decided to start his game off after seeing that the gods themselves would not. The World Guardian later freed Death, who proceeded to teleport himself, Icthlarin and the World Guardian out. Strisath unleashed his rage all over the citadel, before leaving after he had cooled down.

Strisath was then captured by Kerapac, who appeared to be even more out of control. The World Guardian was forced to help Kerapac after he attacked them, Hannibus and Therragorn above Daemonheim. Using their divination skills, they were able to enter Strisath's mind where they found a manifestation of Jas and defeated it. Strisath temporarily improved, but later reverted to his crazed state sometime after being released.

Sakirth, alongside Strisath and Kalibath, siphoned V's energy into the captured Dactyl Dragonkin: Tarshak. This was accomplished via use of the Mirror. Tarshak eventually became corrupted and transformed into the Abomination. After the player defeated Tarshak, the Necrosyrtes and Dactyl had a fight in Tarshak's sanctum. The Necrosyrtes returned the Mirror to the vault, where it was later taken by Kerapac. Kerapac then used the Mirror to destroy the Stone of Jas in Sliske's Endgame.

With the destruction of the Stone of Jas by Kerapac, the Necrosyrtes have been freed of the curse. It is unknown what happened to them after its destruction as they have yet to make an appearance after Sliske's Endgame.

Transcripts Necrosyrtes is mentioned in: