From the RuneScape Wiki, the wiki for all things RuneScape
Jump to: navigation, search
For the one in the Dragonkin Laboratory, see Black stone dragon. 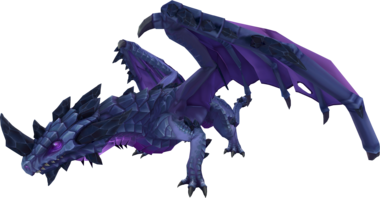 The black stone dragon is a dragon that is encountered in the Desperate Measures quest. She is the final boss of the quest and is the sister of the black stone dragon from the second elite dungeon, the Dragonkin Laboratory. She is being used by Kerapac as a shield barrier for his laboratory underneath Anachronia, as her 'aura' of shadow anima shields most other beings from locating or entering the laboratory.

The battle with the black stone dragon is a similar fight to the elite dungeons encounter, though it is easier as this dragon has less life points, weaker attacks, and a slower attack rate. She will similarly switch between using magic, ranged, and melee attacks.

The black stone dragon may occasionally use a special attack where she sends crystals toward to the player's current location, which will then land in a 3x3 area, centered on where the player was when she launched the special attack.

After 40,000 life points have been depleted, the next phase will begin. Unlike the black stone dragon in the Dragonkin Laboratory, there are no black hands in this encounter; this will instead cause the dragon to teleport to the middle of the room and start the ring of fire special attack. This attack causes a ring of white fire will slowly encircle her as well as allow her to heal low amounts of life points. This fire will do 1000-1200 damage as long as the player stands in it and will fade out shortly after the special attack ends. Damage the black stone dragon takes as this attack occurs is reduced to single-digit amounts. She will use this attack when she reaches 60,000 life points left as well.