From the RuneScape Wiki, the wiki for all things RuneScape
Jump to navigation Jump to search
For the achievement, see Taraket the Necromancer (achievement). 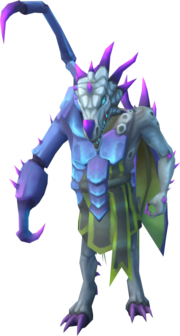 Taraket the Necromancer is the second boss of the Shadow Reef elite dungeon. He is an undead Dragonkin who is an ally of The Ambassador.

One of the Dragonkin who escaped the Great Revision, he would eventually be bound to the Stone of Jas by the elder god Jas. Though the curse gnawed away at the Dragonkin, Taraket joined the Dactyl to find a cure for it. He was apparently good friends with Kranon.

During his experiments, he fused an egg from the Queen Black Dragon with a fairy dragon, resulting in a unique egg which hatched into Mr. Mordaut. Taraket was extremely impressed by Mordaut's intelligence, but disappointed when he found out that Mordaut lacked the aggression and strength, deeming him a failure and abandoned him. He had also created a smaller version of him, but it didn't hatch until the Sixth Age when it was discovered by the Museum of Varrock's archaeologists.

Taraket would eventually move out to Ulthven Kreath where he performed a ritual with Kranon to obtain power. However, it backfired and Ulthven Kreath sank beneath the tides; Taraket did not escape and was presumed dead by his fellow Kin. Though he died, he would eventually be revived and obtained necromancy skills, something which he took great pride in. The power that revived him also apparently freed him from the Stone's curse. Taraket did not seem to have any bad standing among the remaining Dactyl Dragonkin.

During the ritual preparation, Ekitus wrote a request to Taraket to move the Aminishian monks away from the mwanu due to their eating some of their functionaries. Taraket replied back, telling Ekitus to simply bring up the consequences of delaying the ritual to the mwanu, knowing that it would fix the problem.

When Kranon was informed the World Guardian and their allies were coming to stop the ritual, Kranon had Taraket summon hordes of undead to stop their advance. Taraket soon confronted them in the amphitheater, where he attempted to stop them from advancing further but was killed in battle.

Additionally, a drop from the generic Shadow Reef drop table will be given. The following table has a 3/20 chance to get rolled on for boss monsters and mini-bosses, and a 1/50 chance for other monsters when holding a Lucky charm (Shadow Reef)[d 1]:

Transcripts Taraket the Necromancer is the author or co-author of: