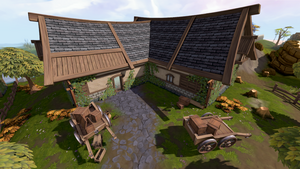 The Exam Centre is a location in Misthalin east of Varrock and south of the Varrock Dig Site and is central to several quests. While its access is open to all, it is only involved in members-only content. 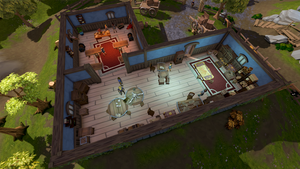 Inside the Exam Centre

It is also visited during The Golem quest to get Varmen's notes. They are found in the south-east bookshelf.

Clapping in the Exam Centre is part of various Treasure Trails. In addition, there is a locked chest under one of the red dragons' heads on the wall which plays a part in Treasure Trails. An examiner will give the player a puzzle box with the right clue in their inventory.

The fastest way to get to the Exam Centre is to use a Dig Site pendant. Archaeology journal teleports to a short distance to the northwest. Alternatively, the Varrock lodestone or the gnome glider transportation system could be used, selecting the destination "Lemanto Andra".

This information has been compiled as part of the update history project. Some updates may not be included - see here for how to help out!
Retrieved from ‘https://runescape.wiki/w/Exam_Centre?oldid=35682208’
Categories:
Hidden category: