From the RuneScape Wiki, the wiki for all things RuneScape
Jump to navigation Jump to search
The Old School RuneScape Wiki also has an article on: osrsw:Ancient Cavern
For the mining site, see Ancient Cavern mine.
Not to be confused with Waterfall Dungeon.

The cavern can only be accessed after the player has completed the first part of Barbarian Firemaking, requiring level 35 Firemaking. After that, the player must ask Otto about making pyre ships, and then will be granted access to the dungeon in order to fulfil the objectives required to make them. If a player dives into the whirlpool before completing these tasks, they will be swept away, losing a small amount of their life points, eventually washing up on the shore near Hadley's house. Movario states that the Ancient Cavern is of Dragonkin origin and possibly of the Second Age. [1]

To access the dungeon the player must have learned about funeral pyre burning, in Barbarian Training from Otto Godblessed. To enter the dungeon, the player must jump into the whirlpool off the jetty on the northern shore of the Baxtorian Falls lake. Upon entering the cavern, the player appears on a small platform with stairs to the lower level and can see a mithril dragon off in the distance in another part of the upper level. No creatures on the lower level are visible until the player descends the stairs, so the platform cannot be used for making ranged or magic attacks. 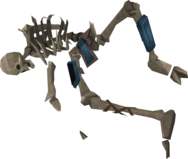 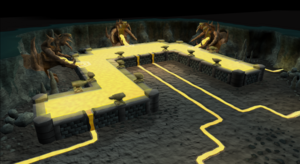 In the centre of the mithril dragon chamber is the mithril door, unlocked by the Dragonkin key, which players can assemble after completing the quest While Guthix Sleeps. Three metallic heads resembling those of dragons and a strange orb are found in the small room beyond the mithril door. Lighting each of the three heads, and as a result the strange orb, with the default click option grants access to the dragon forge and the dragonkin anvils. The forge itself is found next to Kuradal. Re-kindling the Dragon Forge is a requirement of the master quest cape.

The ancient cavern excavation site is located on the upper floor and contains three types of material caches: fossilised bone (3), compass rose (4), and dragon metal (3). These can be found between Kuradal and the dragon forge.