From the RuneScape Wiki, the wiki for all things RuneScape
(Redirected from Mr. Mordaut)
Jump to: navigation, search
The Old School RuneScape Wiki also has an article on: osrsw:Mr Mordaut

Mr Mordaut is a very old, friendly and wise draconic professor, currently employed as the Professor of Unnatural History at the Varrock Museum. His office is located behind the door at the back of the stairs to the basement. He previously ran the Surprise Exam random event. He can be found in his office in the museum, the entrance to which is located on the back of the staircase of the lowest floor. Here he may be visited to discuss the history and nature of dragons and even the Dragonkin.

Mr Mordaut was a creation of the Dactyl Dragonkin Taraket, who fused an egg from the Queen Black Dragon with that of a fairy dragon.[1] He was an attempt to create an intelligent dragon, most dragons being brutish, aggressive and unintelligent beasts. Mordaut was considered a failure by his creator because, although he had the intelligence the Kin desired, he had none of the aggression, desire to harm others, or power that makes a dragon a dragon. Even to this day, he is unable to muster anything more than a spit of dragonfire.[2] As such, Taraket discarded Mordaut.[3] 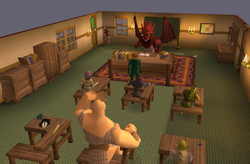 Mr Mordaut in his classroom of students.

In his youth he attempted to prove his creators wrong, but after trying to eat his first adventurer, he spat them out, for it just felt wrong to him.[2] He has since become a 'cheegan,' only eating cheese and cheese-related products.[4] His failure to do what he was created for sparked an ambition in Mr Mordaut to lead others to their destiny, so he became a teacher.[5] He taught a small classroom of students, most of them being non-human. One notable student of Mordaut is the demon butler Alathazdrar, who remarked that he was most "conflagratory and irascible to the younger students."

Mr Mordaut at his desk.

At some point in the Fifth Age, Mr Mordaut was approached by an individual known as the Mysterious Old Man, who was the leader of a large network of acquainted people who would occasionally host short activities for people's pleasure and distraction, although often against their will, collectively known as the random event programme. The two agreed that Mr Mordaut would subject anyone to be teleported to his classroom by the mysterious old man to a short IQ test, to be rewarded with some knowledge. These occurrences would become known as the Surprise Exam.

Mr Mordaut was also one of the commentators during the Gielinor Games, a large sports event hosted in the summer of 169 of the Fifth Age, wherein various races participated. While commentating, he said dragons are especially fascinated with collecting things, and that he himself likes to collect rare coins. He mentioned that he possesses an Avarrocka Guinea coin, after which Tentacle, a fellow commentator, called him "dragon geek". At the Games, Mordaut could be heard making bad cheese jokes, attempting to "civilise" Thok and trying to have intelligent conversations with a zombie. He appears to have appreciated the experience, especially enjoying people tripping and falling at the cheese rolling race.

Shortly after the Games, the mysterious old man went into retirement and the random event hosts disbanded, Mordaut amongst them. For reasons unknown, the dragon retired from teaching altogether and instead received employment at the Varrock Museum as the head of the Unnatural History department, providing much the same function as natural historians, but, where they focus on more ordinary creatures, Mordaut focuses on the more unusual species, such as mythical beasts and sentient plants.[7] He is an expert on the dragons and Dragonkin and is currently conducting research about the legendary dragon riders from the Second Age.

Due to his status as a dragon, he decided to leave the more social side of his job to his human counterparts. As such, he mainly keeps to himself and is most often found at his desk, which is located in a pocket dimension, surrounded with souvenirs from his teaching days. Despite his isolation, he enjoys his work. For example, he usually pretends to be an exhibit piece for the museum when young children accidentally stumble into his office, but occasionally gives a roar to scare them.[8] He also curates the museum's coin collection, with an Avarrocka Guinea being one of his most prized possessions.[9]

In One of a Kind, Mordaut found one of Hannibus' journals, believed that it would finally uncover the legendary Dragon Rider's hidden whereabouts. He recruited the World Guardian to assist in the task, which led them to freeing Hannibus from his stone prison.[10] They later assisted him in returning to Iaia, or returning to stasis to find a cure for his dying race with Kerapac's assistance. After the events, he may be spoken to about them, where he expresses his desire to see and speak with Hannibus, Kerapac and Therragorn sometime in the future.

In Curse of the Black Stone, the World Guardian visits Mr Mordaut on translating a cypher Hannibus had found. Mordaut was able to translate it, but informed them that it was only part of a map and they would need to find the other pieces.[11] After recruiting the King Black Dragon into the strike force against The Ambassador, the World Guardian decided to pay a visit with Hannibus in tow. Mordaut was shocked and humbled by the Dragon Rider's presence, requesting a signature to commemorate the event.[12] Hannibus told Mordaut if he knew of any dragons who could help, which he sadly stated there were none. Before Hannibus could leave however, Mordaut told Hannibus that there was another dragon rider fighting for Zaros in the Heart of Gielinor.[13]Hannibus thanked Mordaut and promised to have a long, lengthy conversation with him once the Ambassador was stopped.

Following the threat of Kerapac's plans to destroy Gielinor to stop the Elder Gods, King Roald commissioned Mr Mordaut to create a boat to sail to Fossil Island, believing that Kerapac may have fled there to begin the next phase of his plan. Mordaut was more than ecstatic and took the offer, knowing the previous foreman was completely incompetent due to his ten years of work leading all to failures and draining the museum's resources, even admitting that he was baffled with their performances. He promptly disgraced him in the process.

He acquired the services of Eva (for free) and began recruiting numerous adventurers to assist in the process of creating his boat to access the island. During the first three days, the adventurers helped tend and cut Eva's magical trees and reinforcing the boat's hull. On the third day, a furnace was added and supplied with ingots for adventurers to make rivets to reinforce the boat. On the sixth day, a boat engine and a workbench appeared to allow adventurers to tinker with the engine using their Invention skills or empower wards with their Magic skills to assist breaching the stormwall surrounding the island. On the ninth day, the boat was nearly completed, and all that was needed was to channel the crest with energy and sew some sails for the masts.

In return for the adventurers' services, Mordaut offered various rewards such as parts for the Varrock Agent Outfit, a flag resting emote, Mordaut Jr. and the Stormbreaker title. If Mordaut Jr. is inquired about, Mr Mordaut tells them that the archaeologists unearthed the egg and it hatched, pleased that he was not Taraket's only unique creation. If the adventurer assisted Mordaut enough, he allowed Mordaut Jr. to travel with them to explore in his place, having missed his chance during his formative years.

With the barge completed, the adventurer led a small expedition to the island to set up a base camp. While exploring, they were ambushed by a pavosaurus rex, but escaped with the help of Irwinsson, who brought them to an abandoned temple as it was safe there.

The adventurer began assisting in the construction of the base camp, building a town hall. Upon its completion, Giles brought Mordaut along, who set up office in the newly constructed building. Mordaut was surprised with the island, as he had expected fossils, not living creatures. He summarized that something was wrong with the island, as they were far too north to sustain such viable life and decided to call the island Anachronia, the land out of time. He advised the adventurer to explore the island while they built up the camp, as it was too dangerous to explore unprepared.

Mr Mordaut temporarily abandoned the camp when Kerapac attempted to have it razed by sending a group of crazed dinosaurs. He returned once Kerapac was stopped.

He later informed the World Guardian that the archaeologists had spotted what they believed to be Kerapac and requested they follow up on their lead to make sure Kerapac was not doing anything suspicious. The World Guardian investigated these claims and found an undamaged, hidden section of the laboratory in the volcano, but the Dragonkin that the archaeologists had spotted was actually Vicendithas, Kerapac's son.

After Kerapac had been dealt with, Mordaut began organizing teams to explore the Dragonkin buildings scattered all across the island. Upon hearing that the World Guardian had been honing their archaeological skills, Mordaut invited them to assist in the excavation efforts all across the island, as they contained immense Dragonkin history. Due to the World Guardian's efforts, they were able to explore many of the island's facilities, such as the Crypt of Varanus, the Dragonkin outpost, the Moksha Ritual Site and a strange city in the south-eastern temple.

The team sent to the xolo city, while the World Guardian found and restored a pair of artefacts and placed them atop one of the houses and temples, filling them with mysterious shadow energy. They dumped it into the mysterious monolith at the Archaeology Guild, which caught Mordaut's attention as he surmised that there was a link between the city and the monolith.

By talking to Mr Mordaut about the Dragonkin and presenting your findings to him, you will be rewarded with further insight. The things you can talk to him about and their requirements for doing so are:

By providing information on all of them you will be rewarded with some Kudos and a dragonkin lamp for 25,000 Slayer experience.

Transcripts Mr Mordaut is the author or co-author of:

Transcripts Mr Mordaut is mentioned in: 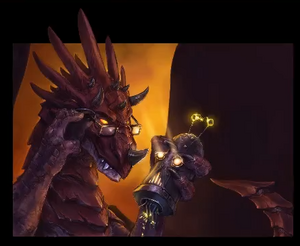