From the RuneScape Wiki, the wiki for all things RuneScape
Jump to: navigation, search
For the achievement, see Desperate Times (achievement). 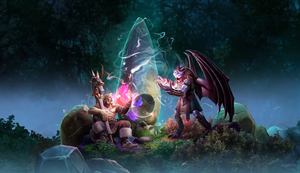 Artwork for the quest.

Desperate Times is a quest featuring Seren and is a continuation of the Elder Gods quest series following on from the player's encounter with Jas during Sliske's Endgame. It was first announced in the Month Ahead of May 2019.

Talk to Seren on the 1st floor[UK]2nd floor[US] of Burthorpe Castle. She will invite you to join her council and explain her cause, stating that the elder gods see life on Gielinor as food for their unhatched children. She plans to appeal to the elder gods and show them that life is worthwhile, as she was taught to see life as worthwhile. The first elder god she seeks to impress is Bik, with the plan being to build a garden. She tasks the player with negotiating a location, task force and seed collection from the assorted council members.

For the land, speak to either Zarador to use the Feldip Hunting Grounds, Vanescula Drakan to use the swamps of Morytania, or Osman to use the northern desert. For the task force, talk to either Moia to summon an undead force, Brundt the Chieftain to use the Fremennik, or Sir Amik Varze to use the White Knights. For the seeds, talk to either Azzanadra, Garlandia or King Roald. Once a combination has been selected, confirm your choice. The council will reject the suggestion however for varying reasons, such as the Fremennik being unsuited to the proposed environments and Vanescula viewing the White Knights as an invading force. If you logout or exit to lobby, the combinations selected will be reset.

After three failed combinations, Kerapac will appear and claim that Seren's plan of appeasement will fail and was proposed out of sentiment. He proposes an alternate plan, to use the Elder Artefacts to put the elder gods into a permanent sleep. The council will all agree with Kerapac, except for Seren. Thok will insist on joining, believing himself able to scare off the Elder Gods. Kerapac gives in, and instructs you and Thok to travel to the Needle, west of the Piscatoris Fishing Colony. Fairy ring code AKQ can be used to reach the fairy ring just south of the colony or home teleport to the Eagle's peak lodestone and take the row boat with Kathy Corkat. 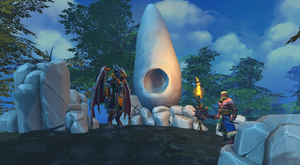 Kerapac and Thok at the Needle.

Head to the Needle and talk to Kerapac. He will say there is a power resonating from the artefact and ask if you can feel it. Pick any option. Kerapac will say he can charge the Needle, but this will cause temporal instabilities to spawn. Five instabilities will spawn, which can be closed by clicking on them. One can be found near the Needle, two can be found in the front yard of the nearby farmhouse, and the final two can be found on the 1st floor[UK]2nd floor[US] of the farmhouse. Once all five are closed, return to Kerapac. He will remark that, while the Elder Artefacts are not truly sentient, they have something resembling a consciousness, and that the mind of the Needle has refused him. He will state that he needs assistance from a powerful human mage, Charos, whose magic has affected the minds of others in the past.

Head to Charos' tomb located under McGrubor's Wood. The fastest way to get there is by home teleport to the Seer's Village lodestone or via Fairy ring ALS and heading south-east to the mysterious hole. Once in the tomb, investigate the coffin to get a letter from Charos, stating that Charos is aware of what you are attempting and is eager to meet you. He challenges you to play one more game in order to find him: you must locate three keys hidden in three locations, all of which are alluded to by riddle. These keys will empower his old necklace, allowing you to remove his disguise once you find him. If you have previously destroyed the necklace, you can get another from Uri (if you've added the trinkets), or from the Lumbridge graveyard. 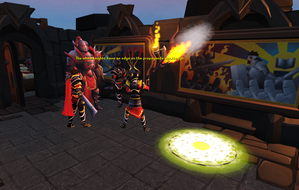 Caution: If you log out or enter the lobby while in a puzzle room, it will reset the current puzzle!

The first key can be found at the Varrock Dig Site, near the entrance to the Empty Throne Room. A group of students and examiners will be standing around a strange portal. (Portal may also be outside the entrance by Celia Diggory). Step into the portal, which will lead you to a room with a sliding puzzle in the centre and several smaller rooms containing chests located around the perimeter. (The tiles that make up the slider puzzle will not budge until at least one chest has been unlocked.)

In order to solve the sliding puzzle and obtain the key, the doors leading to rooms with chests must be unlocked by stepping on the coloured magic portals on the floor. (The colour of each portal does not correspond to any particular door, and no particular combination of portals must be stepped upon in order to unlock a specific room. Try each portal until the door to the room you wish to unlock has opened.) Once a room containing a chest has been unlocked, the chest within must be unlocked by completing a riddle. Solving the riddle properly will allow you to obtain a four-letter code which must be entered into the combination lock interface in order to successfully unlock the chest.

The following table outlines the possible riddles a player may be required to solve in order to unlock a chest: 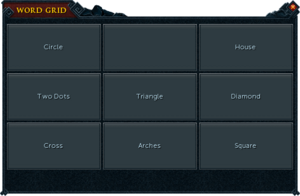 Once the chest is unlocked, it will reveal part of a word grid, which is the solution to the sliding puzzle. Unlock all of the chests to obtain the completed word grid and solve the slider puzzle. Each word is a description of the tile it represents, located within a three-by-three grid. In order to complete the slider puzzle, each tile on the ground must be located in the same position that corresponds with its location in the word grid.

The puzzle is solved just as one would solve a Treasure Trails puzzle box or Dungeoneering sliding tile puzzle. If done successfully, the room will shake and you will obtain a key, which will automatically combine with the necklace as you receive it, and a magic portal leading outside will appear.

The other two locations are:

Solve both slider puzzle rooms as before in order to obtain the remaining two keys. After obtaining the third key, you will get a bloody clue scroll with "URIT" written repeatedly across it. This scroll works the same as the one found during You Are It, and reading only the letters that are different spells out "RELDO". The player then mentions that they think they should head to the Varrock Palace Library.

Return to the Varrock Palace and speak with Reldo in the library. Opt to use the newly-empowered necklace and Charos will reveal himself to you, explaining that Reldo was merely a well-placed disguise. Kerapac and Thok will join you and discuss plans on what to do with the Needle. Kerapac will commission Charos with creating a device of his own design, with which he hopes to subdue the Needle. Thok will disapprove of this approach, stating that they can cow the gods into submission instead. Charos suggests Thok go do that and Thok will leave. Charos will request three rune bars, two runite stone spirits, 10 gleaming energy and 10 mind runes in order to build Kerapac's device. Get these items and give them to Charos: he will build his device, then instruct you to meet him at the Needle. 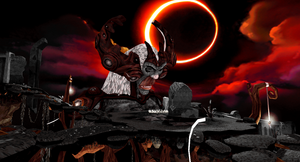 The warped version of Naragun.

This section contains (some rather well-done) voiceovers in the background that do not include captions. You should turn audio on so that you do not miss them.

Charos prepares to use his device on the Needle. Before he can, however, Gail appears and attacks him and Thok. Kerapac will send you into the Needle while he fends off Gail's attempts to stop them. 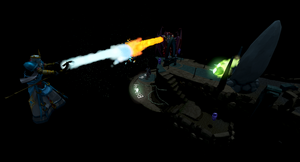 The first anima puzzle, as Saradomin and Zamorak fight in Guthix's chambers.

You will end up in the deepest part of Guthix's Cave. As you wander around the cave, clones of Sliske will attack. Defeat them and collect the broken mask shards. Clone spawns seem to be triggered by stepping in specific areas; make sure to explore thoroughly to make them all spawn. Once five clones have been defeated and five shards obtained, reassemble Sliske's mask and wear it. You will be transformed into Sliske. Head to the end of the cave, where Guthix is, and kill him. You will be transported to Naragun next. Find and harvest five memories relating to Seren, Armadyl, Zamorak, Bandos and Saradomin. Guthix will appear by the fairy ring and ask that you talk to him. After talking with him, you will be transported back to his cave. In the cave, switch each of the mutable anima once. 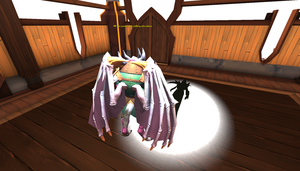 An avatar of Kerapac discusses his plans.

After this, you will appear in a facsimile of the Empyrean Citadel. Sliske will appear in the middle platform and begin talking about gods, presumably intended towards Jas. Head to the west into the room with Gielinor and use the agility shortcuts to make your way around the room. You will go through all the rooms you did during the Missing, Presumed Death quest, but with either Kerapac or Sliske appearing and talking about their plans. Making it to the end and jumping down will instead bring the player to a new area. 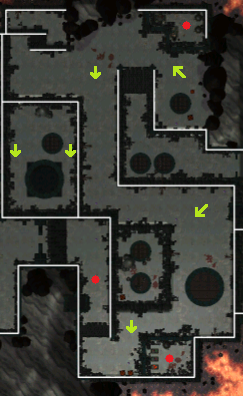 The player will be brought to the upper platforms of Sliske's Labyrinth, where anima will now also enter temporal portals, which the player may enter as well to go to a different area of the room. Changing all the redirect anima to go to Kerapac will advance the quest.

The final room appears as the end area of the Dragonkin Laboratory, although some nodes will be coloured orange and frozen in place. To unfreeze these, players must find memory wisps (one in the room to the north-east, one in the room to the south-east where Verak Little would appear, on the stairs to the west leading to where the Black Stone Dragon would appear), and listen to Kerapac talk to his son Vicendithas about his plan to return to a place called Orthen. Once all energy is redirected to Kerapac instead of Gail, a cutscene will occur.

Kerapac gains control of the Needle.

The cutscene shows Kerapac gaining control over the Needle by stabbing it with the Staff of Armadyl (with Charos' device allowing Kerapac to retain his memories), reverting Gail into her human form Primrose. Using his newfound power over the Elder Artefact, he teleports it away and flies off towards the east, out past the ocean to prepare for the next stage of his plan.

Talk again to Charos, who is furious at being backstabbed, and Primrose, who must go see her mother. Return to Burthorpe and let the council know what happened.

Seren will be told that Kerapac had set up the World Guardian, and that using the Needle's power, Kerapac seems to have a plan that involves the sacrifice of one planet - Gielinor - in order to destroy the Elder Gods and save all the other planets permanently. Seeing as the council was betrayed, and that a third party's plan is in effect to destroy all life on the planet, Seren begins to formulate how to stop and kill Kerapac with the aid of the council and Charos. 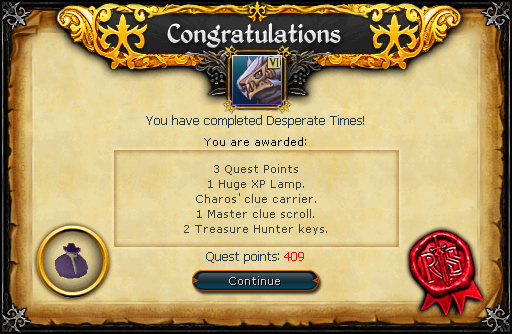 Desperate Times is not currently required for any quests or miniquests.