From the RuneScape Wiki, the wiki for all things RuneScape
Jump to navigation Jump to search
Not to be confused with Thak.
ThokThok of DaemonheimThok, Master of DungeoneeringThok (rex wrangler)Thok the Amazingness, Thok Bloodrager? (edit) 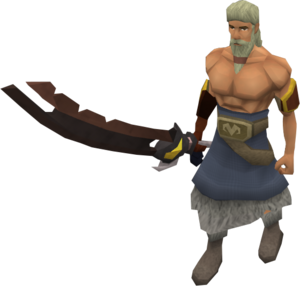 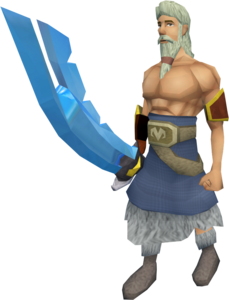 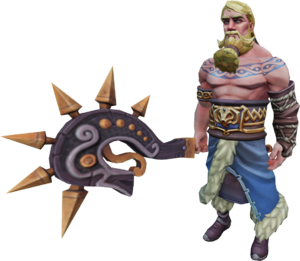 Thok Thokson of Daemonheim is a mighty Fremennik champion located at Daemonheim. He can be found in the Fremennik castle, just south of the castle. He is the master of Dungeoneering. He is one of the few Fremennik that free players can encounter.

When asked about the cape on the stand behind him, he tells the player that no one believes that he has mastered Dungeoneering, and is one of only three "masters" of a skill to not have completely earned his title (the others being Orla Fairweather of Divination and Doc of Invention). Thok is currently shown not wearing the cape of Dungeoneering, but the cape is shown next to him on a stand.

Players can check their hard mode progress with Thok via a right-click option.

Thok has a younger brother named Marmaros who writes heavily about their adventures together in Daemonheim in his letters. In Postbag from the Hedge 44, it was confirmed that Marmaros was the Rewards Trader. Thok and Marmaros have a younger sister by the name of Bryll, who can be found in Burthorpe. According to the Dungeoneering journals, he is a follower of Guthix.

Thok suffers from furophobia, an irrational fear of ferrets.

When Daemonheim emerged, Thok went there for fame and glory. He was accompanied by his younger brother Marmaros. When they arrived, the seers put a barrier to prevent outside items from being brought in, and inside items from being brought out. Thok attempted to bring his trusty battleaxe with him, but the barrier prevented him from doing so, and he eventually relented.

The pair slowly built up their equipment, clearing floor after floor of monsters. Thok quickly battered every enemy in his path, only stopping when faced with puzzles that he could not solve, having to rely on Marmaros to do so for him. It was during this time he encountered his first love, Pretty Lass. By this time, they were using primal weapons, allowing them to clear floors even faster.

In one floor, the pair killed Stomp, but it severely wounded Marmaros before dying. Thok traveled to the next floor, killing everything in his path including numerous boss monsters before encountering Pretty Lass once more. Pretty Lass told him to find "something cold". In Thok's case, he left behind a path of destruction as he returned to the frozen floors, killed a luminescent icefiend and used its remains to heal Marmaros. Thok sustained several injuries doing so.

While clearing another floor, Thok proposed a contest to see who could kill the most monsters on the next floor. Before they could kill the boss monster, an unholy cursebearer, it somehow survived its skull getting impaled by Thok's primal two-handed sword and fled to the next floor. Thok was left without weapons, but made up for this by using his fists, killing more than his brother. He also reclaimed his sword from the unholy cursebearer, initially sparing it as long as he did not see it again. Thok proceeded into a dead-end and returned to the same room, where the cursebearer was celebrating its survival. Thok, seeing the cursebearer again, instantly killed the cursebearer with a single punch.

Marmaros neglected to treat Thok's wounds, causing their trek through the occult floors to be extremely miserable, as it attracted swarms of undead to their position. They were eventually able to reach the warped floors, eventually reaching floor 59, where they found and defeated a hope devourer. Thok was unaffected by the hope devourer's passive drain, most likely as a result of his lack of intelligence. At the final floor, Thok was disappointed to see a dead man crawling with maggots instead of the fame and glory he expected just as malicious voices filled their heads. Marmaros was not so lucky; having lost all hope from his encounter with the hope devourer, the voices pushed him over the edge and he attempted to kill himself, prompting Thok to break both of arms to protect him.

A strange man soon appeared before the two. Thok found him to be unusually clean for a Fremennik but also sensed him to be extremely powerful. The man claimed that they were not chosen to see what was at the bottom and healed both of them. He then ordered the two to leave; as he would not take no as an answer, and that the man could easily kill both of them, Thok reluctantly complied, and both his and Marmaros' memories of the incident were erased. Thok knew that he had reached the bottom, but the lack of memory caused everyone to doubt his claims. Eventually, an adventurer discovered all of their letters, proof that the pair had reached the bottom of Daemonheim.

Thok had only written two letters, only doing so whenever his younger brother was incapacitated.

The following takes place during The Needle Skips.

Thok is one the characters that manifests from a book belonging to Primrose that were enchanted by her father, Joss.

Thok came to Seren's council, inviting himself in the process even though Brundt had arrived as a Fremennik representative. He brute forced his way into Kerapac's team; the Dragonkin reluctantly allowed him in. After Kerapac backstabbed the group, Thok resolved to find and beat up Kerapac for his deception.

A year after Kerapac's betrayal, Thok accompanied Charos to Anchronia, where they made their way to the base camp; Thok slaughtered many dinosaurs in the process. His lack of intelligence greatly irritated Charos. He also fell in love with Laniakea, apparently moving on from Pretty Lass due to being from different worlds. After his second run-in with Kerapac, Thok proceeded to beat up some dinosaurs for information before returning to the base camp. He helped defend the base camp from rampaging dinosaurs alongside Charos, Laniakea, Hannibus, giving the World Guardian an unusually powerful stick as their weapon. Thok remained outside Kerapac's hidden laboratory until the black stone dragon inside was killed, upon which he helped them escape from the collapsing laboratory.

After Kerapac was defeated, Thok tried to get Laniakea's attention, but was unsure of how to. He initially decided to bring her some liverworts as something for her to kill, but Charos immediately shut that idea down because they were dangerous, even though he understood his intentions. Thok then decided to bring her the fang of a giant dinosaur, but Charos shot that idea down too. Charos suggested that he wait as it was unlikely anyone else would try to go for her, and that he should ask her what he wanted. Thok immediately thought to bring her a bunny, much to Charos' disappointment.

Thok of Daemonheim may occasionally appear at the Anachronia Dinosaur Farm on Anachronia. He may be sold corbicula dinosaurs in exchange for beans. As a large-sized animal buyer, he will appear or renew his order for corbicula dinosaurs every three days and purchase up to 6 animals before leaving, unless the player is at least 'Senior Master Farmer' rank in the farming reputation system; then he will buy up to 12.

Transcripts Thok of Daemonheim speaks in:

Transcripts Thok of Daemonheim is the author or co-author of: