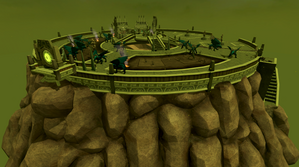 A view of the mountain

Mount Firewake is a great mountain located in the plane of Kethsi, and prior to the Adamant and Rune dragon update it was only mentioned in the Ritual of the Mahjarrat quest. It is accessed by the World Gate and right-clicking it for quick access.

After the Stone of Jas underwent a six year journey to Kethsi, the inhabitants of the plane decided that the Stone should be placed upon this mountain by the Elder Mage Etheron, leader of the Mage Conclave of Kethsi. While the Stone of Jas rested upon Mount Firewake, it brought great prosperity to the realm of Kethsi and its people, though this was short-lived, as the Necrosyrtes, a faction of Dragonkin who gave in to the Curse, were angered by its use by any others than themselves, and laid waste to Kethsi.

Following its destruction, it remained abandoned for thousands of years until Forcae arrived, fleeing from the Necrosyrtes after his previous laboratory was compromised by them. This is where he would create the rune dragons.

Mount Firewake is the location of rune dragons and elite rune dragons, as it is "one of the only places in Kethsi lore that players know about".[1] There is a mural that can be cleansed with a fully charged Dragonfire shield (50 charges) for 80,000

experience and then translated with the Dragonkin Primer after the quest One of a kind. Cleansing the mural is a requirement for the master quest cape. A Kethsian anvil can be found next to the mural.