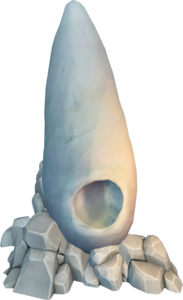 The Needle is an Elder Artefact which featured heavily in the spin-off game Runescape: Idle Adventures, where it was prominently used by its main character. It was first mentioned in RuneScape by Jas during Sliske's Endgame, and first appeared in-game during The Needle Skips quest located in a desolate forest west of the Piscatoris Fishing Colony.

According to Saradomin, the Needle can be used to unravel Time itself, creating Threads of Time out of concentrated anima from that reset timeline. These threads can then be woven back into the tapestry of existence, growing fate itself. These rewoven threads can then be used to create more of themselves as the anima of the world is once again increased in this reset timeline. This creates a cycle where the world's anima gradually and purposefully restores and improves itself with each reset.

Guthix describes a hypothetical broken Needle as one of the major threats to the universe and existence. The Great Revision and Shadow Breach[1] are the other existential threats listed by Guthix.

Little else is known about the Needle's early history. It hasn't been known to have been in possession of any god or mortal. The first modern account of the Needle is by Megan, who is shown the Needle by its guardian Gail in the late Fifth Age. Apparently the Needle had gone completely unnoticed as it is sitting atop a hill in plain view, possibly thanks to its mundane appearance, that makes it look nothing less than a peculiar rock.

The Needle plays a prominent role during The Needle Skips quest, resembling a stone monolith as opposed to a sewing needle. During the quest, the player must use a shard of the needle to visit the past memories of a family living west of Piscatoris to gradually uncover the mystery over a body frozen in time. The shard allows more memories to be unlocked by searching for keywords from the story and allows the player to visit multiple instances of the area affected by the needle.

During the quest, Megan asks Gail to use the Needle to reverse time by 30 days to prevent her daughter Primrose from dying due to illness. The Needle would affect all beings and its surrounding environment not within close proximity to the Needle itself, leaving those close to it unaffected and retaining all their existing memories. After using this ability, the Needle requires time to pass naturally as it draws power from the anima mundi to be able to rewind time again. While the Needle can be used to rewind time further than 30 days, doing so causes the user to be permanently bonded to the elder artefact, resulting in physical transformation and a loss of all memories prior to its use, as shown by Primrose becoming Gail after rewinding time 3 years. Furthermore, the Needle can also be used to indefinitely pause and restart time by saying the pausing phrase "Wenla".

As the Needle's appearance and abilities differ between Runescape: Idle Adventures and The Needle Skips, it is unknown if these objects are different, the same or connected in any way.

The Needle is a prominent plot point in the quest Desperate Times, where the dragonkin Kerapac requests the help of Thok, Charos, and the World Guardian to attempt to use its power to cut off the energy supply from the Elder Gods. After trying to harness its energy and summoning temporal instabilities, he asks for Charos' help in creating an esoteric device for use in manipulating the Needle. When Kerapac tries to use this device, Gail attacks the group, defeating Thok and Charos quickly, and battling Kerapac, who then sends the world guardian into a spatial-temporal rift through the Needle. The World Guardian has to complete a series of anima-redirecting puzzles to direct anima away from Gail and into Kerapac. After three successful redirections, Kerapac stabs the Needle with the staff of Armadyl and keys its energies into himself, making the needle respond to his whims. Gail's powers and memories from the Needle are stripped away and she is transformed back into Primrose permanently. Kerapac then teleports the Needle to Orthen before flying off there himself, empowered by the Artefact.

After binding Kerapac and the Nodon to her service, Jas ordered him to lead her armies into Senntisten to reclaim the eggs stolen by Azzanadra. Jas gave him the Needle, alongside the Siphon and Mirror to help him in his task. Kerapac would use the Needle to create time-threads in his attempt to kill the World Guardian, but despite his mastery over the Needle, Kerapac was defeated. The Needle remains in Senntisten.

The Needle, like all other Elder Artefacts, were created by the Elder Gods to be used as tools in their attempt to create the perfect world Gielinor. After the creation of Gielinor, the Elder Gods started their slumber below the surface of the world, awaiting the next great revision.

Buried within the heart of the White Wolf Mountain, the Needle was among the majority of the artefacts that were left behind on Gielinor.

After the mortals and the young gods arrived in the First and Second Ages, many of these artefacts were found and claimed. However, the Needle remained undiscovered throughout most of Gielinor's history. The god Saradomin was the only one able to sense its presence on Gielinor, thanks to the properties of the Elder Crown, but he was never able to find it.

After Guthix's death at the beginning of the Sixth Age, the Anima Mundi of Gielinor destabilised. The conflicts of the gods that followed caused many wounds to appear in the world in the form of energy rifts.

This caused the Needle to create an avatar. Not knowing who they were, they travelled around Draynor village, Lumbridge and Falador. Helping people with their problems, and teaching them new skills before eventually being drawn to White Wolf Mountain.

There, they were greeted by Saradomin, who discovered the location of the Needle when it created its avatar. He observes as the protagonist obtains the Needle and first uses it to unravel time, and explains his theory of the Needle's function. He then asks them to help him and his followers by removing the corrupting influence of the undead, and to increase the strength of the White Knights. 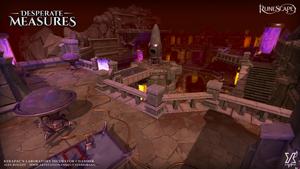 Sally continues to wield the Needle, increasing and healing the world's anima by helping the people of various cities.