From the RuneScape Wiki, the wiki for all things RuneScape
Jump to navigation Jump to search
GloutGlout (arcane associate)? (edit) 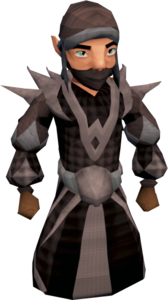 Glout is a gnome from Arposandra who was introduced in the Song of Seren event and features in Desperate Times. His appearance on the 1st floor[UK]2nd floor[US] in Burthorpe Castle was announced at 15:00 UTC on 12 May 2019 with:

Glout may occasionally appear at the Anachronia Dinosaur Farm. He may be sold arcane apoterrasaurs in exchange for beans. As a large-sized animal buyer, he will appear or renew his order for arcane apoterrasaurs every three days and purchase up to 6 animals before leaving, unless the player is at least 'Senior Master Farmer' rank in the farming reputation system; then he will buy up to 12.