Varrock Dig Site, is an archaeological excavation area just east of Varrock, at the Archaeology Campus. Players need to proceed far enough into The Dig Site quest in order to fully use it. It is visited during several quests, including The Dig Site, The Golem, Desert Treasure, The Temple at Senntisten, Ritual of the Mahjarrat, A Soul's Bane, and Children of Mah.

During the Dig Site quest, players learn that the area was once Senntisten, the capital of the nation of Zaros during the Second Age. During the quest, players find a Zarosian symbol and a tablet telling all mortals to tremble before the power of Zaros. This area is said to be part of a city three times bigger than Varrock which supposedly reached to Edgeville (then known as Paddewwa). It was destroyed during the God Wars and replaced by Saranthium, which was destroyed several hundred years before Avarrocka was established in 700 of the Fourth Age.

After earning 100 kudos in the Varrock Museum miniquest, players will have future access to an unreleased island north of Morytania. The barge to travel there is currently being built just north of the Dig Site. When the island of Anachronia was found, Mr. Mordaut was made overseer of building the barge during the Breaking the Storm event, and many adventurers were recruited to help build the boat.

For players who are doing or have completed The Dig Site quest, the north-west winch at the Dig Site provides access to the Digsite Dungeon. A rope must be used with the winch to enter the dungeon.

The Varrock Dig Site is located next to the Archaeology Guild. It is where players will complete the Archaeology tutorial. Players can check soil here as well as repair damaged artefacts. 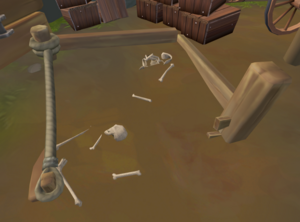 A buried skeleton in the Dig Site

Players can dig at Dig Site during and after the quest. The southern part of the Dig Site has several spots available for panning, using a panning tray.

Players can also pan at the south-east part of Dig Site with panning tray. They may get these items when panning:

In the south-east section of the Dig Site it is also possible to search the specimen tray with a specimen jar in the inventory. Doing so will have the player obtain the following:

The update history project is a work-in-progress – not all updates to this topic may be covered below. See here for how to help out!
Retrieved from ‘https://runescape.wiki/w/Varrock_Dig_Site?oldid=32866164’
Categories:
Hidden categories: