From the RuneScape Wiki, the wiki for all things RuneScape
Jump to navigation Jump to search
The Old School RuneScape Wiki also has an article on: osrsw:Brimhaven Dungeon

The Brimhaven Dungeon is an area of Dragonkin ruins[1] located south-west of Brimhaven on the member's portion of the island of Karamja. The dungeon is often visited for its large variety of monsters, and for elite clue scroll scans which tell the player to scan the dungeon.

In order to access the dungeon, players must pay 875 coins to Saniboch who guards the entrance to the dungeon. Saniboch will let players enter free of charge if the player has completed the Hard Karamja achievements.

While most of the dungeon's history is either lost or unknown, two Dactyl Dragonkin, Kerapac and Forcae would form what would eventually become the present-day Brimhaven Dungeon. The experiments performed in the dungeon resulted in the creation of metal dragons. The two Dactyl eventually got into a dispute over which dragon branch would be superior; Forcae argued that metallic dragons would be their solution, while Kerapac thought otherwise. Kerapac eventually left Forcae to move on his own experiments.

Forcae, intending to continue his project, stole several eggs from Kerapac and created the first few adamant dragons. While working, he would eventually be found by the Necrosyrtes, forcing him to abandon the laboratory and the other adamant dragons inside.

The dungeon would eventually fall into disrepair and many monsters began moving in along with the original draconic inhabitants. Vines covered many of the passageways and could only be cut down by relatively skilled woodcutters.

Sometime during the Fifth Age, the Wise Old Man presumably explored the dungeon when very few dared to do. After exploring the dungeon, he met one of the Karamjan families and told them to construct a hut around the entrance and charge anyone who wanted to enter. Saniboch, a descendant of this family, continues the tradition of charging anyone who wishes to enter the dungeon.

Once inside, players need any hatchet to hack their way through hanging vines at various points in the dungeon. A hatchet on the tool belt will work. Players may grab a bronze hatchet from the table of the pirate pub to the east of the entrance. They can also be purchased at the general store to the south of the dungeon. Some, but not all, vines require 10, 27 and 34 woodcutting to cut through.

There are also stepping stones in the dungeon that require level 12 Agility to pass.

There is a level 80 resource dungeon containing iron, steel and mithril dragons (the latter of which is only available with completion of the Daemonheim achievements), and a hammer.

Many areas are infested with aggressive level 35 wild dogs. They have poor drops (just bones and rarely charms) and will pile low-levelled players. They are very rarely slain, except for obtaining bones for Bones to Bananas or Bones to Peaches. They are non-aggressive to players with a combat level of 75 or higher. Since most players that enter the dungeon have sufficient combat experience to make them non-aggressive, they are very rarely considered dangerous.

The Adamant dragon dungeon can be accessed by the room that connects the large moss/fire giant room to the black demons. 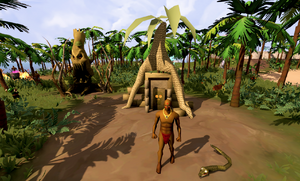 The entrance to Brimhaven Dungeon

The dungeon is located a short distance north-west of the Karamja lodestone. There are also other ways to get there, which are generally obsolete since the introduction of the lodestone:

The nearest bank, although the quest Shilo Village and 10 extra coins are required, is Shilo Village Bank by using Hajedy's cart. However, one would normally teleport to a bank and return via the lodestone.

The metal dragons are popular since they drop both dragon platelegs and dragon plateskirts, and the iron dragons and steel dragons also drop the very rare Draconic visage. 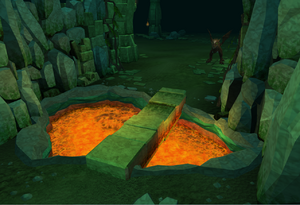 As noted above, the Karamja gloves 3, a reward from the Hard achievements, give free access to the dungeon. In addition, the Karamja gloves 4, a reward from the Elite achievements, give access to a one-way shortcut to the red dragons, and allow the wearer to deal double damage to wild dogs in the dungeon. The shortcut is in the room to the south, after passing the first roots. You will need to be wearing the gloves in order to jump down the hole.