From the RuneScape Wiki, the wiki for all things RuneScape
Jump to navigation Jump to search
The Old School RuneScape Wiki also has an article on: osrsw:Jas
Jas? (edit) 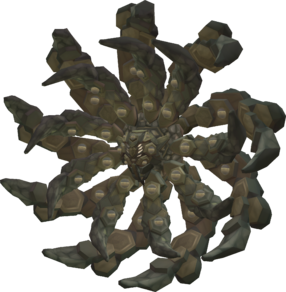 Jas was the oldest and most powerful of the Elder Gods, the ancient beings responsible for the creation of the universe, including Gielinor itself.[1][2] She is described by a TokHaar-Hok as "time, and so time passes. She is sand, and so there is desert."[3] It has been said that the Elder Gods do not specifically represent an element or aspect, but Jas is most aligned with progression and time, and also has an association with sand and air. In addition to the roles she played in shaping the universe, Jas is specifically responsible for creating almost all of the Elder Artefacts using the Stone of Jas, the Catalyst, the first artefact and the one that "most purely expressed her power," and one that has played a prominent role in Gielinor's history.[2] She presumably met her end when she was attacked by a shadow leviathan from Erebus, and the dragonkin Kerapac sacrificed himself by using The Needle against her in the Sixth Age.

Jas and the others were born on Freneskae and enacted The Great Revision in which they consumed the anima of all other planets apart from the one they were born in to replenish themselves. Mah was thought stillborn by the others, forcing Jas to create the Stone of Jas in an attempt to duplicate Mah's power as they left Freneskae to create and destroy planets. The Stone of Jas was created by Jas from her own egg; in doing so, she forfeited her own existence starting at the next cycle of the universe.[4][5][6]

Initially believing that there was no life at all, Jas and the others unknowingly destroyed the dragonkin homeworld. The dragonkin survivors fled to Orthen, with one of them, Kerapac, desiring revenge on the Elder Gods for destroying their homeworld. He created a device that generated shadow anima, which is highly toxic to the Elder Gods. This in turn alerted the Elder Gods of the danger he posed. Jas personally appeared and destroyed Orthen and the other dragonkin cities in response. Seeing mortal life for the first time, and that they desired her kind's power, she bound the Dragonkin to the Stone, so that they would no longer desire it.[7]

The Elder Gods shaped many worlds throughout the universe, each time improving their designs with the assistance of the Elder Artefacts, including the Elder Kiln. After creating Gielinor, meant to be their final and most perfect creation, the Elder Gods "lay down upon their perfect world" and "[spoke] no more [to the TokHaar-Hok]." This suggests that the Elder Gods did not depart from Gielinor after creating it, but instead remain on it. Her Elder chronicle is found on the Ullek cliffs, suggesting that she is either underneath or is the Ullek cliffs.

Jas awoke sometime before the events of Missing, Presumed Death. After this happened, Sliske met her by unspecified means. Sliske managed to bargain a deal with Jas, suggesting that she should study the young Gods, but telling her that he needed the Stone to bring them together[8]. Jas informed Sliske about additional details of the Staff of Armadyl, which she considered quite useful. She explained that the staff could reveal connections between things, so Sliske used it to reveal Strisath's link to the Stone, caused by the curse, to discover its location[9]. After this, she grew impatient and asked if the Catalyst would bring the gods to her. Sliske assured her that it would be the case, saying it was like a siren song, but Jas didn't care and just told him to make it happen.

In Heart of Stone, the World Guardian visited the Ullek cliffs again, and met with JasKra, Jas's mouthpiece, whom the World Guardian and Kipple convinced that they are not working with Xenia by displaying a series of memories to it proving this point. At the end of this quest, the Prehistoric abyssal declared that Jas, along with the other Elder Gods on Gielinor (Ful, Bik and Wen), were beginning to wake up due to Xenia draining Gielinor's anima into the abyss.

Sliske eventually hosted his "endgame", creating a massive labyrinth which began draining divinity from the gods as soon as they stepped inside. The young gods, unaware that Jas had awoken, simply believed it to be some of Sliske's tricks. Upon defeating Sliske, the World Guardian soon found themselves in an unknown cavern with Zaros and Seren, Mah's divine creations. She spoke with the World Guardian using constructs, as they would have been obliterated by her normal voice otherwise.

Zaros requested that they make him one of them, showing them Mah's elder core as proof of her demise, but Jas refused, as he could not create life. Zaros believed that the nihil were enough, but Jas reiterated this by stating that he had to create life from nothing, which she believed meant herself and the other Elder Gods, much to Zaros's anger as both he and Seren left.

Jas soon focused her attention on the World Guardian, asking them why they killed her agent. Given a large variety of responses, mainly those related to violence, Jas concluded that mortal life was unexpected and dangerous, deciding to ask her sisters if life should exist. The World Guardian was alarmed by this, as their awakening would destroy Gielinor, but Jas reassured them that they would not physically do so, instead telepathically communing with each other. She then gave them an ultimatum of her own; prove mortal life deserved to exist, or she and her sisters would fully awaken and begin the Great Revision.

The World Guardian, knowing of Jas' influence on Gielinor, wished to ask her several questions, but Jas stated that she would only answer one. If asked about the Elder Artefacts, she told them about the other Elder Artefacts that were unknown to the inhabitants of Gielinor - the Codex, the Template, the Hammer and the Needle, of which the Codex and Needle were discovered sometime later. If asked about what she thought of the others, she saw Zaros as a child, Seren as something that could be more, the lesser gods as harmless, the Dragonkin as a mistake, and the destruction of her Stone as her sacrifice. If asked about why life such as humans existed, Jas stated that she did not know.

After answering their question, Jas dismissed them, reminding them of her ultimatum.

Following Kerapac's betrayal of the group to destroy Gielinor to prevent the Elder Gods from ever awakening, Seren requested an audience with Jas, who granted it. Jas met with the World Guardian, revealing that she and the others knew of Kerapac's attempt to kill them with shadow anima. They did not act immediately however as an act of mercy, as physical intervention would cause collateral damage and her contract with the World Guardian was still active. However, she had also told them it was only a matter of time before they were forced to do so.

Following the theft of the eggs from the Elder Halls by Azzanadra in a bid to stop the Great Revision, Jas became enraged with her sisters. Despite forfeiting her own life in the next cycle, she assisted her younger siblings nonetheless. Jas, along with Bik and Wen, did not have any forces of their own to call upon, but remembering that Kerapac was bound to her, immediately brought him to her and ordered him to reclaim the stolen eggs, gifting him the Siphon, Needle and Mirror to do so, knowing that he would be unable to use them against her. When Kerapac asked what she would give him if he complied, Jas evaded the answer and dismissed him.

Despite Kerapac's efforts, he would be defeated by the World Guardian. Jas refused to let him die and simply teleported him away to safety, disappointed in his performance.

With the departure of the Zamorakians from the war effort, Jas and her sisters were on the cusp of victory. However, in a last ditch attempt to spare the lives of the unborn elder gods when their deaths seemed like the only option left, Seren departed from the cathedral with the eggs and headed to Freneskae. Adrasteia, Moia, Hannibus, Vicendithas and the World Guardian pursued her through the world gate, while Jas sent Kerapac after them to intercept and reclaim the eggs. However, unbeknownst to her, the group had managed to convince Kerapac to defy Jas when the moment was right as she had not given any further orders to him regarding the eggs. After the group managed to find Seren and the eggs in the Elder Halls of Freneskae, the second, unconfined Shadow Breach had arrived at the Cradle, ravenous for the eggs. Kerapac arrived on Freneskae shortly afterwards with the Needle, with Jas herself following behind, decreeing that mortal life was to be no more. However, before Jas could kill them all, Kerapac defied Jas and used the Needle's power to reverse time and give the World Guardian time to enter the Dark Portal and search Erebus for a solution.

After many trips in and out of Erebus, the World Guardian had managed to find an idol that lured a shadow leviathan through the Shadow Breach, which proceeded to attack Jas just as she broke through the Needle's effects. While she was distracted, Kerapac defied Jas once again and attacked her with both the Needle and the Staff of Armadyl to ensure that she would not escape this encounter with her life, in spite of the pain she inflicted towards him for the betrayal. Jas was defeated, and the shadow leviathan dragged her body back through the portal into Erebus, seemingly to her demise. Kerapac was unable to escape being dragged into Erebus himself, but knowing that by his own hand he had finally defied and defeated the Elder God that had caused him and his people so much suffering, he gladly accepted his fate.

Like the other Elder Gods, Jas can create life and entire planets out of sacred clay. The Elder Gods also formed stars.[10] In addition, she created several Elder Artefacts, which themselves are powerful enough to cause mortals to ascend to godhood. Upon hatching from her egg, like the other Elders, she was capable of instantly draining all nearby life and turning an entire planet into a dead husk within minutes in order to feed on the anima.[11]

She is capable of binding entire species to Elder Artefacts. Additionally, she can manipulate their pain receptors and increase their reflexes, speed, and magical aptitude with the amount of pain they feel; this was done to the dragonkin race to better defend the Stone of Jas.[12]

She can teleport other beings to and away from her presence against their will, which is how she summoned the World Guardian before her and dismissed them after their conversation was over, overpowering Guthix's blessing against god magic. She would also be capable of killing the World Guardian in an instant after being insulted, atomising them.[13] Additionally, Jas speaking using her own voice would obliterate Zaros, Seren, and the World Guardian, which is why it was necessary for her to create Voices of Jas to ensure that any communication could occur.[14]

She can simultaneously fire energy beams from her eyes, which were powerful enough to destroy the city of Orthen.[15][16]