Grenwalls are hunter creatures requiring a Hunter level of 77 to catch. The only places where one can catch these creatures are in the forests of Isafdar, inside the Gorajo resource dungeon, on Anachronia, and in the grenwall portal area (which requires a grenwall quota ticket and access to Tirannwn).

They are caught using box traps which must be baited with raw pawya meat. The bait will be consumed on a failed catch; however, there is a chance that you may receive it back on a successful catch. Upon completion of the medium Tirannwn Tasks, bait is no longer needed to catch grenwalls.

When caught, they give 605 Hunter experience and drop 18-21 grenwall spikes, which can be used to make extreme ranging potions or used as an alternative to arrow shafts. They may also drop an assortment of grimy herbs, from ranarr to dwarf weed (excluding spirit weed, wergali, and snapdragon). It can be advantageous to bring a bonecrusher for easy prayer experience and a herbicide for unwanted herbs. Alternatively, bringing a Herb bag can be helpful for storing the collected herbs.

Grenwalls can be found in four locations:

An illustration of where to place box traps

If the player has not completed the Tirannwn tasks, they can hunt grenwalls in combination with pawyas. Players should take a fruit bat familiar with at least 100 fruitfall scrolls to a hunter spot that contains both grenwalls and pawyas. Surround a grenwall spawn location with three traps, all baited with raw pawya meat, and use the remaining two, baited with papayas, to hunt pawyas. Continually cast fruitfall to replenish the supply of papayas and if necessary bait 3 traps, instead of two, with papayas if pawya meat supplies run low. Bank at Lletya when you have a full inventory of herbs, or the nearby deposit box (present only after Deadliest Catch). It is possible to get papaya tree seeds as loot from Pawyas, though this is rare.

A second method involves buying raw pawya meat and using a banking method to run trips between Lletya and grenwall locations. Using this method you can achieve a higher catch rate per hour. Using a banking method allows you to use a level boosting familiar such as an Arctic Bear or a beast of burden, such as a war tortoise or pack yak. A player would start at Lletya with 5 box traps, 1 crystal teleport seed, their grenwall spike stack, and possibly a replacement pouch, then fill the remaining inventory space with raw pawya meat.

With the completion of the Medium Tirannwn task set, the player unlocks the ability to catch Grenwalls without the need for bait. This makes training at the locations mentioned in Methods 1 and 2 much more simple, and combined with the use of a bonecrusher and herbicide, eliminates the need for banking all-together. If the player wishes to save the herbs, it is recommended to bring Signs of the Porter and not use herbicide; keep in mind that this will also bank the raw pawya meat.

Access to a private hunting area is one of the possible rewards for participating in Big Chinchompa. The maximum amount of points earned per game is 1500, and two games can be completed per day. 300 Grenwall quota tickets can be earned per day by spending 3000 Big Chinchompa reward points at either Nyriki Tapio or Mieliki Tapio's shop. The player is required to have access to Tirannwn in order to enter the Grenwall portal, as well as a Grenwall ticket for every Grenwall caught.

The portal is close to a bank, so it takes 2-3 minutes to restock on Raw pawya meat, if the player has not completed the medium Tirannwn tasks. With the medium tasks completed, a player may gain around 310,000 Hunter experience an hour from hunting Grenwall within a private hunter area. 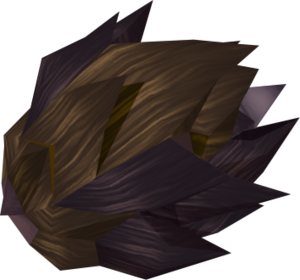