From the RuneScape Wiki, the wiki for all things RuneScape
Jump to navigation Jump to search
IrwinssonIrwinsson (rex rider)? (edit) 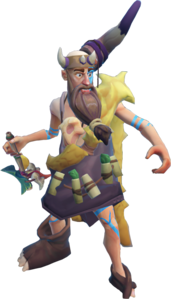 Irwinsson Siglison is a hunter master found south of the lodestone on Anachronia. He runs the Hunter Mark Shop and Irwinsson's Hunter Supplies.

He originally came from Rellekka, and is the son of Sigli the Huntsman, who is a huntsman in Rellekka. Sigli's parenting involved little praise, which led Irwinsson to believe that Sigli didn't care for him. Irwinsson had a few drinks with Mark Brodie, a Varrock Museum employee who informed him about Fossil Island. The island greatly caught his attention and the only thing that went through his mind was visiting the island.

With the problems with his father getting worse, Irwinsson eventually left Rellekka for good and began securing funds to acquire a boat, doing so by catching whatever he ran into and selling his catch to passing adventurers. Eventually he opted out of a home and rented a room above a pub before becoming self-sufficient, catching and cooking his own food to speed up the process. Though he bought a damaged boat, he did not mind the hard work and eventually made it seaworthy before buying all the supplies he believed he would need.

Now ready, Irwinsson set sail to the island - while sunbathing on the deck of his boat, he heard a loud boom and saw a figure flying overhead, though he was unable to identify it. After more sailing, he saw the outline of the island, but a storm suddenly emerged. He immediately knew this wasn't natural weather, but was forced to sail on as he would have run out of supplies if he attempted to sail back to civilisation. Irwinsson believed he would die the failure he was, but hoped he would be given a proper send-off.

However, Irwinsson found himself alive, although shipwrecked on the shore; he had been knocked out during the storm, his head smashing into a table and doing a "number" on his face. He was fearful for his life due to the massive beasts roaming the island, but managed to survive using his hunting skills to catch his prey, create a blowpipe from their remains and set up camp in the central ruins. He began seeing visions and voices soon after, believing it to be caused by the water, but despite this he had to drink it to survive.

Several weeks later (though years in his mind), Irwinsson came upon a group exploring the island and guided them to safety after they are ambushed by a Pavosaurus rex, taking them to his shelter in the middle of the island that was safe from the dinosaurs and plants. The group then began to set up a base camp in the ruins, using its safety to build up for future preparations.

When Sigli discovered that his son still lived, he bade the messenger deliver a specially crafted greatbow to his son. Despite the apparent animosity, Irwinsson considered Sigli to be his idol and Sigli only wanted what was best for Irwinsson. Delivering the greatbow completes the Father and Son achievement.

During the achievement, A New Direction, players help Irwinsson reunite with his beloved compass.

Ranch Out of Time[edit | edit source]

Irwinsson may occasionally appear at the Ranch Out of Time on Anachronia. He may be sold pavosaurus dinosaurs in exchange for beans. As a large-sized animal buyer, he will appear or renew his order for pavosaurus rex dinosaurs every three days and purchase up to 6 animals before leaving, unless the player is at least 'Senior Master Farmer' rank in the farming reputation system; then he will buy up to 12.

Transcripts Irwinsson is the author or co-author of: