From the RuneScape Wiki, the wiki for all things RuneScape
Jump to: navigation, search
Not to be confused with Shadow enigma.

Kerapac is depicted unveiling his shadow anima device to the dragonkin.

Shadow anima, also known as anathema, is a type of energy or anima that is toxic to the Elder Gods,[1] and deters other gods.[2] It is the primary source of anima that exists in Erebus and the depths of the Shadow Realm.

Mortals subjected to shadow anima without protection would show a various plethora of effects based on how intense the shadow anima is. Light to medium quantities would disorient them to the point that they couldn't stand, and has a very cold, dead feeling to it. Dense quantities would choke the life out of them in seconds.[3]

On the other hand, beings that thrived on shadow anima require it to live. Without a sufficient source of shadow anima, they would either die or fall into a comatose state.

Like normal anima, an enormous degree of shadow anima is capable of ascending beings into godhood. However, exposure to high radiation of shadow anima can be fatal in most cases, as seen during the Battle for the Monolith. It is implied that Xau-Tak and Raksha are sorts of gods who draw on shadow anima for power.

As seen during Desperate Measures, it is possible to convert anima into shadow anima with certain devices. It remains unknown if shadow anima can be converted into normal anima. 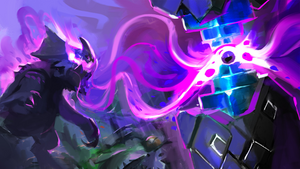 Rakhsa transformed by shadow anima from the Codex.

Shadow anima has existed just as long as its light counterpart. The Elder Gods found shadow anima to be extremely toxic and labeled it as anathema. To stop the flow of shadow anima from killing them, they created the the Codex to seal the Shadow Breaches, which are described by Guthix as one of the three major threats to the current universe.

The Codex ensured that very little, if any shadow anima, was able to leak onto Gielinor. The TokHaar, creations of Ful, were instructed on how to deal with shadow anima threats should they ever occur, but because the amount was either minute or non-existent at the time, they never had to deal with it.

A long time ago, when the Dragonkin captured Raksha, the Dactyl dragonkin Kerapac was highly intrigued by Raksha, a special shadow colossus. It was because of Raksha that Kerapac learned of the existence of shadow anima. Using this knowledge he built a device capable of creating shadow anima using regular anima tapped directly from Gielinor's animasphere, believing that the dragonkin could use it as a source of limitless energy to bring prosperity to their civilization and match the power of the Elder Gods. However, this only provoked their retaliation: in response to Kerapac's device, the Elder Gods destroyed Orthen and enslaved the dragonkin, binding them to the Stone of Jas. 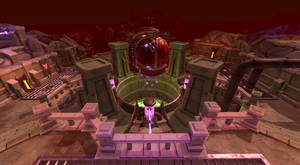 The device Kerapac used to generate shadow anima on Anachronia.

According to Charos, when Guthix made the adventurer the World Guardian, he also infused their soul with a carefully constructed enchantment of shadow anima, which is the reason why the gods cannot directly affect the adventurer without their express permission, as the shadow anima deters them.[2][6] However, the gods are still capable of indirectly manipulating them, albeit with great difficulty.

The following takes place during Raksha, the Shadow Colossus (miniquest).

After Kerapac's plot was foiled, Seren informed the World Guardian that while Kerapac did not make enough shadow anima to kill the current Elder Gods, it was enough to stir their young. She warned them that a second dose of equal or greater amount would rouse them into hatching early.

Meanwhile, Zaros discovered Raksha's prison and wished to take a vat of shadow anima that was keeping the massive beast in check, despite his warden's insistence not to. The World Guardian arrived soon after. Zaros, confident they could take the beast down, left with the vat in tow, stirring the beast into action. Fortunately for Varanus, the World Guardian was able to subdue Raksha after a long fight.

Influx from the source[edit | edit source]

The following takes place during Battle of the Monolith (miniquest) and City of Senntisten.

Secretly, Zaros deemed Gielinor a lost cause and decided to head to Erebus, the universe on the other side past the Shadow Breach. The anima emitting from Erebus was too toxic for even Zaros to handle, which was why he claimed the vat of shadow anima from Raksha's prison in the first place; to protect himself. Zaros used his powers to open the Codex, forcing the breach open. The creatures of Erebus were quick to notice the opening and proceeded to invade Gielinor. 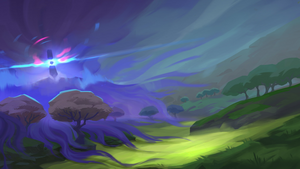 Despite the strengths of the alliance, the shadow creatures proved to be too strong for them to handle, with Saradomin and Nex struggling against a particularly large shadow behemoth, who was simply being staggered by their attacks. They were able to push through the initial defences, but when the World Guardian informed the TokHaar of the situation, the creatures were repulsed and the Codex was secured. Char, overconfident in their victory, blew the Frostenhorn near the Codex, amplifying the residual shadow anima around it, dragging her into Erebus. Azzanadra then sealed the Codex, but the shadow anima ended up forcibly ascending him into a god in the process.

The TokHaar meanwhile, saw the damage wrought by the surface dwellers' carelessness. Seeing that too much shadow anima had leaked into Gielinor, they deemed that everything would have to be dismantled and began attacking their former allies. Fortunately, they were repulsed too, now that the surface dwellers were able to fight on better terms, since the shadow anima was fading away.

While the outpouring of shadow anima from Erebus has been stopped, it agitated the eggs of the Elder Gods, bringing them on the verge of hatching and forcing the World Guardian and their allies to take direct action.[7][8][9] Working with Azzanadra they moved the eggs from the Elder Halls to the cathedral in newly uncovered part of Senntisten and staged their defence against the inevitable assault from the Elders. Absorbing the shadow anima from the Codex granted Azzanadra new insights on the nature of the substance. This led him to believe that ancient elements have a different source than most magic, which comes from the Elders, and that while combined, they could mimic the warding effect the shadow anima used by Kerapac had against the Elder Gods.[10]

When the Elder God Wen looked for servants to reclaim the stolen eggs, she found the glacor race on the frozen world Leng. To her dismay, she found that shadow anima had suffused both the planet and its denizens. Unwilling to make direct contact with the tainted beings, she opened the portals leading glacors to Senntisten and distanced herself from the ensuing destruction.[11] When asked about the source of his new power during the glacor onslaught, Azzanadra explained that it was not as uncommon as might be believed and that he did not feel any negative effects on his mind and body.[12]

Transcripts Shadow anima is mentioned in: