From the RuneScape Wiki, the wiki for all things RuneScape
< Anachronia
Jump to navigation Jump to search 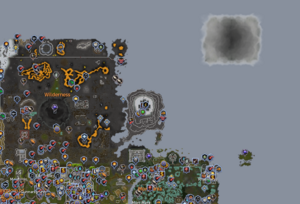 Obscured island on the World Map

Anachronia first appeared in the north-east corner of the World Map on 20 May 2019, obscured by clouds, together with the Varrock Dig Site update. With this update, Professor Tony, Seth Minas, and Associate Reiniger, located at the Varrock Dig Site, were also given dialogue where they discuss travelling to an island. The NPCs argue over their preferences for referring to the island as The Floating Land of Petrified Remains, TIFKAFI, and The Island Formerly Known as Fossil Island, while the player character may suggest Skull Island.

On 10 June 2019, players who were subscribed to emails from RuneScape received an email containing a link to a YouTube[1] video revealing more information about Big Game Hunter, the new Hunter method on the island.

Big Game Hunter will introduce nine new creatures, with requirements ranging from level 75 Hunter to level 96 Hunter. Players will first need to gather resources, trap and kill the creature, collect the loot, and then skin it. The skins can be used to create a new tier 75 tank Ranged armour. The creatures will also drop 3 different pieces which can be combined into a maul, a new hexhunter bow-like equivalent for melee, which will be more effective against creatures using Ranged, whereas the hexhunter bow is more effective against creatures which use Magic.

On 17 June 2019, players who were subscribed to emails from RuneScape received another email containing a link to the second behind the scenes video on YouTube[2] revealing more information.

On 24 June 2019, players who were subscribed to emails from RuneScape received another email containing a link to the third and final behind the scenes video on YouTube[4] revealing more information.

Breaking the Storm is a time-limited event, led by Mr. Mordaut, in which players can help to build the boat at the Varrock Dig Site to sail to Anachronia.