From the RuneScape Wiki, the wiki for all things RuneScape
Jump to navigation Jump to search
For the livestock creature, see Shadow jadinko (player-owned farm).
Shadow jadinko? (edit) 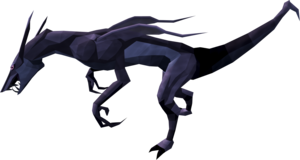 Shadow jadinkos can also be caught at the Herblore Habitat with a noose wand.

To attract this jadinko, players must plant a red vine blossom and build an abandoned house habitat.

To hunt this jadinko players are required to track by selecting the 'inspect' burrow, 'inspect' jungle plant and 'inspect' hole options in the area to the south of the farming section, using a noose wand to finally catch the jadinko by selecting the 'attack' bush option.

Note: If tracks lead to one of the holes, the jadinko will always appear in one of the other two holes. Search these other holes for continuation of the tracks.

The south-western burrow gives at least 2 possible tracks, but the north-eastern burrow always gives the same track, as follows:

At 81 hunter, the player can catch Shadow jadinkos with Marasamaw plants on Anachronia, giving 473 Hunter experience. They are located on the eastern side of the island, east of the Lampenfloras requiring 85 Agility (boostable) to make the trip shorter. Otherwise, longer walks can be used to reach the island and it will deplete the running energy.