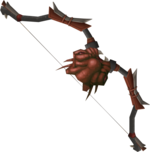 The strykebow is a level 85 shieldbow. It is made by combining a dark bow with a wyrm scalp, costing 10,966,825 coins; the newly created strykebow has an initial charge of 20%. The creation process can be undone, although only the wyrm scalp will be salvaged while the dark bows are lost. The intended ammunition for this bow are wild arrows, which are dropped by lava strykewyrms.

A fully-charged strykebow degrades for 60,000 charges of combat (a minimum duration of 10 hours of combat) before reverting to a wyrm scalp. It can be repaired by 20% by using a dark bow on it - a full recharge costs 3,403,905 coins.

This bow cannot be used for Barbarian Firemaking. It is the only shieldbow outside of Daemonheim to give a life point bonus.

The strykebow has a special attack called Deep Burn that requires 25% adrenaline to use. The player fires out an arrow that traps the opponent in a column of fire, dealing 50% (in PvP; 35% in PvM) of the stored damage that is released in the form of a rapid damage over time attack lasting for 2.4 seconds (5 hits total, 1 every 0.6 seconds).

The strykebow has a passive effect where it stores how much damage the player has received since initiating combat or since the bow was equipped — if the bow is unequipped or combat is terminated, all damage stored resets to 0.

The strykebow releases 40% of the damage stored in the form of a second arrow shot, inflicting up to a maximum of 10,000 damage, after every 15 "counters". Each successful ability used adds 1 to the counter while autoattacks add 3, so the strykebow unleashes the shot after 15 abilities, 5 autoattacks, or any combination thereof. Missed attacks do not add to the counter, and bleed abilities count as 1 ability used. At 25,000 damage stored, the bow's passive effect reaches the maximum damage it can deal.

The strykebow has diminishing returns to the amount of damage stored as stored damage increases. The multiplier starts at 400% and lowers to 200%, 100%, 50%, 10%, and eventually stops storing damage entirely at 80,000 total damage taken.

PvM and PvP damage use different thresholds when choosing which multiplier to use.

If the bow cannot store any more damage, the message Your strykebow is fully charged! will appear.

For example, if the strykebow currently has 20,000 stored damage, then 200% of PvM damage taken is stored while only 100% of PvP damage is stored.

This information has been compiled as part of the update history project. Some updates may not be included - see here for how to help out!
Retrieved from ‘https://runescape.wiki/w/Strykebow?oldid=35729897’
Categories:
Hidden categories: