From the RuneScape Wiki, the wiki for all things RuneScape
Jump to: navigation, search
The Old School RuneScape Wiki also has an article on: osrsw:Dragon spear
For other variants of this item, see corrupt.
Dragon spear? (edit)

The dragon spear is a spear made of dragon metal. This two-handed weapon can be wielded by members who have at least 60 Attack. It is an extremely rare drop from the rare drop table and from cremating vyrewatch. 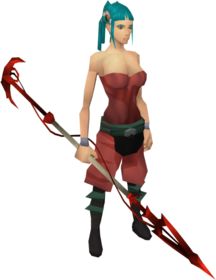