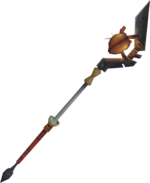 The staff of darkness is a two-handed staff that requires 85 Magic to wield. When a combat spell is cast with the staff, there is a chance that the staff will negate the rune cost for that spell. This is the same 12.5% (1/8) chance as its lesser counterpart, the staff of light. When the effect activates, the following message appears in the chat box: "Your spell draws its power completely from your weapon." Just like the staff of light, the staff of darkness can be used to cast the Slayer Dart spell, and is the highest tier weapon that can do so.

A staff of darkness is made by combining a staff of light with a wyrm heart, costing 37,034,499 coins; the newly created staff will have an initial charge of 50%. The creation process can be undone, although only the wyrm heart will be salvaged.

A fully-charged staff degrades for 60,000 charges of combat (a minimum duration of 10 hours of combat) before reverting to a wyrm heart. It can be repaired by 50% by using a staff of light on it - a full recharge costs 5,963,580 coins.

The staff can be combined with an augmentor to create an augmented staff of darkness.

The staff of darkness's special attack, Power of Darkness

The staff of darkness has a special attack called Power of Darkness, which uses 100% adrenaline. When used, all damage against the player is reduced by 25% and 25% of all damage is reflected back to the attacker for 20 seconds. The effect ends if you switch out your weapon. When the effect ends, the following message appears in the chat box: "The power of the darkness fades. Your resistance to attacks returns to normal."

This special attack has a 90 second cooldown before it can be used again. When the cooldown ends, the following message appears in the chat box: "You may once again call upon the power of darkness."

Note: the above crafting recipe is for the 50% charged staff of darkness. A second staff of light is needed after creation to fully charge it.