The Frozen Waste Plateau (also called Ice Plateau) is located in the north-west corner of the Wilderness. There are multiple ice warriors and ice giants throughout the plateau, making it and the Asgarnian Ice Dungeon the only locations where free players may fight them. In the members' area of the plateau, ice spiders can also be found roaming alongside them. Ice strykewyrms are also found on the plateau.

There are also several spawns of water runes, cosmic runes, and law runes.

The highest-level beacon of the Beacon Network is found in the members' part of the Frozen Waste Plateau. It requires level 92 Firemaking to light and has no keeper. 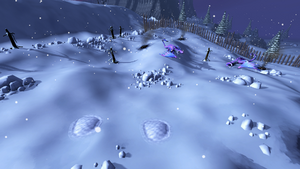 Another part of the plateau