An uncut sapphire is a gem used in Crafting and Fletching. An uncut sapphire can be crafted into a sapphire, requiring level 20 Crafting, yielding 50 Crafting experience. Uncut sapphires can be obtained from sedimentary and igneous geodes, dropped as loot from defeating monsters, and may by rewarded as a prize from many Distractions and Diversions.

Uncut sapphires may be mined from uncommon and Prifddinas gem rocks. Wall safes found in the Rogues' Den may be cracked at level 50 Thieving, awarding uncut sapphires occasionally. Uncut sapphires are a common reward of the Gnome Restaurant minigame and from managing Miscellania's kingdom. Uncut sapphires can also be found laying on the ground within the King Black Dragon Lair. 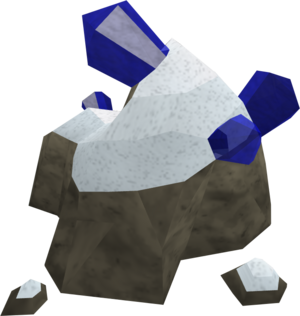