The official world for Community Divination Training is world 79 (P2P).

Divination is a gathering and manufacturing skill that was developed by humans shortly after the beginning of the Sixth Age. It involves gathering Guthix's residual life force, which is leaking throughout Gielinor. To do this, the players gather divine energy from wisps and then use this energy to make items such as portents, signs, and divine locations. 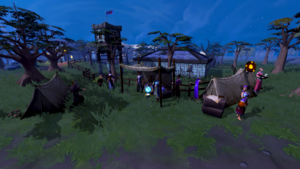 In the Year 169 of the Fifth Age, the Assassination of Guthix took place. In Year 1 of the Sixth Age, this resulted in the manifestation of wisps and the appearance of craters throughout Gielinor. As researched by May Stormbrewer, the wisps are a fusion of memories and divine energy. The memories are remnants of Guthix's life force, which hold his residual power within them and were expelled from Guthix after his death and thus spread throughout the world.

Divine energy is the result of the Edicts of Guthix, which were believed to be a physical barrier around the world which prevented the Gods from entering Gielinor. Upon Guthix's death, however, this barrier shattered and fell down to the surface. It is believed that the power of the shield is held within the divine energy. Divine energy and memories combined together and formed wisps.

Guthix's death also caused the various craters to open around Gielinor. It is highly speculated that the death of Guthix has damaged the world and that damage has manifested itself as the craters. It is probable that Guthix's death has rendered a great imbalance within Gielinor, and so the life force of the world (Anima Mundi) is now "bleeding" due to this imbalance. The wisps gather around these craters as they are attracted to this life force because this is one of the powers that Guthix used to become so powerful. This same force now saturates the wisps as his memories.

Those who study Divination west of the Lumbridge Crater, as well as many adventurers, are trying to return the memories to the various craters as it seems that giving Guthix's life force back to Gielinor heals it to some extent, although it is unknown whether this ritual will be able to fully restore the Anima Mundi.

It is unknown at the moment if the world can be repaired without Guthix. It has been speculated that the life force of Gielinor may merely continue to leak from the craters, resulting in further degradation of the world. The consequences of such damage are unknown but likely catastrophic. 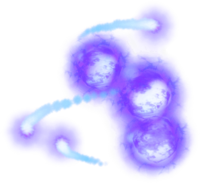 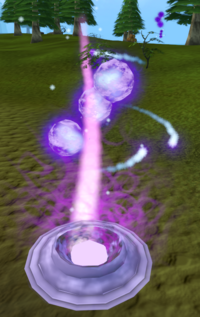 To learn about the Divination skill and begin training, players can talk to Orla Fairweather in the Divination Camp south of the Draynor Village jail. She will say that there are many wisps located around Gielinor from which the player can gather memories. The player may then convert the memories into Divination experience or energy to create products, such as signs or portents.

To harvest energy, a player must first activate a wisp. This is done by left-clicking the wisp to "harvest", at which point it will turn into the corresponding spring, and the player will begin harvesting memories of the same tier for minimal Divination experience. Every harvest provides the player a number of energy of the spring's type, depending on the player's level, and a good but not 100% chance of harvesting that type of memory. There is also a small chance that the player will harvest an enriched memory, which provides double the experience of harvesting a normal memory.

There is a blue bar above each wisp as it is being harvested allowing you to see how much time is left. With one person harvesting from a wisp the bar will begin at 50% filled. However, increasing the amount of people harvesting from the spring (up to five) will increase its average duration.

The number of energies gained when harvesting a spring changes based on level. Energy is harvested from springs regardless of whether the player successfully gets a memory. From levels 1 to 54, the player will only harvest one energy at a time. At levels 55 through 74, this is increased to two energies per harvest. At levels 75 and beyond, the player will gain three energies every harvest.

Around once per minute, each player has a chance that a chronicle fragment will spawn when collecting from wisps, with approximately a 1 in 25 chance. When a Chronicle fragment spawns, it is temporarily instanced so that only the player for whom it spawned may see it. After a short while, other players will be able to catch it. Catching a Chronicle fragment earns the player Hunter experience. Catching ten of these will grant additional divination experience when given to May Stormbrewer. More experience will be granted if they are offered at Guthix's shrine. Alternatively, players can enable the Abyssal Transit buff by completing or prestiging Memorial to Guthix, which will enable the ability to offer chronicle fragments from the inventory. Up to 30 chronicle fragments can be held by the player at one time if the player hasn't finished the Memorial to Guthix tutorial, although the spawn rate will be reduced after obtaining ten. The ten fragments do not need to be in the player's inventory to turn in to May.

Chronicle fragments now have an enriched version if you collect it quickly. They can also be used to empower the rift enabling an enriched wisp to spawn once charged to 100%.

Note: The Chronicle Fragment spawn rate described here was the rate at the release of the skill; updates have since greatly reduced their appearance.

In addition to regular wisps, rare, enriched wisps spawn when chronicle fragments are used to empower the rift to 100%. These activate into enriched springs, which always give double the experience on harvesting energy compared to regular springs and guarantee that whenever a memory is harvested, it will be an enriched one. In addition, any of the first four people to start harvesting from it who have at least one normal (not enriched) memory of the same type in their inventory will have one converted into an enriched memory. This makes the enriched pool last a little bit longer. If this happens, the player will get a message in their chatbox (does not appear if game messages are filtered).

Time based "buff" rewarded to players in the surrounding area for contributing energy to the well. Grants the following effects:

The exact duration of a spring depends on several boosts, calculated in this order:

Thus with all boosts, the maximum possible duration is 251 ticks (2 minutes 30.6 seconds) normally and 375 ticks (3 minutes 45 seconds) during a limited time boost.

For enriched springs, the calculation is a little different:

The Divination cape and fading memories do not affect enriched springs. The maximum time is 107 ticks (1 minutes 4.2 seconds) normally and 214 ticks (2 minutes 8.4 seconds) during a limited time boost.

All boosts (other than the multiple players for enriched) only apply to the player that activated the wisp and only apply to standard wisps - quest-only wisps and ancestral springs are not affected. 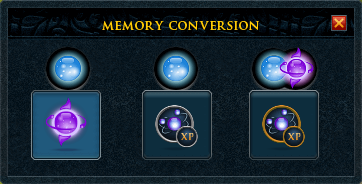 The memories (both standard and enriched) are to be deposited in the energy rifts nearby. There are 3 options with depositing at the rift:

These options can be activated using keys 1, 2, or 3 on the keyboard. 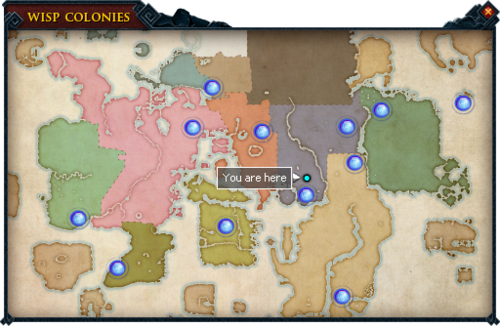 A map showing the locations of all wisp colonies on Gielinor.

There are many energy rifts located around Gielinor and even one on Freneskae, all of which require a higher Divination level than others.

Note that 10% bonus experience can be earned from converting with the appropriate boon. See the respective wisp pages linked for information on the fastest means of travel. A player may have all boons (which they have the level to create) active at one time.

Players can train Divination at the Wilderness Volcano at any level. The experience and energy gained vary based on the player's level.

A player creating a boon

Boons are permanent, single-use items that give 10% more experience when converting memories of a given tier. Only one of each tier can be used, but once it is used, the effect lasts forever. They are made by using a certain amount of energy of either the same tier or one tier below the boon being made.

Portents are single-use items carried in the backpack that activate automatically when certain conditions are met. There are four types: restoration, item protection, life, and passage (portent of passage is only available in Daemonheim - see also Dungeoneering/Divination).

Signs are single-use items carried in the pocket that activate automatically when certain conditions are met. There are five types: respite, porter, item protection, life, and death.

Players often like to place divine locations in popular places such as the Grand Exchange or world 2 Burthorpe so that other players have the opportunity to use their divine location as well.

Locators are useful devices for players to teleport to random resource locations without walking. These are created via the use of energies and divine locations of a specific tier. There are four types:

Guthixian Cache requires the player to hop into an energy rift, found at any of the wisp colonies (except the Pale wisp colony) for 10 minutes every hour, to collect memories of Guthix.

A player wearing a Divination cape and performing the Skillcape emote.

Divination boosts can be used to create Portents, Signs, and Divine locations and to Transmute items that the player does not have the Divination level to make. Boosts can also be used in Guthixian Caches and the Hall of Memories and to make Boons and collect from springs that the player lacks the required level for.

This boost cannot be used to start miniquests in the Arc region. They also have no effect on energy gained per harvest, meaning a player cannot, for instance, boost their level from 73 to 75 and gather 3 instead of 2 energy per harvest. The following items can be used to boost Divination level.

The Divination cape can be bought from Orla Fairweather for 99,000 coins upon achieving level 99 in Divination.  The cape's perk gives non-enriched wisps a fixed 30 second lifespan when harvested from unless combined with the Ethereal Connection buff from the Memorial to Guthix which boosts the duration further by 10 seconds to a total of 40 seconds.

Like all skills, there is a skilling pet obtainable from training this skill. For the Divination skill, the pet is called Willow.

The skill was first announced in an IGN article[1] on 3 May 2013, which was later corroborated on 6 May by a Jagex Moderator (Mod Seven) on Twitter[2] to be the new skill.

The June 2013 BTS contained some fairly major hints on the matter.

It was revealed that Divination would be released in August 2013 shortly after the release of RuneScape 3.[4]

When asked about the mechanics of Divination as compared to Fishing and Mining, Mod Mark stated:

In the same 'Around the Campfire' Q&A BTS Video Mod Mark stated that Jagex planned to release a few weeks after RS3 but no confirmed date has been given. It was also confirmed that there will not be a quest to introduce the skill like there was with the release of Summoning.[5] Mod Mark confirmed that Divination would not be available to free players outside of the usual level 5 trial. He also confirmed that Divination, unlike Dungeoneering, would not be trainable up to level 120.[6] A poll for the final skillcape design was started on 25 July.[7]

On 1 August 2013 it was confirmed while training the skill, players would collect divine energy from Wisps, which can be used to create new pocket or inventory items that activate under certain conditions and provide certain benefits such as preventing a killing blow being dealt to the player.[8]

On 6 August 2013, the skill cape option 6 was confirmed out of the poll results.