Beefy Bill, real name William Whitebred, is a merchant in the cow fields north of the windmill near Lumbridge. He is the proprietor of a general store called Beefy Bill's Supplies. He can also transport flour, cowhides, and raw beef to the bank, charging a 10% commission (rounded up), or for free if charmed with an activated ring of charos. To access this feature, one must either directly talk to Beefy Bill or use the respective items on him; there is no right-click Bank option. The most efficient method of banking with him is for the player to have at least 10 of the items he banks in their inventory so they can bank 9 and Beefy Bill will only take one.

To find him, players have to follow the road north from Lumbridge (not crossing the river) and keep going as it leads west. Players then have to go north of Mill Lane Mill into the cow pen area. He stands next to a cart full of meat. If the Varrock lodestone has been unlocked, you can walk south from it instead.

Beefy Bill was added when gnomecopter tours were removed from the game, to replace the bank boxes and general shop that they contained. Along with replacing the gnomecopter tours, he has also replaced them in the medium Lumbridge achievements as the last achievement on the list. 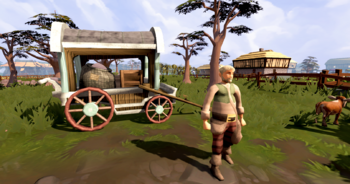 Beefy Bill standing next to his wagon.