The 2021 Easter event, also called the Spring Festival, was an Easter event hosted by Thaerisk Cemphier and his druid organisation of Crux Eqal. It added a new festival area west of the Exam Centre, which will be updated over the coming years. It featured XP buffs between 2% and 20% (depending on community progress) in the area, as well as several community benefits and improved benefits of catching green, white, and yellow Guthixian butterflies. Green and white butterflies gave direct experience while yellow butterflies give bonus experience to one of the player's lower skills, which was determined similarly as in Tears of Guthix.

It was possible to teleport to the event area through the Event interface.

There were three activities in the area, all of which granted Spring Tokens. The first 5,000 tokens per day were earned at a doubled rate. It was also possible to get drops of 10 oddments while participating in the activities. A temporary bank chest could also be found in the area.

Ironmen could take part and gain experience during the event, however would not benefit from the experience boosts rewards from the community engagement.

This activity was run by Athletix. Players could celebrate at the central Druidic Stone which caused them to walk around it for Agility or Prayer experience in either clockwise or anti-clockwise direction. The player would use either the Conga Walk (Agility) or the Loved Up Walk (Prayer) animation depending on which kind of XP they were receiving.

The correct direction to walk alternated every minute, and Athletix would say I have re-calculated! We must go clockwise/anti-clockwise! Walking in the wrong direction would award significantly less experience.

Welcome To The Easter Fete would play while participating in this activity.

This activity was run by Kaqemeex. Players brewed at one of three cauldrons for either Herblore or Cooking experience.

Each icon would visually start off as a simple log, but after enough carving they would begin to take shape. Icons went from unstarted, to started, and finally complete. After this they would reset back to unstarted. Each icon took 250 skilling actions to advance a full visual stage, taking 12.5 minutes of continuous carving from a single player. 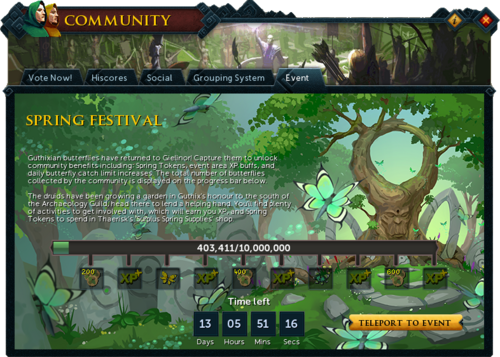 During the event, catching the Guthixian butterflies would change the look of the Tree of Balance, and added to a global counter. The tree will also change with the northern hemisphere seasons. The current number of butterflies caught could be checked from either the Community Event interface or by speaking with the Tree of Balance (who would also tell the player their personal butterfly count).

For each million Guthixian butterflies caught up to ten million, a new reward was unlocked.

Spring Tokens were received when participating in any of the event activities. Each activity granted 2 tokens every 3 seconds if following the spotlight, or 1 token every 3 seconds if not. These rates were doubled for the first 5,000 tokens each day. If following the spotlights, it required a little over one hour to receive the first 5,000 tokens each day.

Spring tokens were used to buy rewards from Thaerisk Cemphier.