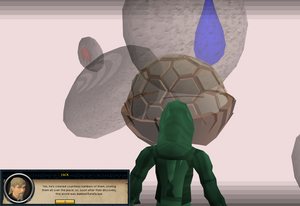 Guthix creating runes with the Stone of Jas, as seen in Meeting history. 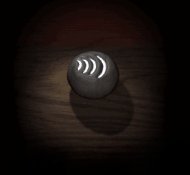 A piece of concept art of an air rune, as shown in the God letters.

Runes are small, weightless stones that allow players to cast spells using the Magic skill. Runes can be either bought from the various Rune shops found across RuneScape, traded with other players, purchased on the Grand Exchange, created from rune essence or pure essence through the Runecrafting skill, obtained from the Runecrafting Guild, procured from drops by killing monsters, or picked up from spawns on the ground.

The elemental runes (air, water, earth and fire, named after the Greek classical elements) can be substituted for by wielding a respective elemental staff, battlestaff or mystic staff. The only times an elemental staff cannot be used to substitute for runes is when setting up a portal in the Portal Chamber of a player-owned house, or when charging a Polypore staff.

Runes come in a number of different types, but they can be categorised according to themes based on their names. For example, mind, body, blood and soul are all constituent parts of a human; cosmic and astral pertain to outer space; nature is in Guthix, law is in Saradomin, and chaos is in Zamorak; and life and death occur in time. The six combinations runes (mud, mist, lava, smoke, steam and dust) cover all possible pairs of the four elemental runes.

When the humans first came to the realm of Gielinor through the World Gate in the First Age, Guthix created runestones, allowing the humans and other sentient races to practise the Magic arts. These runestones were created by Guthix using an ancient artefact called the Stone of Jas, which he found on Gielinor when he arrived.

In the Second Age, the humans continued and expanded the practice of magic. However, the runes that Guthix had provided began to dwindle and became a much sought after commodity. Many mages such as Dahmaroc had to fight each other for runestones. During one such fight, Dahmaroc was turned into stone himself, becoming what he once sought after so much.

At some point in the Second Age, the ability to craft runes was discovered when V - a Fremennik Seer - found the Stone of Jas in the Lunar Isle mine. Although the Stone was taken by 'those that walk a higher astral path', V discovered that the rocks around it had formed the Rune essence, which is a magical rock capable of absorbing the elements of Magic. He and his followers then created the Runecrafting Altars in special areas most attuned to their respective element, which then folded upon themselves to create pocket dimensions. By bringing Rune essence to these altars, runestones could be created. Many of the Fremennik thought that creating runes was blasphemy, as they were tools of the gods, and that they should only use the runes Guthix crafted for them. V and his supporters then split off and formed the Moon Clan, who use Lunar spells instead of the traditional spells.

By the time of the Fourth Age, the runestones that had been given by the gods had all but depleted due to the heavy use of Magic during the God Wars. The art of magic faded with the supply of runes, until essentially being lost to humans altogether.

At the start of the Fifth Age mainland Humans discovered Runecrafting when they discovered a Rune Essence Mine in the frozen north. After finding the essence, they soon after discovered the magical temples that the moon clan had created, and that the essence could be crafted there. Runecrafting soon became widely used in many locations. The Wizards' Tower was then formed, and became the greatest institution of magic in the land.

In year 70 of the Fifth Age the Wizards of the Wizards' Tower discovered how to solve the teleportation problem by routing teleports through another plane: the Abyss. This would allow them to teleport directly to the Rune essence mine from anywhere in the world, which would greatly increase rune production. However there was a disagreement over exactly who should get the credit for the discovery, and the source of the actual spell, a Zamorakian demon, was unacceptable to the Saradominist Blue Wizards. The Blue Order abandoned the ritual to create a teleport "anchor" mid-casting, which caused a fire which destroyed the original Wizards' Tower, a catastrophe blamed in later years on the Zamorakian Red Order. The only survivors of the fire were Perien the Blue and Kelavan the Red. Perien founded a new Wizards' Tower on the site of the old one, and became its Archmage. Due to what happened to the first tower, which was a collaboration between followers of many gods, Archmage Perien restricted access to the tower to Saradominists only, and started teaching the teleport spell to the Rune essence to only a select few people so that the Essence didn't fall into the wrong hands.[1]

While anyone magically proficient was capable of crafting runes, due to the fact that the essence mine was locked to all but Saradominists, any runes that were in circulation were made by them only. Their distrust of the other gods' mages meant that they often tried to plot ways to access the mines, or at least get their hands on rune essence or crafted runes.

In year 169 of the Fifth Age, Wizard Finix, a new student, wrote a theory in which he believed that the runecrafting altars' energy were finite and that they would run out in the future. The senior wizards could not disprove this theory, as they believed that the altars had infinite energy, but Fenix also believed that it would be possible to create runes by siphoning energy from around them. He had attempted this on Gielinor, but failed, either because the theory was incorrect or he was not proficient enough in Runecrafting. Wizard Elriss, who was not fully convinced of the theory, but wondering if he was correct, opened up more of Runespan, the plane in which the Runecrafting Guild was based in, so that proficient runecrafters could practice siphoning.

However, free players can only craft runes up to body runes (using the Runecrafting skill). Free players are also limited in the runes they can find in stores and that can be bought on the Grand Exchange. The two magic stores outside of the Wilderness (in Varrock and Port Sarim) only sell the basic elemental runes, chaos runes, and death runes. The other types of runes can be obtained by trading with other players, item drops or spawns, or bought on the Grand Exchange in Varrock.

Elemental runes and catalytic runes are given to players who are participating in Fist of Guthix, Dominion Tower, Barbarian Assault, or Stealing Creation. They are substitute for other runes. However they can only be used in combat spells. If a player tries to cast a non-combat spell, they will receive a messages saying You did not come here to do that!

The members-only Lunar spell Stat Spy can be cast in Fist of Guthix, despite not directly affecting combat. These runes cannot be dropped. If they are dropped in the Fist of Guthix waiting room, they will be lost immediately. You will have to exit the waiting room and enter again to get them back.

The Wizards' Guild in Yanille has the cheapest rune shop available to members. Located on the guild's upper floor, it sells every rune in the game except for astral, cosmic, and combination runes.

Only members can use the runes listed below.

These runes are members only, and act as one of each of their composite runes. To make them, you will need some elemental runes, a talisman of the same element, and an equal amount of pure essence. You must then take these items to the secondary elemental temple, and then use the elemental runes or talisman on that altar. For example, if you wanted to make dust runes, you would bring air runes, pure essence, and an air talisman to the earth altar; alternatively, you could bring earth runes, pure essence, and an earth talisman to the air altar. The talisman will be consumed as the combination runes are made.

Runecrafting is the skill of crafting runes from rune essence or pure essence. Through this skill, players can create their own runes for use in magic.

Players can get runes as a possible reward from Fire spirits. The runes obtained cannot be selected however.

Runes can be obtained by completing Ali Morrisane's Rogue Trader minigame, which players may complete after finishing The Feud quest.

After completing the minigame, players are able to obtain runes for a cheaper price.

Here is a short list of respawn locations of runes throughout RuneScape.

The best place to get rune respawns in F2P is in the Dark Warriors' Fortress. The northernmost room contains respawns of 5 Earth, Water, Air and Fire runes. The room directly west of this contains 5 Chaos, Mind and Body runes. Players should be wary when approaching this area: Although this a good place for a rune spawn, the Wilderness is nevertheless a player-killing zone. It is not usually crowded and can be a good place for low levelled players to gain a few magic levels on the Dark Warriors.

There are several shops around RuneScape that sell runes. These are identified with the Magic shop icon (

) on the minimap. Only the shop in the Mage Training Arena stocks combination runes.

All magic weapons (both wands and staves) in Daemonheim have the energy to provide infinite runes of all four elements, except the following which can only provide one type of elemental rune.