From the RuneScape Wiki, the wiki for all things RuneScape
Jump to navigation Jump to search
Entrance to War's Retreat

War's Retreat is a hub for PvM activities and is designed to provide amenities helpful for fighting bosses. To access the hub, players need to be at least combat level 60 or have at least 1,000 total level. Like the Max Guild, War's Retreat contains a bank, a campfire for raising the player's max life points, and an altar which restores a player's Prayer and Summoning points. The retreat can be accessed by touching War's Insignia found north of the Draynor Village lodestone next to Death's Hourglass and by entering the doorway found in the western part of Death's office.

The hub is accessible to free-to-play players. However, they cannot purchase the elder campfire upgrade, auras, and refreshers from War. They can attune boss portals to free-to-play bosses (namely the giant mole and the King Black Dragon). 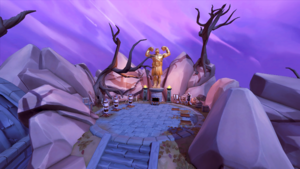 The dummy area on the eastern side

There are four boss portals located in the retreat:

The portals may be reattuned for 100,000 coins, or 50,000 coins if the player has 100 kills of the boss they are attempting to tune the portal to. As these are boss portals, they do not have access to airut, tormented demons, glacors and Bork that the Max Guild portal offers.

Next to the portals are two inert adrenaline crystals. They are unlocked at 1,000 boss kills. Players can siphon adrenaline from the crystals, gaining +25% adrenaline every 1.2 seconds (2 game ticks). The player stops siphoning them when they reach 100% adrenaline (110% if the Heightened Senses relic power is active) or if the player is carrying an adrenaline urn, when the urn reaches 1,000% stored adrenaline.

War's Wares is a reward shop offered by War.

There were multiple additions to War's Retreat that were originally planned, but not released with the initial update.[3] These features may be added in a future update.

The grouping area was created to help players find groups to boss with. While in this area, icons would appear above the player's indicating if you are looking for a group or group for a particular boss, this would work based on the Grouping System. Upon completion of your group the icons above the players head would disappear, the icons would only appear if a player was in that area.

A noticeboard for seasonal hiscores if they reoccur.[4]