The Phoenix Lair is a single-player Distraction and Diversion. Players must have completed the quest In Pyre Need to enter the Phoenix Lair. This D&D can be done once per day resetting at 00:00 UTC and requires 51 Slayer.

Phoenix Lair is near the Piscatoris Fishing Colony. Players can get to the area by walking or one of these methods:

In the Phoenix Lair, players must navigate through a series of caverns and optionally fight against the aggressive reborn monstrosities that can teleport to attack the player if another reborn is already attacking the player. The monsters that may be encountered are:

In each of the first five caverns, players collect twigs from trees. These will later need to be cut into ribbons which are then used to build the phoenix's pyre in the last cavern calling the Phoenix to battle.

The Phoenix has a Combat level of 84, her main attack is Magic-based, and she is weak to arrows. She also has an unblockable dust attack, which lowers Attack, Ranged, and Magic level by approximately 50 percent for a few seconds, nullifying stat-boosting potions.

When the Phoenix has been defeated, she crawls onto the pyre. The player can then light the pyre to set it alight, and the Phoenix is consumed by the flames to be reborn. Once she reappears, the player can talk to her to receive the reward and to optionally engage in some dialogue.

Logging out, using an "Escape" exit, or teleporting before the Phoenix's pyre has been lit will require you to start over, even if you have already finished the battle and the Phoenix is wounded. If you forget to talk to the Phoenix before exiting the cave, the next time you enter the cave system you will be in her cave and be able to obtain your quills.

The fastest way to complete the Phoenix Lair is to pay 10 unnoted phoenix quills at the entrance to go straight to the last chamber and start the fight with the Phoenix.

Players who wish to complete the Phoenix lair as fast as possible but without paying 10 Phoenix quills should follow the following guidelines: 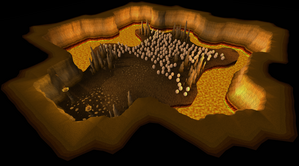 A player receiving a phoenix egg

Reward for completing the Phoenix's challenge each time:

Arise from the Ash (