From the RuneScape Wiki, the wiki for all things RuneScape
Jump to navigation Jump to search
"Goldberg" redirects here. For the wizard, see Wizard Goldberg.

The Rune Goldberg Machine is a Distraction and Diversion that involves using the Rune Goldberg machine, invented by Wizard Goldberg, to turn runes into vis wax, a substance with a variety of effects. It is located in the eastern section of the Runecrafting Guild, giving it a requirement of 50 Runecrafting to access.

This activity cannot be reset by a D&D token. It also does not reset when a player is a non-member; if a player completes the activity before their membership expires and becomes a member again at a later date, they must wait until the following reset before the machine can be used again.

The Rune Goldberg Machine accepts three different rune types at a time, assigning a different value to each rune. These values are indicative of the efficiency of that rune type when actually used in that slot. It accepts any rune, with the exception of Armadyl runes. These values change daily. Players can insert runes into the machine to see their value, but for every combination tried, the required amount of runes of each of the three types selected will be increased by 0.5% (resets daily). The total value of the runes affects how much vis wax is created.

The following table shows the profit and number of runes of a particular type that are required to feed such runes into the machine, assuming the player has obtained the maximum vis wax of the slot (as 0.5% is charged even on the first try). Lastly, it is assumed that vis wax is sold for its median price: 17,959 coins.

Note: There is currently a bug where the Combine button may appear as disabled. In this case, simply close the interface and click the machine again. 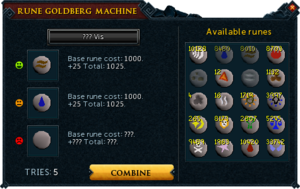 The interface when operating the machine

If Goldberg is asked for help with the machine, he will suggest a particular rune which has been previously shown to him by another player. Be aware that this suggested rune can carry over from the previous day and may not be a good rune anymore. If after trying the suggested rune and all combinations for the slots you still have a low amount try swapping the first rune for something else.

The "perfect" rune for a slot may not be the best rune to use as it is possible that a cheaper rune choice might be more profitable. As an extreme example, if the "perfect choices" happen to be the three most expensive runes (see the GE prices, in the table above), you might be paying more in runes than what you get in vis wax. Experimenting with combinations of only cheaper runes makes it easier to make a profit.

The first slot can be predicted by looking at the value 40 days prior, except that the machine will rarely deviate and choose a different rune thus making a new pattern. The prediction for today and the next few days is (Update)