From the RuneScape Wiki, the wiki for all things RuneScape
(Redirected from Emote)
Jump to navigation Jump to search
The Old School RuneScape Wiki also has an article on: osrsw:Emotes 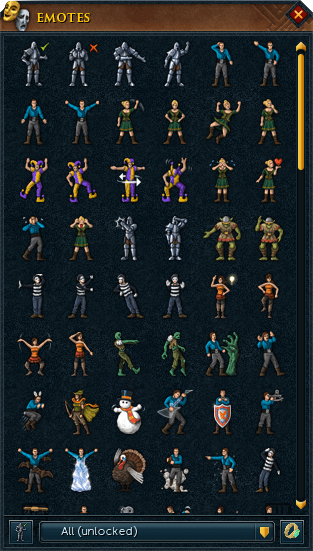 Emotes are animations that a player can select for their character to perform. Before Quick Chat was released, emotes were one of the only ways for muted players to communicate. Most emotes may be unlocked by free players, but there exists certain emotes that only members may unlock. All emotes are usable in any server, be it free player or paying player servers. 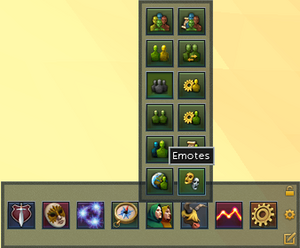 Emotes tab of the Community popup of the Ribbon interface.

Emotes are accessible with the Emotes tab found on the Community popup of the Ribbon interface.

Emotes are used primarily for entertainment, amusement and communication. Emotes are also used for certain clue scrolls and quests. They generally do not give any bonuses or in-game advantage to the performing player.

Emote icons that are bright in colour represent emotes that you have unlocked; either by default, or through the completion of a circumstance. On the other hand, dimmed out emote icons represent the emotes you have yet to unlock. Though the icon itself is obscured showing mostly the black frame, one can still hover over each locked emote to know its name, while clicking it hints what you have to do to obtain it.

Default emotes are emotes unlocked upon creating an account. Thus, all players readily start off with 23 emotes regardless of gameplay progress.

These 23 emotes comprise of simple animations mainly for communication in complement with the chat system, though they are also be used in treasure trail as a part of completing a clue scroll. One may use emotes when muted in means of communicating with others.

A player performing the Dance emote.

These emotes are related to certain quests. Quests emotes can be unlocked during a quest or as a reward after completion of a quest.

Though previously, all quests related to these emotes required membership subscription to be started, two of the three have since been made free-to-play, meaning that the Troubadour Dance and Pulled Away emotes are no longer members-only.

Emotes under this category pertains to the nature of a particular gameplay or activity on RuneScape. These emotes can only be encountered if the player reaches a point in gameplay and their requirements to be unlock vary vastly.

These emotes are related to the discontinued random events. Players must be presented with the event itself and complete it to unlock the emotes. Presently, random events emotes may be unlocked via Iffie of Thessalia's Fine Clothes.

When completing either the Mime or Gravedigger random event, players are rewarded the usual random event gift and would have the option to unlock an emote, along with either the typical costume piece or fixed number of resource rewards. Following an update on 24 October 2012, random events were removed all together and the emotes were temporarily discontinued until they were made complimentary with a purchased costume part from Iffie in Varrock on a later date.[1]

These emotes are related to certain achievements in the game. Achievements emotes vary in requirements, conditions and restrictions of method to be unlocked.

The Cape emote is unlocked by default, though is categorised as an achievements emote due to the restriction of skill mastery. Without an eligible cape, the message: You need to be wearing a skillcape in order to perform this emote. will appear in the chatbox even though this does not necessarily work with only skillcapes.

A player performing the Taskmaster emote.

These emotes are related to the Stronghold of Security. Player security emotes are unlocked level intervals of the dungeon from the central chest.

A player performing the Stomp emote.

This emote is related to the Misthalin Training Centre of Excellence or the Stronghold of Player Safety. The Safety First emote is unlocked depending on the registered age of the player's account.

This emote is related to the Court Cases distractions and diversions, which in general requires completion of the quest King's Ransom to be started. The Faint emote is unlocked after completing a specific court case.

These emotes are related to the Hefin Agility Course of the elven city Prifddinas. Hefin emotes are unlocked in random order as a possible reward from a light creature when completing laps on the agility course.

In general, Prifddinas requires the completion of the quest Plague's End and it's preceding elf quest series alongside the required level 77 Agility to access the course.

Emotes in this category are mainly emotes with strict restrictions requiring players to be in a specific place or a specific form to be executed.

Penguin emotes were first encountered during the Cold War quest in which a sequence was used to convince the penguin at Ardougne Zoo. After the quests, players may reaccess the emotes by wearing the suit via Chuck or Jim as many times as pleased.

Acrobatics emotes are found under the Minigames tab instead of the usual Emotes tab, due to the fact that these emotes are considered as acts. Higher level in the Agility skill will allow the player to succeed in a wider variety of acts that accumulate higher point score and also experience in the skill.

A player performing the Backflip emote.

These emotes are related to the clan citadel. Clan theatre emotes are a unique set of emotes that are visible by default in the Emotes tab if the player is in the vicinity of a clan citadel, though they cannot be played anywhere around the citadel except the clan theatre itself.

Clan theatre emotes comprise of dramatic theatrical animations used in plays and acting scenes in the theatre. One can only build a clan theatre once the citadel is at least tier 5.

Emotes under this category pertains to the recurring holiday and world events which until today is part of RuneScape tradition. These emotes can only be unlocked by partaking in one of the many events, either just by participating, completing or in exchange for a event's unique currency.

These emotes are related to holiday events. Holiday events emotes are unlocked upon completion of a seasonal event of a particular year, and are unique to the events as they cannot be unlocked by any other means.

Players were introduced the first holiday emote during the 2005 Hallowe'en event, which was the emote Scared. Unlike other holiday rewards, all previous holiday events emotes will be unlocked given that the player completed the event on that particular year.

A player performing the first ever unlockable holiday events emote, the Scared emote.

A player performing the Rockin' Around the Tree emote.

A player performing the Celebrate Emote.

These emotes are related to world events, the Battle of Lumbridge, the Bird and the Beast and Tuska Comes. World events emotes are purchased using a currency known as renown or Reward Currency from the respective quartermaster of a player's chosen faction.

Emotes unlocked from world events are discontinued and do not return on succeeding world events, excluding those that are from the third world event, which only increases in cost.

Emotes under this category pertains to microtransactions, which is a form of legal real-world-trading involving purchased emotes via micropayments within the endorsement of Jagex itself. These emotes could only either be purchased or won directly or indirectly dependant to the current promotion (if any).

These emotes are related to Solomon's General Store. Emotes from the General Store are purchased using either Loyalty points or RuneCoins if applicable.

A player performing the Ring of Fire emote.

A player performing the ROLFcopter emote.

These emotes are unlocked with several other items as part of a pack, rather than bought individually.

Squeal of Fortune was also the host of RuneScape's first ever Valentine's Day promotion, which introduced Valentine-themed emotes.

A player performing the Sunbathe emote.

These emotes are related to Treasure Hunter, the precedent of the previous Squeal of Fortune. Emotes won from Treasure Hunter are discontinued unless stated otherwise, and could be won directly or indirectly as a prize during a certain promotion.

Treasure Hunter is the host of the first ever Talk Like A Pirate Day promotion, and continued the legacy of past Valentine's Day and Hallowe'en promotions, all which introduced new emotes as well.

A player performing the Loved Up emote.

A player performing the Walk the Plank emote.

The emotes are related to the time-limited Yak Track event.

Several items have built-in emotes, usually known as to operate an item, which are unique to the item itself. Such examples include but are not limited to, items like the rubber chicken, Chocatrice cape, Silverhawk boots, elven clan capes, holy cithara and so forth. As such, these special emotes do not appear in the standard emote menu, and must be manually operated by the options provided on the item unless stated otherwise.

All items were once given the option to be operated. However, this option has since been discontinued and the remaining items that can kept this function were directly known by their item emote name.

The operate function of an item may be a right-click option in the inventory, or in an equipment slot.

Emote enhancers are specific equipment items that when worn, prompts an emote be performed differently from the usual animation.