Tower of Life is a quest in which a group of alchemists attempt to create a living being. It features some difficult choices about the future of this creature.

Builder of the Year[edit | edit source]

Begin the quest by heading to the Tower of Life south of Ardougne and just south-west of the Necromancer's Tower. Fairy ring DJP is very close by. Once at the tower, talk to Effigy. Effigy, an alchemist, wants you to convince the builders, who are on strike, to complete the tower that he believes will change the world. He will tell you speak to Bonafido, the head builder, if you want to help.

Talk to Bonafido, near the tower's entrance, who prevents you access into the building. To be the man for the job, you need to look the part - Bonafido will let you in, if you suit up in a builder's outfit. You need a hard hat, some builder's trousers, a builder's shirt, and a pair of builder's boots. Talk to the other builders to get them.

Talk to Gummy and ask for trousers. He says that he was drying his trousers on a line by the shore, after which they went missing. Search the plants - the ones south-east of the tower, near the ocean - to find the Builder's trousers.

Talk to "The Guns", who wants a beer. If you do not have it already, you can buy beer from The Poison Arrow pub in East Ardougne. Return to The Guns, and exchange the beer for the shirt.

Talk to Black Eye, who is willing to part with his hardhat, if you can answer his questions based on construction correctly.:

Once you've acquired all the items, put them on and go talk to Bonafido. You must answer some questions from Bonafido, who wants to test your attitude as a builder.

After answering these questions, Bonafido recognises you as a bonafide builder, and lets you enter the tower.

A quick survey of the tower shows that it houses three important, but unfinished systems - a pressure machine, a pipe system, and a strange cage at the top. A hammer and saw (or crystal saw) are needed to fix these machines.

All the required items are on the ground floor[UK]1st floor[US] in crates. Each crate contains one type of resource - search them multiple times to gather more of the same material. 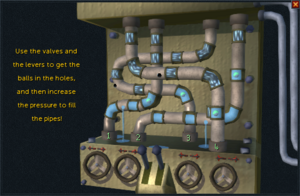 Climb up to the 1st floor[UK]2nd floor[US], where you see the pressure machine on the north wall. The machine is broken and water is leaking from various parts. Using the items that you collected, repair it. The valve wheels are used to complete the water-flowing mechanism, whereas the coloured balls are being used to block the leaks in the pipes. To do this, follow the given instructions:

After the dialogue states that you've fixed the leaks, make sure that there is water in every section. Once this happens the puzzle screen will disappear.

I Want to Play a Game[edit | edit source] 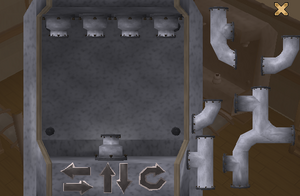 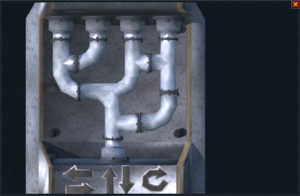 After fixing the pressure machine, move on to the 2nd floor[UK]3rd floor[US], where you stumble onto a broken pipe machine. Collect the required items from the ground floor, if you haven't already. Construct the machine using the pipes and rivets.

You will now need to solve a rather simple puzzle, similar to a jigsaw. Using the arrows at the bottom of the screen, move the pieces into their correct positions, as illustrated on the right. As soon as you put a pipe in the correct location it will lock in place. You only have to rotate the largest piece, the rest are in the correct orientation when you start.

Using the image on the right as a reference, move the pipes, one by one into their respective places.

The machine is now working! 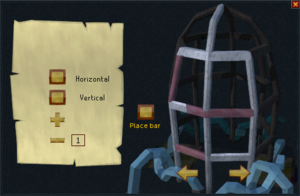 Once the machine starts working, collect the remaining items from the crates at the ground floor[UK]1st floor[US]. Finally, climb up to the top floor of the tower, where you will find an unfinished cage. Build the cage using the items, and a puzzle will appear.

Clicking the horizontal or vertical button will make a bar appear. The bars can be changed in size by using the '+' and '-' sign. The bars initially start off at size one. Click "place bar" to fit the bar at the broken areas.

That side of the cage is now complete. Now click the right arrow on the cage to turn the cage. As a precaution, an attempt to place another bar will give you the message "this side is complete" to let you know you are finished with that side.

That side of the cage is now complete. Turn the cage using the right arrow.

That side is complete; turn the cage.

Now that the cage is complete, the puzzle screen should disappear. 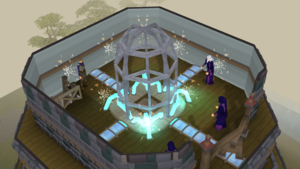 The Homunculus is born.

Once all the three machines are properly fixed, you must go back to the ground level and talk to Effigy. He will be delighted that you've finished the tower and disappear to the top of the tower, along with the other alchemists. You decide to join them.

Go back up to the top, where a long cut scene plays, in which a Homunculus is brought to life. To your player's surprise, the three alchemists mistreat the creature. They run away in fear when it proves able to cast a powerful magic spell.

Go back to the base of the tower and talk to Effigy. Unsurprisingly, he wants you to go back and confront the monster and hopefully calm it down, so that they can carry on with their experiment. Once again, return back up top. 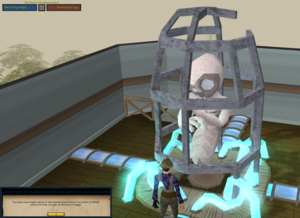 Helping Homunculus with magic or logic 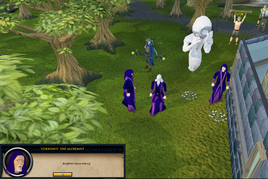 One last time, return to the outside and speak with Effigy. The Homunculus will appear and scare off the alchemists and will want to speak with you again and tell you to meet him in the basement of the tower. You can get in there by using the trapdoor on the south wall. Go into the dungeon and talk to the Homunculus once more to complete the quest. He is located north of the ladder by the experiments table. 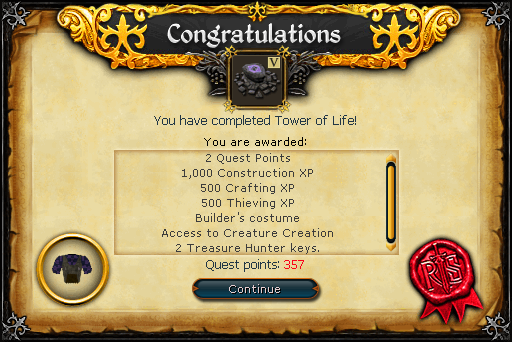 Tower of Life is directly required for the following quests/miniquests: