From the RuneScape Wiki, the wiki for all things RuneScape
Jump to navigation Jump to search
The Old School RuneScape Wiki also has an article on: osrsw:Cold War
For the achievement, see Cold War (achievement).

Cold War is the first quest in the penguin quest series. It involves two agents finding out about the plans of the penguins.

At the Ardougne Zoo, one of the zookeepers has become a bit preoccupied by penguins. In fact, he's downright paranoid about them. He needs your help to observe their habits on the iceberg in the Lunar Sea.

What begins as a peaceful bird-watching expedition opens a new world of espionage and bad musicians.

Speak to Larry at the southern entrance of the Ardougne Zoo, located in the southern section of East Ardougne. He seems a bit paranoid, and is looking for somebody to help with his "research project" - on learning about the habits of penguins in their natural environment.

He instructs you to collect 10 oak planks and 10 steel nails for building the lookout, and to meet him at the entrance to Keldagrim just east of Rellekka. If you have the materials in your inventory, talk to him again and he will directly teleport you to the lookout location.

He can otherwise be found on the pier north-west of the Keldagrim entrance in Rellekka (the fairy ring code dks, Fremennik Province lodestone, lyre teleport, polar eagle ride or teleport to house (if your house is in Rellekka) can be used to reach the pier). 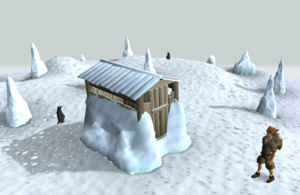 Upon arrival on the Iceberg, look for a firm snow patch next to Larry. Build the bird hide structure here by using an oak plank on the patch. Click on the lookout again and you will be prompted to cover it in snow using a spade. When the snowy bird hide is ready, speak to Larry.

You see a rather strange cut scene, but it is important to keep note of the emotes that the penguin does as it shows a penguin greeting code that is unique for every player. If you do not keep note of these emotes, you can click on the bird hide to observe the penguins again, or alternatively read it from the quest journal later. There are 8 different penguin emotes in all, similar to the normal character emotes, and the greeting will consist of three of those. 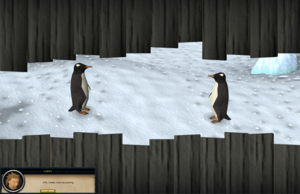 After the cut scene, speak to Larry and suggest to him that the behaviour of the penguins in the cut scene was suspicious. He insists that you move on to the docks to prevent eavesdropping. Return to the dock and speak to Larry again; now here's where things get strange. Larry wants you to spy on the penguins by creating a penguin clockwork suit. He gives you a book filled with instructions on how to make one.

Spying on the penguins

To make a clockwork suit:

If you haven't already made a Crafting table 3 in your house, you will need 4 oak planks, 3 molten glass and a workshop in your house, along with 34 Construction, using boosts if required. You need to create the Crafting table 1 with the planks, and then upgrade it to a level 3 using the molten glass. A friend's house can be used, but it shouldn't be too hard to make your own table.

Return to Larry at the Fremennik Province (north-east of Rellekka) dock or Ardougne Zoo after finishing the suit. Jointly return to the Iceberg to test the suit out. After returning, you see that the lookout has been completely destroyed and that all the penguins are missing. Speak to Larry and, no surprise, he blames the penguins. Now, since there are no penguins, it appears impossible to test the suit. However, you — the clever adventurer — suggest Larry that you test the suit on the penguins at the zoo. Larry kindly assists with a teleport back to Ardougne.

Free your hands and cape and talk to Larry. He casts a magic spell, causing the player to shrink and enter the penguin suit! Now to test out the disguise. Head into the penguin enclosure and talk to the penguin who is really an undercover KGP agent. He will be the only penguin with a "talk" option. Use the emote sequence that the earlier cutscene showed.

Fortunately, the agent responds. Now apparently, penguins are trying to learn to fly and escape from Ardougne Zoo. The penguin gives you a mission report to return to the outpost and asks you to also speak to the penguins in Lumbridge.

Exit the enclosure and speak to Larry to get out of the suit. When you tell him about the conversation with the penguin agent, Larry ponders as to how the penguins could be hiding in Lumbridge. You now need to track down the agents in Lumbridge, and Larry will catch up with you later.

Items needed: raw cod, or wearing the Ring of Charos.

Those of you who have a keen eye may already know where the penguin operatives are. If not, head to Farmer Fred's sheep pasture where you find Larry, standing on the western side of the farm; use the 'tuxedo-time' option with him. Now head off inside the pen and locate a sheep with flippers.

Before speaking to them, perform the secret greeting. Once you have done the greeting, the penguins still don't speak to you, demanding the secret phrase and also angry at attempting to blow their cover. Speak to Larry and he helps you both return to Ardougne Zoo.

Re-tuxedo before entering the penguin enclosure and speak to the penguin again. If you have a raw cod in your inventory, the penguin will trade the phrase for its favourite food, as explained by Larry. Alternatively, if you are wearing a ring of charos, the penguin simply provides the phrase, and you do not get the usual (Charm) option. Either way, the penguin will reveal that the secret phrase is "Do not trust the walrus". 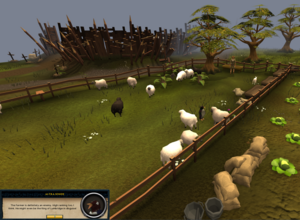 Speaking to the penguins in the sheep field, and convincing them that Fred is the king of Lumbridge

Return to Lumbridge and go to Farmer Fred's sheep pen and penguin suit up! Now the penguins tell you to talk to Farmer Fred to see if he's an undercover agent for the humans. Speak to Farmer Fred about penguins and use either the bully option or warn option; both work.

When you are done talking to Fred, return and speak with the penguin again. Pick either option in the conversation with the penguins and they give you the location of the outpost; it is on the Iceberg you visited earlier under what appears to be an avalanche. They also give you the password "cabbage". Before leaving Lumbridge go east to the cow pen and steal a cowbell for later in the quest.

Speak to Larry again to be teleported to the Iceberg. If you need to leave the Iceberg for any reason, you can return by speaking to Larry near the rock crabs east of Rellekka. 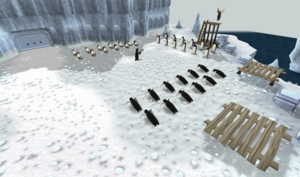 The penguin army are being drilled by the Army Commander for their invasion.
v • d • e
KGP base

Wear the penguin disguise again and head north-west until you see a KGP agent. Use the emote greeting, then tell him the password. He then asks you for an ID, which you do not have.

Now speak to Noodle, the black-market merchant near the KGP agent. He'll trade you a Kgp id card and mission report for one swamp tar and five feathers. With the counterfeit documents, speak to the KGP agent and he'll let you through. "Investigate" the avalanche behind him to enter the outpost.

Once through the door, the camera pans showing a penguin army! Suddenly, you seem to realise their intentions are a little more devious than just flying! If you speak with the Army Commander, he tells you the penguins are "Getting ready for the invasion." Follow the signs with arrows to the agility course, and when the path ends at the checkerboard starting line, click it to start the agility course.

If you want to quickly exit the course, un-equip the penguin suit, resulting in you being caught and stunned, but otherwise returned to where Larry is on the Iceberg. Also, the Surefooted Aura makes this part of the quest extremely easy. 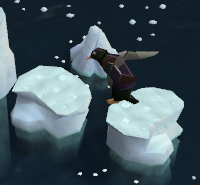 Speak to the Agility Instructor, and you are done with the agility course and free to go wherever you wish in the lair. Return to Larry and tell him what you've seen. He tells you that according to his new research, there is a secret room deep inside the glacier, where he thinks all the war plans are being made. 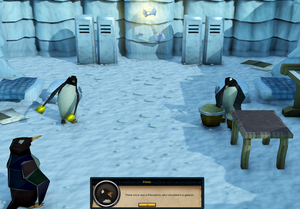 Ping and Pong with their new instruments

Have Larry put you back into the suit and return to the outpost but instead of turning left this time head straight up until you come to some massive doors. Ask the KGP agent in the little control room to the left of the doors to let you in. He says his orders are to let no one go through the doors.

Head back down the hallway and enter the second room on the east. Speak with Ping and Pong there, who represent penguin rebels and ask you for a cowbell and set of penguin bongos to replace their outdated musical instruments, as they need to make a new song.

Return to Larry and ask him how to get a cowbell and some bongos. He suggests that you steal the cowbell from a dairy cow in Lumbridge, Zanaris (gives some fun dialogue) or Rellekka (requires 15 Thieving), and make the penguin bongos by using leather on a mahogany plank. You can only make the bongos while in human form. Alternatively, you can teleport to Zanaris and talk to the dairy cow to receive a cowbell.

Head back to Ping and Pong and provide them with the bongos and cowbells. You see a cutscene where the two penguins play a song, producing enough sound to distract the guard at the control room. While the guard is distracted, operate the control panel where the KGP agent used to be standing to open the door. Enter the war room to the north-east.

You will see a cut scene of the penguins planning to take over RuneScape! Sadly, the penguins have set up a magical device which reveals any intruders inside the war room. The penguins in the room take your suit, and you are taken to a cage filled with icelords. They are level 42 and you need to kill a few before you are able to leave. The icelords use range as well as melee, so watch out.

If you teleport out and return to Larry on the Iceberg, you will be re-caught and will have to fight and kill the icelords again.

Exit the cage through the fence door made of ice, and then exit through a chasm east of the icelord cage. Talk to Larry for a final time to finish the quest. 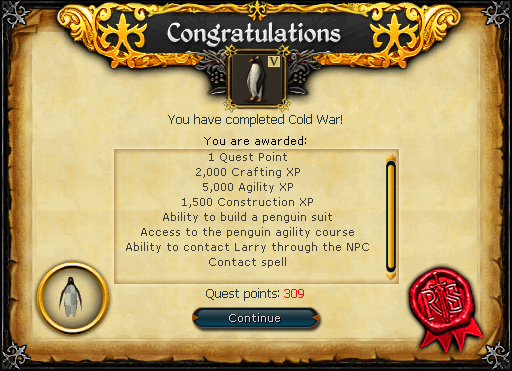 Cold War is directly required for the following quests/miniquests:

The concept of this quest is a parody of the real-life Cold War, a period of quiet hostility between the United States (with other Western Powers such as the United Kingdom) and the Soviet Union for over 40 years. Apart from the quest being named after it, the following details from the quest are references to this historical event: