From the RuneScape Wiki, the wiki for all things RuneScape
Jump to navigation Jump to search
"Spin" redirects here. For the emote, see Twirl. 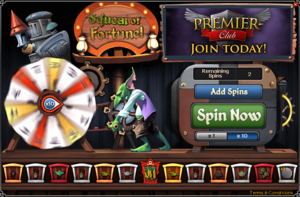 The Squeal of Fortune interface

The Squeal of Fortune (also known as the SoF or the squeal) was a daily activity available to both members and free players run by Yelps, initially introduced on 28 February 2012. It shared its side-stone interface with the Solomon's General Store. Free players got one spin a day while members normally got two spins a day. The Squeal of Fortune reset every midnight UTC. Rewards included armour, weapons, xp lamps, coins, and an assortment of equipment — some as illustrious as Lucky equipment, the untradeable counterparts to powerful existing equipment.

When a player logged in, there was a small button in the middle of the game screen which could be moved freely with the mouse. The introductory task system had to be completed or turned off for it to appear. Pressing it brought the player to the wheel, which contained a selection of thirteen items which always consisted of one super rare item, two rare items, four uncommon items and six common items. The selection of items changed from spin to spin, but logging out and then logging back in resulted in no change.

Players activated the wheel by clicking the green button a single time, which would show the graphics of the wheel spinning and stopping; they could press it again at any moment to instantly stop the wheel and produce a prize. There were two speeds at which the player could spin, both below the green button, that allowed the player to spin one at a time (×1) or using 10 at a time (×10). When the wheel stopped, the player was presented with their prize which they could either claim, convert to coins, or (in the case of winning cash bags and double spin tickets, or of a non-member winning a members only prize) discard. Active members could not spin the Squeal of Fortune while on a free world.

Note that the wheel's graphics did not necessarily reflect the odds of the wheel stopping on a particular slot. The chance of obtaining a super-rare item was significantly less than the 3 in 100 chance the wheel suggests.

The Squeal of Fortune was replaced by Treasure Hunter on 4 February 2014.

On 2 April 2012, a game update introduced a variety of new ways to obtain additional spins for the Squeal of Fortune.

When buying spins, it is important to remember that they expire in 6 months time. Daily spins expire daily if not used. Spins that are obtained through any other means do not expire.

Spins on the Squeal of Fortune are used in the following order:

For non-purchased spins, there is a cap on the number of unused spins that you are allowed. You will not earn spins beyond this amount:

Nearly every monster in RuneScape, barring those in minigames or Dungeoneering, has a chance of dropping a spin ticket. They can still drop if you already have 10 earned spins, but you will be unable to claim it until you use one.

Yelps after using a spin.

Players may gain spin tickets through any of the same methods that can be used to find a strange rock, in addition to Divination, whether they are a member or not. Unlike strange rocks, a spin ticket obtained whilst skilling with a full inventory will not replace an item of the player's, it will be redeemed automatically.

As of 24 April 2012 the completion of any quest will earn the player 2 additional spins to the Squeal of Fortune, this includes any subquest of Recipe for Disaster, the wishlists for the Rag and Bone Man and the Thieving Guild capers. Quests completed prior to this update will not count.

As of 19 September 2012 a free spin is given for completing a daily challenge, totaling to between 28 and 31 extra spins a month if every days' challenge is completed.

Players can purchase Bonds for gold coins or cash and redeem the bond for 8 spins.

When on the claim screen a free spin button may appear which, when clicked on, will have the player watch a short video ad then award one free spin. These ads do not seem to appear in the downloadable client, only when playing on your browser. Not every country, however, has ads available for players, and thus some players will not receive this chance for a free spin. Use of third-party ad-blocking browser extensions may also prevent this option from appearing. 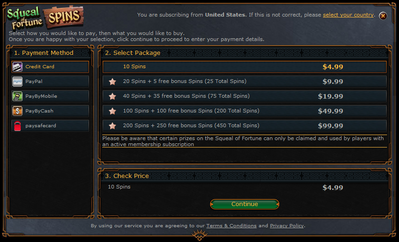 If a player joins the Premier Club and purchases a silver or gold package, the player will be granted one additional spin each day as long as the player remains signed up as a Premier Club member. This amounts to 3 spins a day, as opposed to 2 spins a day for players who are only members.

The Premier Club offer ended in January 2013, however, it made a come-back in December 2013.

There are also packages available to some countries residences using game cards available for $10 or $25, and offer a range of options when redeemed, some of which include spins:

Most items are deposited directly into the players bank; however, experience boosting items such as XP lamps or any pendant of skill are placed in the player's inventory. If a lamp or pendant is won and one's inventory is full, or another prize is won and one's bank is full, the player will be unable to claim the prize. Exiting the Squeal of Fortune interface and clearing an item will allow a player to claim the prize upon re-entering the Squeal of Fortune interface.

Every item on the Squeal of Fortune (except for double spin tickets and money pouches) has the option to be converted into a predetermined amount of coins. Items exclusive to the wheel convert into a set amount of coins with price increasing with rarity.

The main controversy over the Squeal of Fortune is that it is considered to be a form of real world trading by a number of players, due to the fact that many items from the Squeal of Fortune either have a significant gold or xp value. However, Jagex's official stance on the rule is that real world trading is only an offence when it involves a third party.