From the RuneScape Wiki, the wiki for all things RuneScape
Jump to navigation Jump to search
The Old School RuneScape Wiki also has an article on: osrsw:Creature Creation

Creature Creation allows players to make unique monsters, which can be attacked for their drops. Some of the monsters drop multiples of items that are otherwise hard to get or expensive to purchase, such as unicorn horns, which are used to make unicorn horn dust for Herblore and Unicorn stallion pouches for Summoning.

Some of the monsters are dangerous, so players needing food while creating creatures can pickpocket the workers outside the tower to obtain Triangle sandwiches. 'Black-eye', 'Gummy', 'The Guns', and 'No fingers' can be pickpocketed, but not Bonafido.

There are six Altars of Life used to create creatures: 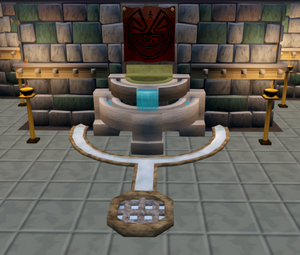 An Altar of Life.

Placing one each of the two items at the correct altar primes the altar, and activating the altar creates the mixed creature. All but one of the monsters in turn drop one of their ingredients in quantity (at least two) on each kill. (The swordchick only occasionally drops raw chickens but always drops feathers, which is not one of its ingredients.)