Court Cases are a Distraction and Diversion that is accessible after completing the King's Ransom quest. It was released on 9 June 2010 along with a developer blog which provided some insights into its development. Players also require level 65 Attack if they wish to prosecute or 65 Defence to defend during the case. The first court case can be tackled for free, but players must obtain a court summons to attempt court cases thereafter. Court Cases have a variety of rewards, including a total of 142,000 combat experience if all cases are completed.

Completing all of the court cases completes the achievement All Rise, which is a requirement for both the trimmed completionist cape and master quest cape. 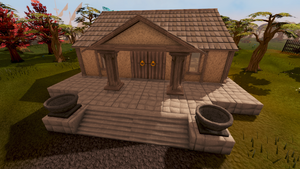 Players can take on their first court case immediately after the completion of King's Ransom by talking to the clerk in the Seers' Village Courthouse. The clerk will give the player their first case, which also acts as a tutorial, Mugger v. Roger Murray. 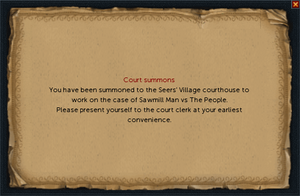 Court summons are necessary in order to tackle court cases after the first case has been completed.

Court summons can only be obtained if the player does not have an active court case, does not already have a court summons, and has completed King's Ransom. They can be obtained through a variety of means:

When a player has a court summons, they can start the case by talking to the Clerk in the Seers' Village Courthouse and choose either to defend (requires 65 Defence) or to prosecute (requires 65 Attack). This choice will affect how the events of the case play out and the actions the player must take to succeed but do not affect final rewards.

Players should begin each case by taking any relevant documents from the filing cabinet. These include: 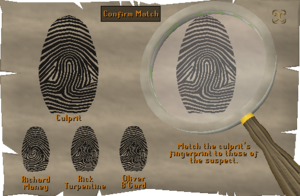 Once these items have been obtained, there are a number of activities a player can carry out before the trial, depending on their current case. The player should first read all court documents in order to learn the details of the case, as well as match any fingerprints. The court documents will often inform the player of which characters can be interviewed prior to the trial, as well as the location of the characters in question.

It is also possible in some cases to inspect the crime scene using the crime scene viewing orb. When inspecting a crime scene, players can use the magnifying glass to closely inspect certain objects and find additional clues which may help in the trial.

It is usually not necessary to perform every possible action before the trial, but each action taken can open up new arguments or interview questions during the trial, increasing the players chances of convincing the Jury and ultimately succeeding in the case. 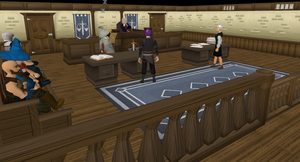 When ready, the player may enter the courtroom to start the trial and argue their case, as they did in King's Ransom.

Cases start with the prosecution and then follow with the defence. During the case, players can talk to the judge in order to question witnesses or present evidence. The player can often only question witnesses if they interviewed them before the trial. In addition, the player may be unable to present certain evidence or make specific arguments about it if they did not discover enough about it before the trial.

Players are advised to carefully consider the evidence they present, the witnesses they question, and the questions they ask. Good choices can greatly help, but poor choices can hinder it.

Once the player is satisfied with their case, they can conclude the case and move to the verdict. In most cases, the player will be able to summarise their case to the Jury whereupon a specific Jury member can then be chosen and appealed to. For more information on selecting a Jury member, see Appealing to the Jury below. 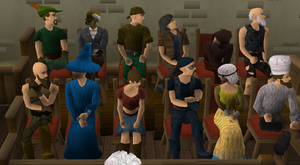 If the player is successful in convincing the Jury, they are rewarded with a combat XP lamp and some items depending on the specific court case tackled. See Rewards below.

If the player is unsuccessful, the Jury will return an 'undecided' verdict and the judge will explain that the player needs to make their case clearer. The player will be returned to the clerk's room, keeping all of the necessary case files, and can proceed downstairs to try again as many times as needed until the case is won.

If the player chooses to abandon the case, the clerk will take it away and the player must obtain a new court summons before they can try again.

The Jury agrees with you

The Jury is bored

The Jury must be convinced by the player's arguments in order to succeed in each case. Depending on the choices made, the Jury will respond in one of three ways to each witness or piece of evidence:

The Jury will not respond further to any piece of evidence or witness which they have already given a positive or negative response for. This means that players cannot "undo" poor choices made during the trial.

Appealing to the Jury[edit | edit source] 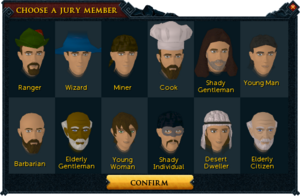 When summarising their case, players can choose a Jury member to appeal to. Depending on the choice made, the outcome of the case can be influenced. Each jury member has a different personality which will determine how well they respond to the summary depending on the individual case. Wearing the ring of charos (a) while hovering the mouse over Jury members will show their personal background and interests, which can help when choosing which Jury member to appeal to.

There are a total of 16 cases, all of which have guides listed below. There are often several paths to victory in a court case; the guides are not definitive but show one successful path. Players may view which court cases they have completed by interacting with the clerk and choosing the "Check cases." dialogue option.

If the player is successful in prosecuting or defending the suspect, they are entitled to a reward. Players can collect their reward from the clerk on the ground floor[UK]1st floor[US] of the courthouse. Players are unable to obtain another court summons until they accept the reward.

Each case will award one or more mystery boxes as well as a combat XP lamp which gives a varying experience reward (depending on the case) in a chosen combat skill. Some cases award additional items, and further rewards can also be obtained upon completing a specific number of cases.

The net worth does not include the value of any items found inside mystery boxes.